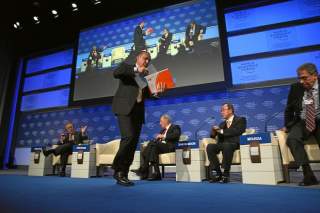 Turkish Prime Minister Recep Erdoğan’s declaration regarding the 1915 Armenian killings was not, in itself, a surprise, coming just ahead of the April 24 commemoration date. However, the conciliatory language used in the statement was quite different than previous Turkish characterizations of the events during which the Armenian community of the Ottoman Empire underwent deportation and near total destruction at the hands of a collapsing state. The statement, which was issued in eight languages other than Turkish, including Eastern and Western Armenian, recognized the particular significance of the day for Armenians around the world, described the historic events as “inhumane” and conveyed condolences to the grandchildren of those who lost their lives.

While falling short of acknowledging genocide, the declaration marks a fundamental change in Turkey’s approach to dealing with the events during which up to 1.5 million Armenians perished. Understandably, the wounds between Armenia and Turkey run very deep. The statement could help to resuscitate the shelved rapprochement between the two nations, but reconciliation will need to be backed by a genuine effort to “better understand historical issues” and to approach the differing accounts “with empathy and tolerance.”

It has now been nearly five years since the signing of the diplomatic accords between Armenia and Turkey, commonly known as the protocols. The documents were meant to establish relations and open the borders between the two countries that have been closed since 1993 in response to the Armenian occupation of areas surrounding Nagorno-Karabakh in Azerbaijan. Meticulously mediated by Swiss and American diplomats, the protocols aimed to lay the groundwork for a historic reconciliation process between Armenia and Turkey ahead of the centenary of the Armenian genocide in 2015. Unfortunately, both the Armenian and Turkish sides ran into obstacles and domestic political sensitivities that caused the initiatives to lose traction and stall before they were ratified by their respective legislatures.

Currently, there are no official relations between Armenia and Turkey. Yet, informally, there is a great deal of activity taking place. Most importantly, economic relations continue, mostly in the form of trade via Georgia. The absence of official relations makes it difficult to gauge the extent of such ties. Official Turkish statistics show a trade volume of only half a million USD for 2012 and 2013 in contrast to Armenian national statistics that show imports from and exports to Turkey at about $214 million USD in 2012. However, an Armenian civil society activist familiar with business relations between the two countries estimates that the true figure is closer to half a billion USD in 2012.

Aside from trade, there is also commerce-based movement of people between the two countries, again mostly via Georgia. Both countries allow their nationals to travel to each other’s countries, and migrants often enter via multi-entry tourist visas and simply overstay. Turkish official statistics put the number of Armenian nationals visiting Turkey at 71,000 and 73,000 in 2012 and 2013 respectively. This figure stood at only 17,000 a decade earlier when travel restrictions still existed. The number of Turks visiting Armenia, however, is negligible. The discrepancy can be partly explained by the large number of Armenian migrant workers in Turkey. Although there are no official figures, thousands of Armenian women come to work as domestic help in middle class families in Istanbul and some of the other major cities of Turkey. In 2010, Turkish Prime Minister Erdogan estimated that 170,000 Armenians were living in Turkey, of which some 100,000 were not Turkish citizens.

Nevertheless, the level of economic and people-to-people contact falls well short of the level that could be achieved if the border between the two countries were open. Currently, there are charter flights between Yerevan and Istanbul and initiatives have been launched to try to open an air route between Yerevan and Van, in eastern Turkey. This route that would have been opened in April 2013 unfortunately did not materialize even though the prospects continue to be explored by both sides. There are also reports that both Armenian and Turkish tourism companies, especially from eastern parts of Turkey, are very keen to see the opening of such a flight and possibly one also to Diyarbakir in southeastern Turkey. Such flights would help boost economic activity on both sides of the border.

Armenians around the world see the approaching centenary of the tragic mass killings as a focal point for concentrating pressure on Turkey to recognize the genocide. It is also likely that some Armenians will view the declaration by Erdogan as a ploy to preempt such recognition. The statement also acknowledges that the new openness regarding the historic events may be used by some to voice “accusatory, offensive and even provocative assertions and allegations” but calls upon all sides to bear these with “empathy and tolerance.” In that light, the declaration can also be seen as an opportunity to revive the arrested reconciliation process. A less ambitious but pragmatic first initiative would be to open a single border crossing between Armenia and Turkey accompanied by regular air service between Istanbul and Yerevan. The increased economic and people-to-people contacts between the nations could well become a concrete next step to unlocking the relationship from its zero-sum logic and deep sense of insecurity, and to facilitating a more comprehensive reconciliation between Armenians and Turks ahead of the centenary of the Armenian genocide.

Kemal Kirişci is the TUSIAD Senior Fellow in the Foreign Policy Program at The Brookings Institution, in Washington, DC. Andrew Moffatt is the Associate Director of the Center on the United States and Europe at Brookings.