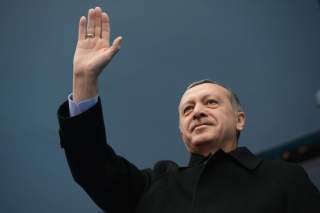 On Sunday, Turkey’s electorate voted to vastly expand the powers of President Recep Tayyip Erdogan, and many knelled the demise of Turkish democracy. They’re wrong, but only on a technicality. The relatively free Turkish system of government, with its sovereign parliament and protections for the individual, has been dead for almost a year. The effect of last weekend’s referendum was merely to cement, through popular sanction, the antiliberal tragedy that’s already unfolded.

Consider the amendments to the Turkish constitution that voters approved: abolishing the position of prime minister, allowing the president to be a member of a political party, bestowing on the presidency the authority to appoint some of the judicial branch, granting the president the power to issue decrees that are nonetheless subservient to parliamentary legislation. They might even call that latter one “executive orders”: if these reforms alone constitute a dictatorship, then the United States has been a fruited-plain North Korea for decades.

What makes Turkey different is twofold: Erdogan’s lock on the presidency and the attempted military coup there last summer. After the putsch was put down, Turkey declared a state of emergency and set about ostracizing the Gulenists, followers of the self-exiled sheikh Fethullah Gulen, whom Erdogan blames for the revolt. Purge lists were distributed and tens of thousands have since been sacked—teachers, journalists, judges, cooks—for offenses as perfunctory as owning a book written by Gulen. Media outlets have been shut down or consolidated under government control, with one report counting 85 percent of Turkish news stations as presently owned by the state, an all-time high.

So when last autumn the nationalist MHP party suddenly announced its support for the expanded presidency they’d previously opposed and gave the ruling AK Party sufficient votes in parliament to call a referendum, Erdogan was delighted. But by that point, the constitutional reforms seemed almost superfluous. He already had enormous power. His party’s mammoth majority in the National Assembly guaranteed total control. Erdogan quickly set about using his outsize authority to influence the referendum over whether he should be granted outsize authority. Opposition figures were hauled off to prison, and the media was slanted towards the “yes” side. Hence why the “no” campaign, spearheaded by the secular liberal CHP party and pro-Kurdish HDP party, is now claiming ballot irregularities and thundering about the referendum’s illegitimacy. Erdogan, meanwhile, ominously warns that “it’s too late now.”

Yet whatever tampering might be uncovered, it’s impossible not to stare at the Anatolian heartland in central Turkey. This is the seat of support for Erdogan’s AK Party, where its policies of liberalization have turbocharged the economy and its affinity for religious conservatism is shared. Ballot rigging or no, Anatolia voted overwhelmingly for Erdogan’s executive presidency, rendering the electoral map in shades familiar to any American: an expanse of “yes” throughout the interior bookended by “no” on the Aegean west coast and in the Kurdish east. How did that happen? Why would so many vote a strongman upon themselves?

In his 1941 study of Nazi Germany Escape from Freedom, Erich Fromm warned that when men in free societies feel isolated and anxious, they’re often willing to barter away some liberty in exchange for a stable sense of belonging. Erdogan is light years away from being Hitler, but Turkey lately has been roiled by anxiety: a dozen major terrorist attacks last year alone, ISIS fanaticism and Kurdish separatism, the Syrian Civil War next door, the consequent deluge of refugees and, of course, last year’s all-too-familiar coup attempt. Presented with this, many Turks, especially those who already support the AK Party, have calculated that it’s worth it to clamp down if it brings some order to this chaos. And why weep over a few shuttered newspapers when the state was almost toppled? “My heart was about to explode,” said one euphoric AK supporter after the referendum, “because our society has been swinging so much from side to side.”

Onto this tilt-a-whirl has stepped Erdogan, who pledges a stronger, if less free, Turkish polity lashed together by common religion and hearkening back to Ottoman glory. This ironically amounts to nationalism, the same force that once threatened to unspool the Ottoman Empire he now channels. So now the Turkish state will continue to undergo its most sweeping changes since Ataturk. Turkey, stung by its futile attempts to join the European Union, will pivot eastwards, towards the Muslim world as its cultural home and Russia as its governing model. George W. Bush’s freedom agenda, which saw Turkey as a model for Middle Eastern democracy and stumped for its membership in the EU, has been sealed in its coffin. And one of the world’s most heritage-rich countries will fall further under the sway of a single unworthy man. It’s a shame.