Turning To Saakashvili Will Not Help Ukraine 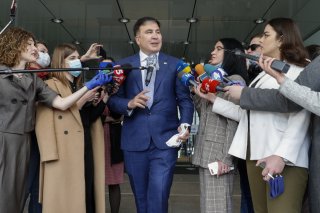 It’s crazy time in Kyiv again. President Volodymyr Zelensky is trying to appoint fifty-two-year-old Misha Saakashvili as the deputy prime minister for reform. Saakashvili, the former president of Georgia, is endlessly energetic and fun to watch, but only if disaster movies are your thing. Ukraine’s New Times magazine perhaps put it best: “It will not be boring.”

His actual ideas aren’t bad or novel—he wants to end corruption, slash regulation, and boost economic growth—but his record in Ukraine is paper thin. There’s no denying that Saakashvili is a charismatic politician who did some real good in Georgia for a time—until he didn’t. (Google prison scandal in Georgia.) But in Ukraine, a place that is far more complex and one where he remains a foreigner, he has already failed.

In 2015-2016, his former classmate President Petro Poroshenko appointed him to be the governor of the Odessa region. Saakashvili promised to clean up the city’s notorious port system, but Gennady Truhanov, the local mayor, turned out to be far stronger and Misha focused his energy far more on staging media circuses rather than systematic reforms. The cameras may follow Misha’s every move in Ukraine, and while he cuts a great image in his leather coat and talks a big game in Ukrainian, name recognition means very little when it comes to actually getting people to follow the rules.

If Misha failed as a regional governor, why would the president put him in charge of nation-wide reforms?

First, Zelensky’s numbers are slipping and he’s desperate to put points on the board. He promised to make Ukraine rich, end the war in eastern Ukraine, and end graft. So far, he’s zero for three, and he’s been in office for a year. Ukraine remains the poorest country in Europe, and the war grinds on, ignored by much of the world. Boosters will point to some progress on the war front, but beyond a November summit that accomplished nothing, three prisoner exchanges, and the pullback of troops in several places, the facts on the ground remain the same. The parliament did make some small progress last fall to curb graft, but one would need a microscope to detect the changes. Ukraine remains a hotbed of corruption.

Misha is a big, attention-grabbing name, and by attaching himself to another celebrity who is popular in the West and talks a good reform game, Zelensky may buy himself some more time to prove his reformist credentials.

Ukraine needs to sweeten up the West and convince the International Monetary Fund to approve another billion-dollar program. So far, the IMF hasn’t been willing to sign off on the deal, rightfully concerned that oligarch Ihor Kolomoisky is trying to regain control of his former bank, PrivatBank. To obtain $8 billion from the IMF, Ukraine must pass land reform and a banking law. A watered-down version of land reform passed, but Kolomoisky’s confederates have flooded the parliament with thousands of useless amendments to the banking bill. Parliamentarians have told me that the banking bill should pass in May, but like everything else in Ukraine, it won’t be easy.

Here Zelensky has miscalculated. Saakashvili has a mixed reputation in Washington and a negative reputation in Brussels and Berlin. And he may have messed up in Kyiv as well. The Saakashvili appointment is running into trouble, and the president’s party may not have enough votes to push it through.

Second, appointing Saakashvili is payback. Zelensky’s rival Petro Poroshenko detests him. Not only did Zelensky school Poroshenko a year ago in the presidential race by a three to one margin, he is bringing back his nemesis. Poroshenko had his Security Services trap Saahashvili on the roof of his apartment and then had him forcibly removed from a Georgian restaurant in Kyiv at gunpoint. He was deported on a private jet bound for Poland to prevent him from running for president. At the time, Misha was a legitimate power threat to the Poroshenko administration, which was struggling in the polls.

What does this latest twist in Ukraine’s byzantine politics mean? What it usually does. Expect major political turbulence ahead, coupled with a nasty economic downturn. As a result of the coronavirus, more than one million jobs have been lost, and the IMF expects Ukraine’s economy to contract by 7.7 percent this year.

In the end, appointing Saashashvili is bound to fail and will destabilize a weak government that only took office on March 4. His appointment instantly stokes internal tensions in the governing team. Saakashvili has a terrible relationship with the strongest minister in the cabinet, Interior Minister Arsen Avakov. In one memorable meeting, he called Avakov a thief, and Avakov threw a glass of water in Misha’s face and called him a bastard. In the short-term, cabinet meetings will not be dull. What's more, Saakashvili’s tough stance on Russia is likely to set off conflicts with chief of staff Andriy Yermak, while his penchant for hogging the media limelight is also sure to irritate Zelensky, who likes to keep the public stage to himself.

If Zelensky’s party can muster the votes, Saakashvili will be back, but how long his tenure will last is an open question.