A Twenty-First-Century Strategy to Counter Russia, China, and Iran 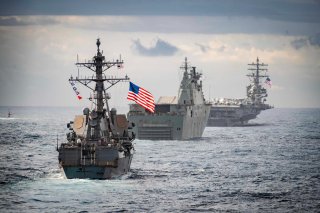 Russia’s saber-rattling around Ukraine and its demand that NATO return to its 1997 borders at least de facto if not de jure took the world by surprise. Even more surprising will be the People’s Republic of China’s final moves toward subduing, if not annexing Taiwan, which has become increasingly likely, at least according to a former commander of United States Indo-Pacific Command. These two developments mark the end of a long period of competition and conflict in world affairs. In fact, conflict between the United States, China, and Russia has been brewing for some time, despite that the United States has preferred to treat it as competition. A new approach is needed, which I call “cascading realism,” by which conflict is not avoided or wished away, but confronted in a flexible manner, relying on allies and measured yet forceful responses. This strategic response is urgent, as the world seems to be spiraling towards a situation, not unlike that preceding World War II, in which great powers aim to reshape the world order and hierarchy of power.

The not-so-thinly veiled war threats issued by Russia since the fall of 2021 have alluded to nuclear conflict. Russia’s takeover of Crimea, complemented by the gray zone conflict in Ukraine, is the product of force. Russia is in a latent conflict with the West. However, Russia’s moves should not be seen as isolated developments. They mark a major turn in world affairs in which greater and lesser powers have engaged in conflict, including China, which annexed the South China Sea. Iran, too, has been openly attacking ships transiting the Persian Gulf, including one that killed a British and a Romanian, both citizens of NATO countries. Local conflicts affecting NATO and Western interests flare up frequently even if the media pays little attention to them.

The real problem with these developments is that they have been mistakenly seen in the United States in competitive terms. In fact, they are blooming conflicts. Until now, the solution has been either to engage in full-out conflict or to play the competitive game the same way the adversary does, namely, as a conflict with non-reversible outcomes. The United States proposes the latter, although in a manner that is different than that adopted by its adversaries. Instead, the United States needs to show flexible resolve exercised through a new type of realism, in which its voice should not be diluted but propagated through its partners. America should confront aggressive takeovers and encroachment with immediate responses while providing tangible means for de-escalation that satisfy both parties and international peace. At the same time, the United States needs to reaffirm its commitment to vital national interests while working with local leaders who should act in a similar manner in their own interest. By implementing cascading engagement and pushback mechanisms, the United States will avoid carrying the burden and paying the cost of being an international guarantor of world peace while harvesting little recognition or prestige from it.

While the world’s attention has been focused on Russia and Ukraine, the real magnitude of the problem is much larger. In the name of an open competition for resources and access, China obtained in the South China Sea something that in the past would have resulted in a regional conflict: establishing military bases and exercising effective control over disputed territorial waters. Furthermore, the claims and strong points are already connected to a global network of mutually supportive strategic actions. The South China Sea outcome is the equivalent of a checkmate chess move. It was induced by cornering the queen, the U.S. Indo-Pacific Fleet in Southeast Asia. From now on, applying pressure elsewhere, such as Taiwan or North Korea, will always be more expensive, as the United States cannot use the South China Sea as a bargaining chip while simultaneously exposing its fleet to costly operations.

U.S. military planners and politicians are now left to determine what they did wrong. Worse, some are still trying to convince themselves, the world, and U.S. adversaries that their perception—“it is a mere competition, nothing was truly lost, there is still time”— is reality.

First, it is necessary to distinguish competition from conflict. Competition and conflict differ in their dynamics and outcomes. Competition is continuous while conflicts are discrete. Competitions result in reversible outcomes, which are renegotiated from time to time to accommodate the actors. Conflicts result in non-reversible outcomes, whose status is expected to be permanent. The outcome of a conflict can only be undone by another conflict. While competition is an infinitely evolving non-zero-sum game, conflict is a series of zero-sum games that succeed in discrete episodes. The relative advantage of a competitive game is that a country can maintain and extend its gains in time without significant costs. The disadvantage of competition is that the gains are of relative value, incremental, small, and possibly reversible. The comparative advantages of a conflict are that it can bring great benefits, it ensures definitive outcomes, and it puts the adversary in an inferior position. The disadvantage is that conflict has high initial and final risks. In conflict, there is no such thing as a bit of a loss. Conflict breeds conflict, spiraling out of control. The benefits of conflict rarely exceed the costs.

Given this, a situation in which competitive behavior is pushed to the limit to generate greater outcomes was preferred by U.S. adversaries. One gets the cake (irreversible outcomes) and can eat it, too (the competition continues). This kind of “competitive conflict” or “irreversible competition” has been evident in three recent contexts: the South China Sea, Crimea, and Syria-Iraq. In each of these situations, the losses for the United States were significant and the product of several major strategic miscalculations. The fundamental one was, as stated, mistaking conflict for competition due to wishful thinking. Two other mistakes bred this error: inertial strategic thinking and the lack of criteria to determine if the United States is in a competition or conflict.

The People’s Republic of China has claimed the entire South China Sea as a part of its territorial waters since 1949. For decades, this was one of the many disputed and nominal claims made by the nations of the world over territories they aspired to control while doing nothing to achieve the goal. Thus, the Chinese claim to a border, called the “nine-dash” line, stretching as far as 1,000 miles from the coast of mainland China, was taken as another instrument in the global game of verbal and diplomatic competition. Everything changed in 2016 when China refused a decision of the Permanent Court of Arbitration in The Hague which declared that Chinese claims lacked any basis in international law or historical rights. China’s refusal would have gone in the annals of diplomacy as another verbal repartee if it weren’t reinforced by more than just words. China has since established numerous naval installations in the claimed area. The Chinese coast guard and navy patrol the area as if it is part of its national territory, while Chinese air patrols are a nuisance for the naval forces of other world powers—such as those of the United States, United Kingdom, France, or India—undertaking freedom of navigation patrols of their own. As much as the world, especially the United States, disagrees with China’s claims, all is reduced to verbal protestations while China’s power projection assets are secure. China, in effect, has gotten what it wanted without firing a shot. How did the United States get to this point?

As far as the United States is concerned, its strategic leadership, especially during the Clinton, Bush, and Obama presidencies, underestimated China’s will and ability to enforce its verbal claims. The United States underestimated the scope and speed of technological capabilities while misunderstanding their true nature. Successful infrastructure and logistics operations catalyzed China’s desire and ability to create new weapons systems. This suggested from the very beginning that it was not a competition but a zero-sum conflict over the local maritime domain in the western Pacific. The South China Sea was not a mere local affair. It was connected to global ambitions, more recently to the trillion-dollar Belt and Road Initiative and the creation of a blue water navy almost as large as that of the U.S. Navy. By winning the South China Sea conflict, China won the first battle for wrestling the control of, or at least limiting access to, the world ocean.

Throughout the 1990s and 2000s, China’s claims and actions in the South China Sea were perceived as a mere competitive bid for regional leadership. Yet, the Chinese People’s Liberation Army, Air Force, and Navy’s static and mobile installations control all choke points using advanced information, sensing, and command and control networks that buttress operations and assets in the Pacific and Indian Oceans. The United States thought it could play a competitive game by running “freedom of navigation” patrols. The truth was and is that unless these operations effectively deny the normal operations of the Chinese information and command and control networks, they remain merely tolerated activities, all bark with no teeth.