Twenty-Five Years After the Rwandan Genocide 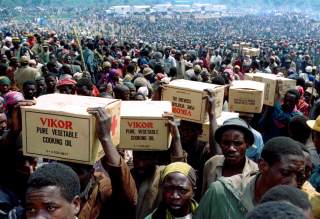 Twenty-five years ago, Rwanda was enveloped by one of the most devastating mass slaughters in human history. At least eight hundred thousand ethnic Tutsis—more than two thirds of the Tutsi population of Rwanda—were massacred in the space of just three months at the hands of government forces, Hutu militias, and ordinary people blinded by hate. The genocide wrought incalculable change upon Rwanda, forever altering the country’s societal, political, and cultural fabrics.

The horrific events of May–July 1994 helped to catalyze changes to world politics, too. But the international impacts of the Rwandan genocide have proven to be far less transformative than those inflicted upon domestic society. Whereas it once seemed possible that the “liberal” international order was moving in the direction of institutionalizing rules and processes to prevent mass atrocities and punish their perpetrators, such a project now looks hopelessly anachronistic and, indeed, naïve.

In the months and years that followed the Rwandan genocide, international actors typically volunteered two responses to the killings: shame that nothing had been done to stop the slaughter, and frustration with the prevailing system of international law and organization, which seemed to offer few tools for preventing mass atrocities or halting them in their tracks.

President Bill Clinton summed up these sentiments on a visit to Kigali in 1998. “We did not act quickly enough after the killing began,” he acknowledged. “We should not have allowed the refugee camps to become safe havens for the killers. We did not immediately call these crimes by their rightful name: genocide.”

Leaders like Clinton urged that new processes be adopted so that monstrous crimes like the Rwandan genocide could never happen again. In his words: “We owe to all the people in the world our best efforts to organize ourselves so that we can maximize the chances of preventing these events. And where they cannot be prevented, we can move more quickly to minimize the horror.”

In time, this injunction that the international community must “organize itself” differently led to several concrete developments.

First, there was the creation of the International Criminal Court (ICC), the world’s first permanent international tribunal for holding individuals accountable for the perpetration of war crimes and other crimes against humanity. The Rome Statute to create the ICC opened for signature in July 1998—almost exactly four years after the end of the genocide against Rwanda’s Tutsis—and finally entered into force in 2002. Over half the world’s states are now subject to the court’s jurisdiction.

Second, there was the development of political and legal doctrines to justify the use of military force in defense of human life and dignity. Since the adoption of the UN Charter in 1945, international law has permitted the use of force in only two instances: for purposes of national self-defense and when authorized by the UN Security Council. In the 1990s and 2000s, proponents of so-called “humanitarian interventions” proposed to add a third justification: the urgent prevention of mass atrocities.

Perhaps the most famous attempt to incorporate the doctrine of humanitarian intervention into international law came from British prime minister Tony Blair. His April 1999 speech to the Chicago Council on Global Affairs took place against the backdrop of a NATO bombing campaign against the government of Serbia, which was then carrying out a policy of ethnic cleansing against Albanian Kosovars.

Blair was a vocal proponent of deploying ground forces to Kosovo as a means of preventing further atrocities from taking place. But how could such a military intervention be squared with the UN Charter’s clear prohibition of the use of force? The prime minister argued that humanitarian interventions were justifiable under certain conditions, some of which echoed the more familiar tenets of Just War Theory. But crucially, he coupled his arguments for military interventions with an acknowledgement that any new bout of rulemaking at the international level would have to take place through established channels—namely, the United Nations. “If we want a world ruled by law and by international co-operation then we have to support the UN as its central pillar,” he declared.

Blair seemed to believe that the virtue of humanitarian interventions was self-evident and that, in due course, the demonstrable benefits of military interventions would persuade enough other countries of the necessity to amend international law and institutions. Given the manifest inadequacy of the current system, how could it be otherwise?

Indeed, Blair’s confidence in the ineluctability of legalized humanitarian intervention did not appear misplaced—at least not immediately. After months of airstrikes, NATO ground forces did, indeed, enter Kosovo unopposed in July 1999 to begin peacekeeping operations. And in September, the UN Security Council authorized a multilateral (Australian-led) military intervention in East Timor. The following year, British forces carried out a humanitarian intervention in Sierra Leone credited with saving thousands of civilian lives.

Meanwhile, moves to codify the international community’s right of humanitarian intervention proceeded apace. After years of wrangling, the so-called Responsibility to Protect (R2P) doctrine was adopted unanimously by world leaders in 2005, spelling out in binding international law the process by which external actors could intervene in the affairs of other states to prevent mass atrocities from taking place.

All of these international endeavors—the establishment of the ICC, the carrying out of humanitarian interventions, and the codification of the R2P doctrine—were geared towards creating a safer, better, and more humane world; an international system purpose-built to deter repressive regimes from committing mass atrocities, authorize right-minded governments to protect vulnerable populations, and empower international institutions like the ICC to bring the perpetrators of war crimes to justice.

What is more, such a world actually seemed possible—tantalizingly close to realization, even—during the late 1990s and early 2000s. Liberal internationalism was not just winning in the war of ideas—it appeared to be working in practice, as well.

Yet of course, mass atrocities have not become a thing of the past. Nor has the international community made a consistent habit of punishing war crimes and other mass atrocities. While there has been no genocide comparable to the Rwandan experience during recent decades, one need look no further than contemporary Myanmar, Syria, Yemen, or China to discover that crimes against humanity—ethnic cleansing, chemical weapons attacks, unspeakable war crimes, and mass detentions—continue to be perpetrated with relative impunity.

One reason is that universal support was never forthcoming for humanitarian interventions and the associated principle of individual accountability for gross violations of human rights. This is not to say that support of universal notions of human rights is a Western preserve. There are people all across the world—from every region, religion, and walk of life—who support humanitarian principles. But not all of these humanitarians have been able to win over their political leaders.

On the contrary, some governments—leaders in Moscow and Beijing, for example—openly privilege those international rules that are most at odds with the notions of humanitarian intervention and individual accountability. They view Western calls for military operations with suspicion and point to cases where purported humanitarian interventions have led to the redrawing of international boundaries (Kosovo’s declaration of independence from Serbia) or outright regime change (the 2011 ouster of Libya’s Muammar el-Qaddafi).

The result is that global support for the principle of humanitarian intervention has, perhaps, capped out. So, too, has enthusiasm for the ICC. Both the Philippines and Burundi have withdrawn from the Rome Statute in recent years. A host of (mostly African) nations have threatened to follow suit. And, of course, the most powerful countries in the world—the United States, China, Russia, India—never subscribed to the court in the first place.

Not even the erstwhile stalwarts of the interventionist “movement” have kept the faith. In the West, the turnaround has been most pronounced on the left wing of politics, with leaders like Bill Clinton and Tony Blair being replaced by the likes of Bernie Sanders, Jeremy Corbyn, and others more apt to see Western military power as a cause of global suffering than a solution to it. But opposition to a universal human-rights architecture exists among right-wing politicians, too. As John Bolton recently put it: “The International Criminal Court unacceptably threatens American sovereignty and U.S. national security interests.”

For both these sets of reasons—insufficient international appetite and declining support among Western nations—the brutal reality is that, twenty-five years after the Rwandan genocide, sovereignty remains an effective shield behind which too many states can get away with committing mass atrocities and otherwise abusing their populations. If the liberal international order can be described as “liberal” in any meaningful sense, then it is not because it elevates the concern for individual life and dignity above the prerogatives of states.

The situation is not hopeless, of course. The arc of the moral universe might yet bend toward justice. Across the world, committed activists work tirelessly to raise awareness of gross violations of human rights. If placed under enough pressure, then the international community could still, at some point, reorganize itself in a way that was hardwired against heinous crimes such as the Rwandan genocide.

But such a reorganization cannot come from the West. That window has closed, if it was ever open. In the twenty-first century, the triumph of humanitarianism over traditional international orthodoxies can only be delivered through a truly global movement capable of winning over decisionmakers—not just in the West but in the rest of the world, too. Might the sickening memory of Rwanda yet inspire a better and more hospitable world order? It would be wrong to lose hope.