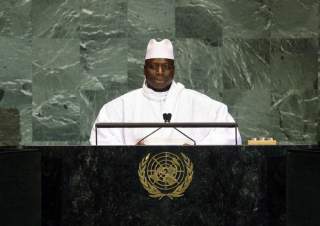 Hours before dawn on December 30, 2014, gunfire erupted near the presidential palace in Banjul, the capital of The Gambia. For 20 years, the tiny West African country had been ruled by His Excellency Sheikh Professor Alhaji Dr. Yahya Abdul-Azziz Jemus Junkung Jammeh , a portly strongman who came to power in a bloodless military coup. Now, a small group of conspirators—mostly former soldiers—were poised to launch a coup of their own.

Their original plan was to ambush the presidential motorcade. But the plotters learned that Jammeh was abroad (perhaps in Paris, but possibly in Dubai—no official explanation was given). The would-be putschists quickly hatched a new plan: fire their weapons at the State House, wait for the palace guard to surrender or flee, then walk in and take the reins of power.

Things quickly went awry for the conspirators. Rather than surrender or flee, the security forces returned fire, killing one of the plot leaders, retired Lieutenant Colonel Lamin Sanneh—a former State Guards commander and U.S. National Defense University graduate who also attended the Royal Military Academy at Sandhurst. Four of the coup plotters escaped to neighboring Guinea-Bissau while two others made it across the border into Senegal, where they sought refuge in the U.S. embassy. These latter two men, Cherno Njie and Papa Faal, were American citizens of Gambian dissent. Both had an unwelcome surprise waiting for them when they returned to the United States a few days later—federal agents had warrants for their arrest.

According to the criminal complaint filed in a Minnesota federal court, Njie and Faal conspired to violate the Neutrality Act of 1794, which outlaws “any [private] military or naval expedition or enterprise” directed against “the territory or dominion of any foreign prince or state . . .with whom the United States is at peace.” In 1981, prosecutors used the law against a band of Louisiana-based white supremacists planning to overthrow the Caribbean island nation of Dominica—the so-called Bayou of Pigs case. In 2007, the government accused an exiled Hmong leader of plotting to overthrow the communist regime in Laos (the Justice Department dropped the charges in 2009).

The conspiracy Njie and Faal stand accused of seems straight out of the pages of a Frederick Forsyth thriller. (Another murky coup plot in a different African country—the improbable “Wonga Coup” of 2004, which was aimed at overthrowing Equitorial Guinea’s tyrannical regime—was inspired by Forsyth’s classic, The Dogs of War.)

According to the criminal complaint, 57-year-old Njie, a respected Austin, Texas real-estate developer and life-long Republican (code name “Dave”) allegedly bankrolled the operation and aspired to serve as the post-coup “interim leader” of The Gambia. Faal, a 46-year-old U.S. Army veteran (code name “Fox”), was recruited into the conspiracy by Njie, according to the FBI. The two men, according to press reports, were motivated by a burning passion to remove Jammeh from power and restore The Gambia to democracy. In the words of one Gambian activist, Njie and Faal were driven to act by “the tyranny and barbarism that we have endured for these past 20 years . . . Everybody has a breaking point.”

Before Jammeh, The Gambia had enjoyed nearly three decades of post-independence democracy. The country was Britain’s first and last West African colony—a remote imperial outpost whose colonial origins can be traced to 1618, when British slave traders built a fort at the mouth of the Gambia River. Roughly the size of New Jersey, and a population just under two million, The Gambia is a sliver of land thrust into Senegal, with 50 miles of attractive Atlantic oceanfront. Writing in 1944, a former governor of the British colony was neither the first nor the last observer to comment on “the absurdity of its geographical boundaries”—a “Gambian hot dog in the Senegalese roll,” as one American reporter put it somewhat crudely in the 1960s.

The Gambia dozed in relative tranquility until 1994, when a group of Gambian military officers led by Yayah Jammeh seized power. Although elected and re-elected four times since 1996, Jammeh is hardly a model democratic leader. A 2013 State Department human rights report highlighted major abuses in The Gambia, including “government harassment and abuse of its critics; and torture, arrest, detention, and sometimes enforced disappearance of citizens.”

Jammeh’s rule has been simultaneously brutal, bizarre, and baroque. In the view of one foreign diplomat, Jammeh is “quite possibly the only head of state  . . .  Who is clinically insane.” Among Jammeh’s milder eccentricities is his belief in herbal cures for HIV/AIDS and other serious illnesses. In 2009, the Gambian ruler—a modern-day witch hunter—had more than 1,000 purported “sorcerers” rounded up at gunpoint in 2009 and “exorcised” with force-fed hallucinogenic herbal concoctions.

More sinister still is his ferocious hatred of homosexuals. To be sure, other countries on the continent, like Uganda, have criminalized homosexual activity and persecuted gays and lesbians. But Jammeh’s loathing for the LGBT community appears boundless. In a tirade before the Gambian parliament, he insisted that he has “never seen [a] homosexual chicken, or turkey” and observed his “buffalos from South Africa and Brazil . . . never date each other.”

In Jammeh’s September 2013 appearance before the UN General Assembly, he denounced homosexuals as “very evil, anti-human.” In other rodomontades, the ruler ordered gay men and lesbians to leave the country or face beheading, and has vowed to “fight these vermins called homosexuals or gays the same way we are fighting malaria-causing mosquitoes.” Last October, Jammeh severely increased the legal sanctions on already illegal homosexual acts—including the possibility of life imprisonment in the case of “aggravated homosexuality.”

Given his outré and inhumane views, bizarre utterances, and despotic rule, it is hardly surprising that Jammeh has earned the animosity of the Gambian diaspora, human rights activists, and Western governments. Jammeh has looted millions of dollars from one of the poorest countries in the world, whose tiny economy is dominated by European tourism, peanut exports, and international largesse. In standard dictator fashion, Jammeh has moved assets offshore—in his case, to Potomac, Maryland, a tony Washington suburb where he reportedly owns a multi-million dollar 8,000 square foot mansion.

As recently as last summer, Jammeh appeared to be a member of the international community in good standing. Unlike Robert Mugabe, his tyrannical colleague in Zimbabwe, and Sudan’s Omar al-Bashir, Jammeh was invited to the Obama administration’s U.S. Africa Leaders summit in Washington in August 2014. Passersby got a glimpse of what Gambians experience at home every day when Jammeh's henchmen assaulted human-rights protesters outside his hotel, the five-star Hay-Adams.

But The Gambia’s new anti-gay legislation was the breaking point for the White House. As is the case for much of America’s foreign assistance, it is difficult to determine precisely how much aid the Jammeh regime receives, although the limited information available suggests the amount is miniscule. Training support to the Gambian army and navy in fiscal year 2013 amounted to $257,293. The U.S. government’s leverage over Jammeh is therefore limited. Nonetheless, on Christmas Eve, the administration signaled its displeasure by dropping The Gambia from the African Growth and Opportunity Act, a trade preference program.

Roughly a week later, Jammeh fulminated against the United States and the UK, claiming that the events of December 30th were not a coup, but rather an act of terrorism carried out by shadowy neo-colonial forces. As with previous coup attempts—the most recent occurred in October 2013—the United States declared that it played no role. Indeed, the Justice Department moved swiftly against the two alleged U.S. conspirators.

In the New Year, Jammeh has acted in time-tested post-coup fashion. The National Intelligence Agency, the regime’s feared internal-security organ, is on the hunt for disloyal elements and has rounded up dozens of civilians and military personnel. The December 2014 coup attempt—amateurish in its planning and execution—was probably destined to fail. Next time, however, Jammeh might not be so lucky.

William Rosenau is a senior research scientist in the Center for Strategic Studies, CNA Corporation, a nonprofit research organization in Arlington, Virginia.