Two Percent Defense Spending for NATO Is a Flawed Idea 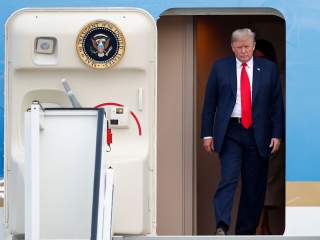 When I was serving on active duty as a U.S. Naval flight officer in the 1960's, I once asked an admiral, who had come to speak to our squadron, how the country decided how much to spend on defense each year. The admiral told me that the Pentagon received a certain percentage of the Gross Domestic Product (GDP). But, when I asked what the Department of Defense (DOD) would do if the GDP went down, but the threat did not, he replied that he did not believe that the GDP could ever go down.

I was reminded of this conversation during the recent North Atlantic Treaty Organization (NATO) summit when the twenty-nine member nations all agreed to support the goal of increasing their defense budgets to 2 percent of the GDP by no later than 2024. While President Trump claimed credit for getting the members of the alliance to support this goal, the fact of the matter is that NATO actually adopted this goal in 2014. That was during the Obama administration when Russia invaded Ukraine and annexed Crimea, and since that time America’s NATO allies have increased their defense spending by $87 billion.

Trump argues that NATO needs to do this not only to combat the increasing threat from Russia but also to reduce the portion of NATO’s defense for which the United States pays.

First, suppose that the western world experienced another recession, like the one that gripped it in 2008 and 2009, that negatively impacts the economic growth of alliance members. Does this mean that the nation should stop increasing their defense budgets even if Russia continues its aggressive behavior? Conversely, if the western economies experience a period of rapid economic growth should they continue to increase defense spending above necessary levels? For example, because the U.S. economy is projected to increase more rapidly than U.S. defense spending, the Pentagon’s share of the GDP is projected to drop from 3.2 percent today to 2.8 percent by 2024. But this does not mean America should increase its defense budget, which is already at record highs.

Second, increasing defense spending does not necessarily increase capabilities. It is not just how much a nation spends on defense, but on what it spends the money. For example, in the 1990s the U.S. Army spent several billion dollars on its Future Combat System that came to naught. Similarly, in that same decade, the Navy spent billions on the A-12 aircraft, which was supposed to be its version of the Air Force's F-22, before then-Secretary of Defense Dick Cheney canceled it.

Third, spending on the military or the defense department is not the only way a nation can enhance its security or that of its allies. Enhancing security also involves sufficient spending on things like homeland security and institutions that support fragile democracies.

Moreover, claiming that America is paying more than its fair share by comparing the size of the U.S. defense budget to that of the other alliance members is also misleading. In FY2017, total spending by all alliance members amounted to about $900 billion—two-thirds of which was spent by the United States. But America is not just a European power but a world power that spends a great deal of its funds supporting its forces around the globe. In addition, unlike some NATO members, the United States has a volunteer military. Therefore, it must spend a significant share of its budget on personnel costs to recruit and retain sufficiently qualified personnel. For FY2019, the upcoming fiscal year, America will spend more than $200 billion of its base budget on its personnel and more than $500 billion on total military compensation related funding.

Nor does the United States account for two-thirds of NATO’s military budget. According to the Institute for International Studies, America actually spends 22 percent of NATO’s common defense budget and about $36 billion, or 5 percent, of its total budget on defending Europe. And while America currently has about 60,000 troops in Europe, other NATO members have 1.8 million.

It is also important to note that, even though only eight of NATO’s twenty-nine members have met the 2 percent goal, the Europeans are already spending significantly more than Russia. For instance, last year, non-U.S. NATO members spent nearly $300 billion while Russia spent only about $66 billion. Furthermore, the top four European spenders—France, Germany, the United Kingdom, and Italy—spent more than two-and-a-half times what Russia did.

Finally, focusing only on how much a nation spends can ignore a member’s real contributions to the common defense. For example, Denmark, which spends only 1.3 percent of its GDP on defense and will not meet the 2 percent goal by 2024, is one of only a few members to have conscription and has sent forces to the Balkans, Iraq, and Afghanistan. In fact, on a per capita basis, the Danes suffered significant casualties in the Balkans, Iraq, and Afghanistan.

What NATO needs is for all twenty-nine members to contribute to a common strategy to deter or defeat Russia if the Kremlin should accidentally or deliberately provoke a war. This is why NATO needs to make it clear that an attack on any member is an attack on all. To do this, NATO has committed to a proposal by Secretary of Defense Mattis to be able to deploy thirty mechanized battalions, thirty air squadrons, thirty combat vessels within thirty days.

They should do this as rapidly as possible without regard to the ups and downs of their domestic economies and be prepared to use it.