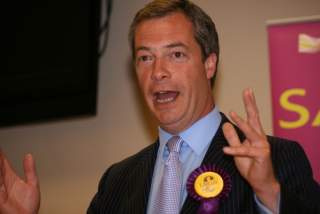 NIGEL PAUL FARAGE was a member of the Conservative Party when Margaret Thatcher was its leader. Today, he still looks and sounds a lot like an old-fashioned British Conservative. He wears pin-striped suits during the working week and bright red or yellow trousers on weekends—as many upper-class fashion criminals inexplicably do. He was educated at Dulwich College, a fee-paying private school where he enjoyed cricket and rugby and joined the army cadets.

The son of a stockbroker named Guy Oscar Justus Farage, Nigel (incidentally, a very Tory name) skipped university and went directly into the City of London, where he made his mark as a commodities trader. Since 1999, he has been a member of the European Parliament. He is married to a German, Kirsten Mehr, whom he employs as his secretary, quite legally, with taxpayers’ money. And he is the leader of Britain’s fastest-growing political party, the United Kingdom Independence Party (UKIP). His larger-than-life, straight-talking personality is central to UKIP’s success, but, perversely, he is succeeding by attacking nearly everything he once embodied.

He laments Thatcherism’s impact on Britain’s working classes, for example. He criticizes the Tories and the nation’s main newspapers for being dominated by privately educated “toffs.” He grumbles that Britain is led by career politicians, even though he is now a fourth-term member of the European Parliament. He complains about how British industry employs so many foreigners, even though he employs one—his wife—as his personal aide. His party succeeds by pitting itself against London—the city where Nigel Farage made his money and where he was educated. And London is where the explanation of Britain’s complicated UKIP phenomenon must begin.

LONDON IS the British economy’s greatest success story. It is currently living through its second great age. It dominates the United Kingdom in a way that no American city comes close to doing in the United States. It is not just Britain’s political capital like Washington. Or its financial capital like New York. Or its cultural capital like Los Angeles. It is all of these things and more.

Roughly ten million people live in the Greater London Urban Area. People commute from all over Britain and from many parts of Europe to what is now the world’s third most productive city. Some dub London the sixth-biggest city in France due to the number of French expatriates living in Britain’s capital, many of who are fleeing François Hollande’s confiscatory taxes. London accounts for less than one-sixth of Britain’s population, but it contributes a quarter of its tax revenues. The properties found in Elmbridge—a London suburb home to 130,000 people—are worth an estimated £31 billion. That’s more than the value of all of the houses in Greater Glasgow—home to over one million Scots.

The strength of London’s economy is all the more remarkable because just seven years ago it was hit by the financial equivalent of a tsunami. London’s banks were at the center of the global crash. Today, the financial companies headquartered in the Square Mile and in the Docklands are powering the city’s resurgence, contributing to a $71 billion surplus in financial services for the whole UK economy. London is an outstanding example of a wider global trend where great cities such as Istanbul, Shanghai and Mumbai enjoy supercharged growth as they act as magnets for talented, inventive people—from their own countries and from abroad.

But guess what? London is the one part of Britain that UKIP cannot reach. In the May elections to the European Parliament, UKIP topped the poll. It beat Labour, Her Majesty’s official party of opposition, into second place and the ruling Conservatives into third. UKIP did very well in most parts of England, winning 35 percent of electors in the East, for example, and 32 percent in the South West. But in London it could only muster 17 percent of the vote.

Asked to explain why UKIP had done so well across most of the country but relatively poorly in the nation’s capital, Suzanne Evans, one of the party’s principal spokespeople, may have revealed more than she intended. Londoners, she explained, are more “educated, cultured and young” than the rest of Britain. Twitter and social media seized on her candor and quickly presented the average UKIP supporter as stupid, backwards and, well, a little past it. Nigel Farage will not have minded. He feeds on the metropolitan establishment’s contempt for his party. He deploys the victimhood tactics long used by the Left. Where the Left augmented its support by championing victims of sexism, racism and homophobia, Farage builds his base by suggesting that native, patriotic Britons are victims of an establishment that has surrendered the nation to immigrants, rule by Brussels and self-serving political elites.

Although the British media sometimes present UKIP as the party that hates London—its immigration, cultural diversity and youth—it would be more accurate to say that UKIP is the antiglobalization party and London encapsulates the open, free-trading nature of the twenty-first-century economy. Farage is the champion of those people and communities who feel ill served by globalization. People who don’t like immigration. Who don’t like “wars for oil,” as the argument goes, or other overseas interventions. And, just as importantly, people who feel that their traditional views on family life and national identity are under attack from the liberal values that politicians like David Cameron, Bill Clinton, Barack Obama and Tony Blair all seem to share. Many traditionalist Tories were shocked, for example, when Cameron, the Conservative leader, introduced legislation that ultimately succeeded in legalizing same-sex marriage. While UKIP is definitely an economic phenomenon, it also has important cultural ingredients.

IN DIFFERENT times, a political gap may not have existed for Britain’s equivalent of the Tea Party to emerge, but a constellation of political events has come together to give UKIP its great opportunity. The Conservative Party has been led by David Cameron, a man who does not know the price of milk, to quote one of his own rather disloyal MPs. While the charge may be unfair to Cameron, Britain’s prime minister since 2010, there can be no doubting that he has struggled to connect with poorer Britons. Meanwhile, Labour’s leader, Ed Miliband, also has difficulty reaching the victims of globalization.

This is, perhaps, more surprising, as the working classes have historically been his party’s backbone. But Miliband struggles to close the growing gap between the green, socially liberal elites that lead left-wing parties across the world and the more patriotic, socially conservative voters that politicians such as Ronald Reagan, Margaret Thatcher and Australia’s John Howard successfully cultivated. And providing the third ingredient of UKIP’s happy constellation is Britain’s third party, the Liberal Democrats. The Lib Dems traditionally have been the nation’s party of protest, but under Deputy Prime Minister Nick Clegg’s leadership they entered into a coalition government with David Cameron. They can no longer be the party of protest. Even more than the Tories, they are the object of protest.

UKIP, which received just 3 percent of the vote in Britain’s last general election, now picks up anything between 10 and 20 percent in wildly fluctuating opinion polls. In the most recent European Parliament elections, which use proportional representation, it won 28 percent. At the next UK general election, fought under the first-past-the-post system, most experts think it will struggle to win many—if any—seats, but that does not mean it won’t influence the result. Although it is siphoning off votes from all parties, it is winning the lion’s share of its support from the Conservative Party. It is also winning Labour voters whom the Tories need to win a majority and who might have been attracted to a Conservative leader who was more earthy than Cameron. For the first time since the Second World War, the Right in British politics is divided. A strong UKIP result could put Labour and Ed Miliband into 10 Downing Street.

If Labour is elected, Britain will not get the referendum on membership in the European Union that David Cameron has promised for 2017 if he is reelected. A strong UKIP performance, dividing the Right, might therefore delay or even prevent the goal for which Nigel Farage’s party was first formed: An independent Britain. Sovereign. Free. And outside the European Union. Let us travel back to 1993, the year in which UKIP was founded.

UKIP EMERGED emerged at a time when Euroskepticism was beginning to march in British politics. Margaret Thatcher had been ousted as Tory leader and prime minister just three years earlier. She had won three general elections for her party and is still widely regarded as one of the country’s greatest leaders. But she had become unpopular with many big beasts inside her own party because of her growing antipathy toward the European project.

Once an enthusiast for Britain’s membership in what was originally called the European Economic Community, Thatcher had turned against what she had come to see as an emerging superstate. She had wanted to be part of a free-trade area with other European nations. That was what the British people had signed up for when they had been asked to vote to either ratify or reject membership in a 1975 referendum. But Europe had become something very different by the end of the 1980s. It had a parliament, a court and a bureaucracy in Brussels that was always greedy for new powers. Although there was a common market across Europe, it was not a particularly free market. Brussels had become a super-regulator, wrapping industry after industry in red tape. That red tape suited big businesses with big compliance departments, but it was damaging to small, upstart businesses. Thatcher was particularly suspicious of the single-currency project—and rightly so. If some of Europe’s utopian politicians had heeded her warnings, the euro zone’s southern nations might not be enduring youth unemployment rates of 50 percent today.