Ukraine’s Future Is Being Made Outside Kyiv 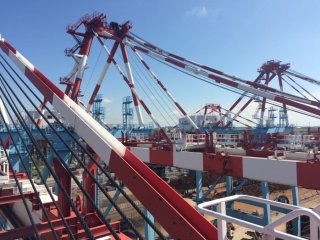 They could not be more different but both young businessmen are making waves in Ukraine. Andriy Stavnitser’s easy laugh precedes him as he walks into a room and instantly charms his guest in English, Russian or German, while Yuriy Fylyuk smiles shyly as he oversees one of the most ambitious business projects in the country.

“These young entrepreneurs inspire a new generation of Ukrainian pioneers and business leaders by demonstrating tangible successful examples in building up and running prosperous businesses all over Ukraine, in diverse sectors. This is the future for business in Ukraine breaking free from a cancerous oligarch-controlled, corrupt business environment,” Andy Hunder, president of the American Chamber of Commerce, said. Thirty-nine-year-old Stavnitser is the CEO and co-owner of TiS in Yuzhny, Ukraine, the largest privately held port outside of Odesa. TiS employs more than 5,000 people and recently opened a joint venture grain facility with Cargill, with the support of the EBRD and the International Finance Corporation, that can process 5 million tons of grain per year.

The large TiS facility sits on an estuary west of Yuzhny and contains six different operations. The first thing you notice is the corybantic activity everywhere. Railcars unload coal, gigantic candy-cane striped cranes deposit ore into international barges, and crane operators maneuver brightly colored cargo containers seamlessly. Sergiy, my guide at the TiS facility, asks if I’m afraid of heights before tucking me into a tiny elevator that shakes the whole way up into the blue yonder.

Up and down, up and down we climb narrow white staircases and move out to the water. We finally reach the end of the 64-meter crane and I can barely stand upright to smile for the camera. The impressive view doesn’t surprise me but something else does: across the estuary is a rival port, one partially owned by Ukrainian oligarch Ihor Kolomoisky and by Rinat Akhmetov. Stavnitser is doing business in one of the toughest parts of Ukraine, and by all accounts, he does it honestly and with integrity.

“If you’re looking for an honest businessman who hates the oligarchs and pays his taxes, look no further than Yuzhny,” Denis Gursky, the CEO of SocialBoost told me several years ago. Others agreed that Stavnitser and his operation deserve a special look, so I recently visited the facility. A member of the American Chamber of Commerce of Ukraine and a regular star in Ukraine Forbes, the red-headed owner of TiS has a reputation for dreaming up big plans that few others would dare consider. Take the grain terminal. Stavnitser and his team convinced Cargill, then the European Bank for Reconstruction and Development, and the International Finance Corporation to back it. TiS built the enormous facility in less than two years – not an easy task in a country where construction projects are notoriously slow and riven with opportunities for graft.

Stavnitser isn’t just a businessman. He’s also a patron of the arts scene in Odesa, and a board member and financial backer of Aspen Kyiv. He gives generously to his causes and to his friends. 830 kilometers away, Yuriy Fylyuk is transforming the city of Ivano-Frankivsk (population 237,000) with his old Soviet factory that has attracted $8.2 million in private investment with more than 800 investors. According to Forbes Ukraine, Ivano-Frankivsk is the best city in which to do business. It wasn’t always this way. In 2012, it ranked 28. Now it tops the charts. Fylyuk bought an old Soviet factory that made parts for gas meters and is transforming it into an enormous complex with businesses and social entrepreneurs. “We aren’t a traditional shopping mall,” Fylyuk says with a smile.


Fylyuk and his team recently opened “Parasolka Maker Space,” 250 square meters in an adjoining building for 40 artisans to weld, sew, brew beer, and build eco-batteries. Vsevolod Griniyov, the head brewer at Molfor Brewery, insists that I try one of his four brews. The small brewery is immaculately clean but bare bones. Molfor’s coconut stout goes down smoothly and the coconut is subtle. Impressed, I drink the whole glass and Griniyov instructs me to smell the wheat beer – perfection in a glass – that isn’t yet ready. I promise to return soon.

Fylyuk then shows me the next stage of the project. He will take another rundown part of the factory and transform it into a research and development facility. He currently uses the space to host local avant-garde theater productions, which have included a modern take of Romeo and Juliette. It also serves an industrial nightclub and hosts local bands. Fylyuk himself is not an artist but artists race up and down the stairs at the complex, and more and more talented young people move to join the project.

“This is more than work. We know we are developing our city. Now I found a reason to come back home,” said Renata Nalysnyk, a thirty-year-old native of Ivano-Frankivsk, who left her well-paying job in Kyiv to return home. The big picture in Ukraine, viewed solely from Kyiv, often looks downright hopeless but seen from outside the metropolis, there’s good reason to be optimistic about its future.