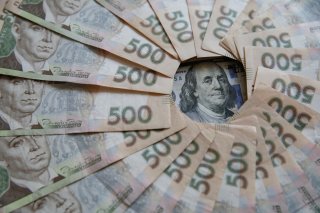 In Ukraine, libertarian think tanks and politicians are already making plans for the period after the war. The future of Ukraine was one of the major topics at the Europe Liberty Forum 2022 on May 12 and 13, organized by the Atlas Network, the leading global association of libertarian think tanks. The event was originally due to take place in Kyiv but was moved to Warsaw because of the war.

One of the guest speakers was Maryan Zablotskyy, a Member of the Ukrainian Parliament and of Ukrainian president Volodymyr Zelenskyy’s ruling party. Zablotskyy also used to be a member of the Ukraine Economic Freedom Foundation, a libertarian think tank founded in 2015. Income tax in Ukraine, Zablotskyy said, was recently lowered to 2 percent, and numerous regulations and tariffs have been abolished. “We are currently the most economically free country in the world,” he tells me.

It is beyond extraordinary for a country to cut taxes and abolish regulations while it is at war. Normally, in wartime, governments massively increase taxes and expand their reach. In 1942, the U.S. government passed the Victory Act, causing the top tax rate to skyrocket to 88 percent, a level that rose further to 94 percent in 1944 as a result of various surtaxes. In Britain, the top tax rate rose as high as 98 percent in the 1940s, and in Germany it climbed to 64.99 percent in 1941. “We believe that we are stronger when we are economically freer,” Zablotskyy said. The most important goal, he revealed, is to ensure that the economic reforms, which were adopted as temporary measures, remain in place after the war.

“After the war” is a phrase that echoes repeatedly throughout the forum. No one from Ukraine discussed how the war might end, instead, they focused solely on the opportunities that will arise after victory. Nataliya Melnyk, representative of the Bendukidze Free Market Center in Kyiv, said it would be wrong to aspire to “rebuild Ukraine.” As she explained, “We cannot aim to return to the conditions of the pre-war period, we need to create something new.” She speaks of a “window of opportunity” and refers to the findings of the Heritage Foundation’s “Index of Economic Freedom,” which ranks Ukraine as the most economically unfree of forty-five countries in the European region. In the global ranking, Ukraine comes 127th, trailing countries such as India and Nicaragua. The Heritage Foundation identifies Ukraine’s property rights, rule of law and labor market regulations as the greatest deficits.

Roman Waschuk, Canada’s ambassador to Kyiv from 2014 to 2019 and now Business Omdudsman for Ukraine, takes a more nuanced view: Ukraine is not as economically unfree as the Heritage Foundation’s Index and other statistics would have us believe. “Such rankings only evaluate official statistics, which fail to capture Ukraine’s enormous shadow economy.” Many people in the West, he says, have been surprised by the fact that Ukraine’s army is in a far better state than they assumed. And the same, Waschuk says, is true of the country’s economy.

Especially in the IT sector, which according to Nataliya Melnyk comprises at least 250,000 technology specialists, companies make extensive use of tax loopholes. The top rate of tax in Ukraine used to be 20 percent, but there is a regulation that allows “individual entrepreneurs” to pay just 5 percent. Actually, Waschuk says, this tax was originally designed for small-scale sole traders, but it has also been used by entrepreneurs, including IT specialists.

Everyone agrees that there is an urgent need for reform, especially as so many of the regulations in force in Ukraine date back to the Soviet era of the 1970s. Tom Palmer, executive vice president for International Programs of the Atlas Network, suggested that Germany’s postwar minister of economics, Ludwig Erhard, who introduced the market economy after World War II, could serve as a model for the future of Ukraine. There are also frequent calls for a Marshall Plan for Ukraine. Palmer believes that it is not a Marshall Plan that will help Ukraine, but only market-economy reforms similar to those introduced by Erhard.

Palmer is undoubtedly right. The economic course charted by Erhard’s free-market policies clearly contributed more to the Federal Republic of Germany’s subsequent “economic miracle” than the “Marshall Plan,” named after the then American secretary of state George C. Marshall, which provided aid to relieve the suffering and hunger of populations across Europe after the war. The program had a volume of $13.1 billion. Despite the British receiving more than twice as much from the plan as the Germans, Great Britain did not develop anywhere near as well as Germany. While the British were governed by socialists, Erhard introduced the market economy in Germany—having already devised his policies during the war.

Libertarian think tanks in Ukraine have closer links to the country’s politicians than similar think tanks in most other Western countries. Alexander Danilyuk, co-founder of the Free Market Centre, was Ukraine’s finance minister from 2016 to 2018, and Zablotskyy, a member of parliament, believes that a majority of Ukraine’s parliamentarians subscribe to libertarian principles. However, the libertarian Atlas Network also helps Ukraine in a very practical way. Atlas has raised 2.3 million dollars to date in support of Ukraine. Germans and Americans who belong to the network not only contribute money, but also supply medicines, night vision equipment, drones, and body armor to Ukraine. An article in The Spokesman-Review appeared under the headline: “In Ukraine, an informal web of Libertarians becomes a resistance network.”

The libertarian program for Ukraine is clear. “When we talk about the ‘new Ukraine,’ we mean three things above all,” says Nataliya Melnyk: “fighting corruption, rule of law, and economic freedom.” Maybe it sounds a bit dramatic, she says, but “freedom is our religion.” Throughout the Atlas event, at every opportunity, people implore each other: “Next year in Kyiv.”

Rainer Zitelmann is an author and German historian.