Ukraine and the Clash of Civilizations 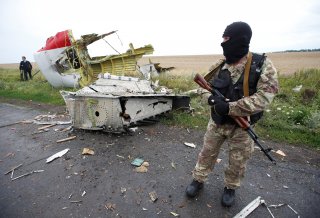 The hawkish think tank Institute for the Study of War (ISW) recently warned that Vladimir Putin is taking advantage of the coronavirus crisis to “advance his strategic objectives in Ukraine.” That ISW would focus on a nation that is largely irrelevant to American national interests and do so even in the midst of a terrible pandemic in the homeland is representative of the more general myopia of the American national security community. This myopia betrays a deeply flawed understanding of how the world order would be shaped at the end of the Cold War.

Consider just a few examples of how American leaders fumbled certain specific challenges at the end of the Cold War. When the first post–Cold War conflagration ignited in the former Yugoslavia, U.S. policymakers insisted that this artificial state be held together despite the intense ethnic and religious aspirations among the three major components of that fake country. The U.S. policy that emerged toward China was one of “constructive engagement,” naively assuming that the leader of a competing civilization with competing interests would want to Westernize. As Samuel Huntington pointed out, the Chinese believe that their “economic success is largely a product of Asian culture which is superior to that of the West, which is culturally and socially decadent.” In maybe the worst blunder of the post–Cold War period, the United States assumed that once Iraqis had been saved from a dictatorial regime they would rally to the flag of democracy, disregard centuries of ethnic and religious tensions and quickly embrace Western rights, values and outlooks.

What all these blunders have in common is the neglect of Samuel Huntington’s insight that the post–Cold War world was arranging itself along ethnic, religious and civilizational lines. Nations were throwing off artificial Cold War alliances and rallying around common historical ties. We should have been able to predict that Turkey would gravitate into the Islamic world and away from NATO’s interests, or that Orthodox Greece would be one of the most troublesome members of the European Union, or that Muslim Chechnya would seek independence from Orthodox Russia. As Huntington wrote, “In the post–Cold War world, the most important distinctions among peoples are not ideological, political, or economic. They are cultural.”

U.S. policy toward Russia has suffered deeply from failure to understand what most motivates the action of groups. Francis Fukuyama, who spoke for much of the foreign policy establishment, argued in 1989 that post–Cold War Russia was trending toward a political system in which “the ‘people’ should be truly responsible for their own affairs, the higher political bodies should be answerable to the lower ones, and not vice versa, and that the rule of law should prevail over arbitrary police actions, with separation of powers and an independent judiciary.” For many Western thinkers, it seemed inconceivable that Russia would choose the retrograde course of returning to its authoritarian and Orthodox roots.

Since Huntington’s insights and predictions were far more prescient than Fukuyama’s and those of many others, the U.S. foreign policy establishment should have heeded his advice when the crisis in Ukraine emerged. But, it did not.

Huntington predicted the crisis in Ukraine. His theory that nations would return to their historical and cultural roots had a natural corollary: nations that were divided between civilizations, so-called “cleft” countries, were the places that would most likely generate great-power conflict. Consider that, in the former Yugoslavia, the United States, Germany, Russia and prominent Islamic nations all lined up to support different proxies in the conflict according to shared civilizational commonalities.

By Huntington’s civilizational standard, Ukraine is a severely cleft country, divided internally along historical, geographic and religious lines, with western Ukraine firmly in the European corner and eastern Ukraine and Crimea firmly in the orbit of Orthodox Russia. Even though it was published years before the 2013 Ukrainian crisis, Huntington’s most famous book, The Clash of Civilizations, is rife with warnings about the dangers of the Ukrainian situation and predicts that Ukraine “could split along its fault line into two separate entities, the eastern of which would merge with Russia. The issue of secession first came up with respect to Crimea.”

As Huntington was the most sagacious observer of the most likely changes in the post–Cold War world order, we should carefully heed his advice on how to manage tinderboxes like Ukraine. Many casual readers of Huntington wrongly interpreted his thought and focused excessively on the word “clash” in the title of the book. They argue that Huntington advocated that the West clash with other civilizations to defend itself. A number of thinkers confused Huntington’s “clash” with Bernard Lewis’s thesis that militant Islam would spark a global clash between Islam and the West.

Huntington, in fact, warned emphatically against provoking the Islamic world and argued for caution and diplomacy in cleft countries such as Ukraine. He was adamantly opposed to crusading democracy promotion as a core component of U.S. foreign policy. On this subject, he wrote, “The principal responsibility of Western leaders, consequently, is not to attempt to reshape other civilizations in the image of the West, which is beyond their declining power, but to preserve, protect and renew the unique qualities of Western civilization.”

Huntington argued that most civilizational blocs emerging in the post–Cold War world would have natural leaders, what he called “core states.” Sinic civilization would be led by China, Orthodox civilization by Russia, and Western civilization by the United States. Since the Islamic world has no natural leader, a struggle for leadership would take place between Sunni and Shia and between the leading nations of the Middle East such as Turkey, Egypt, Saudi Arabia and Iran.

These core states are key to managing the challenges that would emerge in cleft nations such as Ukraine. Rather than sponsoring a proxy war in Ukraine and risking a bigger war, the leaders of the core states need to step back and acknowledge that both Russia and the West have legitimate claims in Ukraine and that a diplomatic solution is the only path forward. Whether that solution is a partition of Ukraine, a federation where the aspirations of both parts of the country are respected, or some other compromise—only sincere efforts at diplomacy on the part of Russia and the United States can solve this problem.

As the ISW paper illustrates, American policy toward Ukraine has been the opposite of what Huntington would have advised. It has been a crusading democracy promotion that led to a U.S.-backed coup d’état in Kiev, a refusal to recognize any legitimate Russian interests in Crimea and eastern Ukraine despite their deep historic ties, and the sponsorship of a proxy war in eastern Ukraine, the goals of which are unclear.

As America is ravaged by a pandemic and its consequences, the American people are going to be far less willing to tolerate a meddling, universalistic U.S. foreign policy in parts of the world having little connection to our interests. The way forward is the Huntington model of recognizing the legitimate interests of other civilizational regions, combined with genuine U.S. diplomacy as the leading tool of American foreign policy.

William S. Smith is Research Fellow and Managing Director of the Center for the Study of Statesmanship at The Catholic University of America. His recent book Democracy and Imperialism is from the University of Michigan Press.