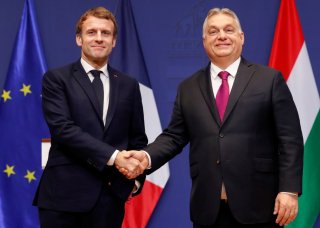 “I want to stop here and be honest. Once and for all, you have to decide for yourself who you are with.” Ukrainian president Volodymyr Zelenskyy said in a speech to the European Union (EU) where he singled out Germany for its failure to understand what is going on in Ukraine, and lambasted Hungary in particular for its neutrality. Pointing at the shoes of the Danube Memorial for the Holocaust, Zelenskyy targeted Viktor Orban, visibly angered at Hungarian reticence and neutrality, saying, “Look at those shoes, and you will see how mass killings can happen again in today’s world. And that’s what Russia is doing today.”

Under the superficial display of unity, across the Euro-Atlantic, severe differences remain within. Wartime hypothesis is always tricky, but so far, at the risk of generalization, three distinct subsets among the NATO and the EU states are visible. Their motivations are important for analysis, instead of a simplistic idea that there is some broad “Western” unity. They can be respectively termed as the status quo powers, the balancers, and the evangelicals. France, Germany, and Hungary are typical examples of status quo powers in this context. “The primary motivation for the status quo powers is to prevent the war from spreading, as well as to reach a settlement and restoration of commerce; the primary motivation for the evangelicals is to roll back Russia, and the primary motivation for the balancers is to ensure Russian invasion turns to a quagmire, without spiralling to a broader conflict.”

Despite Hungary, France, and Germany often falling on opposite sides regarding specific questions about the European Union’s future direction, on Russia, their alignment is visible. Hungary’s government strongly supported NATO’s decision not to establish a no-fly zone over Ukraine, and Hungary also said that they would veto a peace mission to Ukraine or the overflight of weapons over Hungarian territories. Hungarian minister of foreign affairs Péter Szijjártó abundantly made it clear that maintaining a no-fly zone would mean war, just as sending troops to Ukraine as peacekeepers would also risk war. “Hungary’s interest is clear: Hungary wants to stay out of this war, we will stick to NATO’s common position and reject proposals that risk either an air war or an extended war on the ground,” Szijjártó said in an interview, channeling Orban, arguing that the war must remain localized and not spread beyond Ukraine. “The Hungarian government is contributing to doubling the budget of the European Peace Facility, and arms supplies from EU member states are not blocked, but Hungary does not supply weapons to Ukraine, and lethal weapons must not cross the country.”

Incidentally, Hungary found alignment with Germany and France. French president Emmanuel Macron categorically ruled out any NATO intervention, or no-fly zone, and tweeted that while France cautiously supports sending defensive and lethal weapons, it wants NATO to avoid becoming a co-belligerent in the war. German chancellor Olaf Scholz recently declined to sanction Russian energy (termed as blood-money, by the Ukrainians), saying that it would result in a European recession. Interestingly, this also demonstrates a growing difference between Hungary and Poland, two nominally right-wing conservative governments (despised by the Western liberals) which are finding themselves on the opposite sides of the Russia question. Poland and Hungary are moving towards a division in the European Council, with Poland pressing to sanction Russian gas, oil, and coal imports and send NATO humanitarian mission to Ukraine, and Hungary blocking the sanctions, (alongside Germany) on energy imports and seeking to avoid any NATO involvement.

These groups of states, consisting of Poland, the Baltic states, and Finland, are what can be termed evangelicals. They are maximalist in their demands about balancing Russia, they are at the forefront in demanding that NATO needs no borders and NATO should be involved in out of the area and out of alliance operations. Poland recently wanted to corner the United States into delivering MiG fighters to Ukraine, only to be shot down by a baffled American administration, surprised at the Polish attempt at buck-passing. Lithuania and Estonia called for a no-fly zone (NFZ) over the Ukrainian skies, even when an NFZ will lead to a war, and even when a significant number of experts in the United States recently warned against being chain-ganged to a great power war. When Belgium, Germany, Austria, Hungary, and The Netherlands have so far spared Russian fossil fuels, Finland and the Baltic states repeatedly said that purchasing energy from Russia is effectively financing wars. Perhaps no one other than the Estonian prime minister has been most vocal about balancing Russia, to the point of an active conflict.

Finally, there are the roving balancers, who seem to be playing both sides, as classic balancers do. On one hand, Britain, and the United States are heavily in favor of raising the costs for the Russian invasion. Britain has been at the forefront of weapons supply while ruling out a no-fly zone and NATO involvement, a position similar to the United States, who in turn enforces some of the fiercest sanctions on Russia.

A few things should be considered. Until the end of the Cold war, rhetorical neutrality was a sovereign prerogative. States chose to stay neutral in regard to conflicts, as they desire, and global wars started due to the aggression of an imperial state against a neutral neighbor. Even during the Cold war, the Non-Aligned group of nations, while sympathetic to the Soviet cause, often aspired for rhetorical neutrality and both-sideism, at times with comical effect. That changed in the post-Cold war era with unipolarity and faith in the liberal arc of history. Unipolarity is now gone, and naturally, almost as a side effect, hedging and realism in foreign policy are back alongside the old school rhetorical neutrality. In that context, the Ukrainian war is the first war of the renewed multipolar world, where a great power invaded a much weaker neighbor—not for promoting values, but as a punitive campaign predicated on spheres of influence. And the differing calculations result in differing responses, Europe is slowly reverting back to the norm, where geography and interests trump ideology and values.

One can be inherently skeptical of open-source intel, but there is little doubt that the war so far has been a Russian tactical disaster. Whether it is a Russian strategic defeat, however, is still an open question. Consider that the Battle of Jutland was deemed a tactical defeat of Britain, with a lazy, complacent, and risk-averse British fleet having more ships sunk than the imperial Germans. But it was still a strategic victory, as Germany never ventured out into the sea again throughout the war. Everything depends on the war’s aims. Given that Russia would end up in a compromising position, wounded by its own folly, but also a long-term hostile presence in the eastern periphery of Europe, it would be interesting to see newer foreign policy realignments between previous ideological alliances.