On Ukraine, India Must Walk the Talk in its Quest for Global Leadership 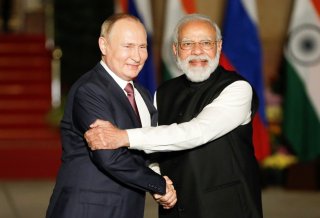 The situation in Ukraine is heating up. Russia has amassed over 100,000 troops on its border with Ukraine and is demanding guarantees from the West that the North Atlantic Treaty Organization (NATO) will not further expand to include Ukraine. NATO and the United States have rejected these demands and deployed thousands of troops in Eastern Europe in response. Yet while the West attempts to de-escalate the situation, India notably abstained from a U.S.-initiated United Nations Security Council vote—that ten other countries supported—on whether the crisis should be discussed by the United Nations.

Decoding India’s Vote at the UN

Even though phrases like “a balancing act” and “walking a tightrope” often sound like over-used cliches to describe states’ behavior, nothing better describes India’s current dilemma. In abstaining from the UN vote, India is attempting to replicate the neutral position that it took between the United States and Russia after the latter’s annexation of Crimea in 2014. This was unsurprising then, as it is unsurprising now. Both Washington and Moscow are India’s key partners: India’s growing security ties with the West do not detract from the fact that Russia remains India’s largest supplier of arms.

What’s at Stake for India?

Though the conflict is geographically distant from India, the conflict will have implications for New Delhi beyond the safety of the over 20,000 Indian nationals living in Ukraine. For starters, a conflict will divert additional American and European attention away from Asia, and particularly away from China’s actions and intentions. In recent years, Western attention was more focused on developing strategies for cooperation in the Indo-Pacific—the current strategic center of gravity—than on NATO, aligning with India’s security interests. Therefore, this diversion is troubling for an India that has been fighting Chinese military aggression at its borders.

The conflict will also alienate Russia from the West, pushing Russia further into China’s orbit, where Pakistan also resides. Russia's estrangement from the West will have obvious negative implications for India, given China’s border transgressions and India’s dependence on Russian military supplies. Besides, Indian neutrality in the wake of Russian aggression could complicate its relationships with the United States and Europe, thus putting decades of steady bilateral progress at risk. While the United States has long sought Indian cooperation in counterbalancing China in Asia, India and Europe have only recently begun seeing eye-to-eye on Chinese hegemonic intentions and attempting to diversify and strengthen their partnerships to address the China challenge. A Russian diversion in Ukraine coupled with an already volatile situation in Afghanistan, an energy crisis, and Europe concentrating on more pressing domestic concerns would likely avert this coordination, leaving India alone to deal with China.

Although the Biden administration has reiterated the importance of the U.S.-India relationship on its own merit, further Western sanctions on Russia could constrain India’s ties with Moscow, limiting its arms purchases and other forms of cooperation and business. These conflicting relationships would force India to eventually make tough foreign policy choices that will inevitably constrain the pursuit of its national interests. For instance, Indian ambiguity amidst a potential escalation of tensions could damage its hopes of receiving a U.S. waiver on its purchase of the Russian S-400 missile system—the same purchase for which America has imposed sanctions on Turkey—from CAATSA (Countering America’s Adversaries Through Sanctions Act) sanctions.

Besides, India’s desire to see the development of a more multipolar world order, where it sees itself and Russia as key actors, may require it to adopt a more proactive approach to curtail Russia’s isolation and subsequent dependence on China.

No More “Sitting on the Fence”

Critics have sometimes chided India for remaining neutral and ambiguous in response to global challenges, referring to this attitude as “sitting on the fence.” Instead of falling prey to rivalries between states, India claims the principle of strategic autonomy—where it charters an independent course based on national interest—guides its friendships. Strategic autonomy has guided India’s simultaneously significant relations with both Washington and Moscow, Tehran and Tel Aviv, and explains India’s membership in seemingly conflictual groupings like Russia-India-China (RIC) and the Shanghai Cooperation Organization alongside Pakistan and China.

Thus far, India has managed to balance these important partnerships, and may feel that choosing between key parties is unwarranted and even unnecessary at this stage. However, while being diplomatic and making customary statements on de-escalation in the current situation may suffice, a more tenuous and deteriorating situation in Ukraine could demand more concrete stances from India.

India has an opportunity to increase its heft in international affairs and make itself indispensable on the global stage. If Russia attacks Ukraine, the international backlash will likely be huge. The Europeans and Americans are already discussing comprehensive ways to further sanction Russia, likely advancing Russia’s dependency on China alongside prolonged estrangement from the West, which hardly serves Russian interests or ambitions in the long run. And as much as Europe depends on Russia for its gas imports, Russia, too, depends on Europe for its energy exports and revenues. Thus, an all-out war is not in anybody’s interests, including India’s.

As a key partner of Washington, Moscow, and Brussels, New Delhi is uniquely positioned to present itself as a credible interlocutor between Moscow and the West. The West is already pursuing the Normandy Format, coupled with bilateral negotiations with Moscow, to defuse ongoing tensions through diplomatic dialogue. But as Ukraine’s Foreign Minister Dmytro Kuleba highlighted, there is space for an Indian role in defusing the crisis, given its close relationship with both Russia and the United States. In fact, in early 2015, after Russia invaded Crimea and supposedly violated the ceasefire agreement, even the European Union sought India’s support in finding a peaceful solution.

Hoping the Ukraine crisis will eventually blow over without grave implications does not make for good policy. India can look to how Turkey, a much smaller country than India, has leveraged its close ties to Russia and Ukraine and offered itself as a venue for possible peace efforts. When a chance for constructive diplomacy presents itself, India must seize it to help prevent the outbreak of military action. Otherwise, India will be forced to choose between its close friends and take sides amidst a precarious conflict, which will directly affect India’s interests vis-à-vis important partners like Russia, the United States, and Europe, as well as hostile neighbors China and Pakistan.

Instead, a more proactive approach will bring India closer to its much sought-after goal of a permanent seat on the UN Security Council. India must walk the talk on its quest for global leadership and its path to becoming a “vishwaguru” by becoming integral to global peace and security and the interests of other nations.

Shairee Malhotra is a Foreign Affairs Analyst, with several years of experience working in think tanks in Mumbai and Brussels. She is also amongst the very few non-European nationals to have worked with the European External Action Service, the official foreign policy arm of the European Union, and was recently honored as a Top 40 Under 40 Europe-India Leader by the Europe India Centre for Business and Industry. Her writings have appeared in a wide range of publications including The National Interest, Haaretz, EU Observer, The Diplomat, and The Brussels Times, amongst others.