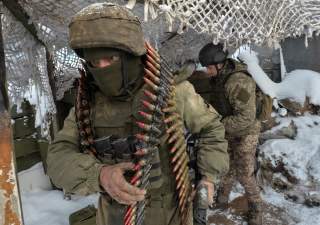 Ukraine, a middle-tier post-Soviet country, finds itself in the middle of the biggest scandal in U.S. politics since former President Bill Clinton lied under oath to protect discovery of his tryst with a White House intern more than twenty years earlier. President Donald Trump’s July 25 phone call with the newly-elected Ukrainian president Volodymyr Zelensky, in which he asks for a “favor” on behalf of his re-election campaign, finally nudged House Speaker Nancy Pelosi to launch an official impeachment inquiry she long hoped to avoid. The release of the whistleblower complaint, which detailed the Trump administration’s restriction of access to the call in an attempt to cover-up its contents, only poured gasoline on the White House’s impeachment fire.

Soliciting help from a foreign power against a domestic political opponent would be a grave abuse of power by any politician, but it is a cataclysmic breach of the public trust when the president is the offender. To use $400 million in U.S. military aid to bludgeon a foreign leader into doing political dirty work would be a damning misuse of U.S. taxpayer dollars.

But underneath the furor underpinning this latest White House controversy, it is worth noting the number of legitimate reasons why U.S. security assistance to Kiev should be re-evaluated—none of which have anything to do with what Trump may or may not have said on the phone. As Cato Institute senior fellow Ted Galen Carpenter said in a recent op-ed, “Washington’s entire Ukraine policy fairly cries out for a comprehensive reassessment.”

No leader in Kiev would turn up their noses at Washington if it offered to sell them Javalin anti-tank rockets. Former President Petro Poroshenko spent years asking Washington for the weapons during the Obama administration before he finally received a batch of the missiles early in Trump’s tenure. For Ukrainian politicians, U.S. security aid was not only about improving its ability to fight Russian-backed separatists on the ground, but a way to nurture and strengthen what Kiev hoped would be a long-term relationship with Washington.

No amount of weapons deliveries from the United States, however, could compete with the support Russia provides to its own proxies on the other side of the contact line. Because Ukraine is a geopolitical matter of life and death for Moscow, it will always be more willing than Washington to invest and take risks. To the Americans, Ukraine is a European outlier with a lackluster economy and a corrupt political system (something Zelensky is trying to address). To the Russians, Ukraine used to be a crown jewel of the Soviet Union and is now a large neighbor to the west with a significant Russian-speaking population and a shared waterway in the Black Sea. Washington would be able to live just fine with a pro-Russia Ukraine. Moscow, however, would find it hard to stomach a Ukraine drifting into the West’s camp. A few hundred anti-tank missiles and boxes of ammunition stamped with “Made in the USA” won’t make this geopolitical fact any less true.

The War in the East May Get More Violent

Proponents of U.S. military aid to Kiev argue repeatedly that such shipments allow the Ukrainians to better defend themselves in the face of separatists in the east who would otherwise outgun them. Better military capability on Kiev’s side would therefore balance out any advantages the separatists have and make further territorial advances more difficult. But there are very few advances by either side on the ground right now. While sporadic shelling and sniper attacks continue along the entrenched three-hundred-kilometer frontline separating the combatants, the war in the Donbass has been stabilized. Ceasefire violations occur nearly every single day, but the lines are essentially fixed in their current positions. There is a tenuous understanding on both sides that incursions from one will lead to counter-incursions from the other. Tactically speaking, there is no need to balance the conflict because it has been balanced for years.

For the first time since Germany and France helped solidify the Minsk agreement in 2016, Kiev and Moscow are tinkering with ending the four-year long war. Zelensky’s winning campaign was focused on freeing Ukrainians from Russian prisons and exploring ways to strike a peace deal as quickly as possible. The mutual withdrawal of personnel from the town of Stanytsia Luhanska in June and the prisoner exchange between Ukraine and Russia in September have opened up a narrow window of opportunity to rejuvenate the stalemated mechanism otherwise known as the Minsk process. Kiev’s willingness to pursue additional redeployments from the frontline if the separatists respond with redeployments of their own add additional momentum in preparation for a meeting of the Normandy format in France next month.

The meeting may come to nothing; indeed, if Ukraine and Russia don’t seek a compromise on how the Minsk protocols are implemented, then diplomacy could die as fast as it has re-emerged. But the dialogue will die even quicker if one side in the war—Ukraine—is rearming at the expense of the other. Moscow won’t allow it.

Trump wasn’t wrong to ask questions about the hundreds of millions of dollars Washington has given to Ukraine since Moscow invaded and annexed the Crimean Peninsula in 2014. There are larger geopolitical issues which must be considered, including the high probability of the Russians simply escalating their own military support to anti-Kiev forces. Unfortunately, domestic political factors should not have been guiding his decisionmaking.

Daniel R. DePetris is a columnist at the Washington Examiner and a frequent contributor to the National Interest.