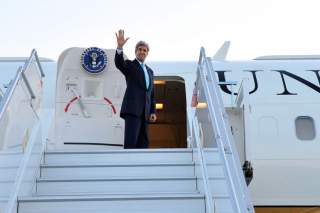 Though the intensity of Western discourse about Ukraine might lead one to conclude that serious strategic interests are threatened by Russia’s annexation of Crimea and meddling in eastern Ukraine, the United States and even its allies have few interests in Ukraine, and our past and present policies are at odds with the interests we have.

Once, foreign policy experts talked about “vital interests." The term has fallen into disuse, partly because there are no hard and fast rules for calculating what distinguishes the "vital" from the merely "interesting." If advocates wanted their country to do a thing they would call it a vital interest; if they did not, then they would not. But students of foreign policy did seem to agree on one thing: vital interests were the things you were willing to have your soldiers die for and kill for. By this measure, even the most hawkish politicians in the United States, all of whom have eschewed any desire for a shooting match, have agreed that the United States has no vital interests in Ukraine.

What would vital interests look like if they were present? Vital interests affect the safety, sovereignty, territorial integrity, and power position of the United States, or indeed of any country. If, in the worst case, all Ukraine were to "fall" to Russia, it would have little impact on the security of the United States. Russia is no longer the strong country that the USSR was: its GDP is dwarfed by that of the United States. Its non-nuclear military power is woefully insufficient for the conquest of the major states of Eurasia. The possession of Crimea, a grab for Ukraine's eastern provinces, or even the occupation of all Ukraine would not change this. Indeed, the military conquest of Ukraine would be costly to Russia because as one moves westward, one encounters ever-more-nationalistic Ukrainians, who have a historical propensity to fight. Russian forces facing west would find themselves with a fifth column in their rear.

Geography alone can sometimes create a vital interest. If Ukraine were Mexico, the United States would have an interest in protecting it from Russia or anyone else. For Russia, Ukraine is Mexico, and in their eyes, the United States and its Western allies have been inexorably creeping in their direction since the end of the Cold War. Russian interests in Ukraine probably exceed NATO's, which is why modest sanctions are unlikely to coerce Russia into passivity. They do not want Western political, economic, and military power on their border. Of course, the easternmost members of NATO would not like Russian forces on their doorstep, but because they are all too weak to defend themselves, or too confident in the United States to bother, their security depends much more on whether the United States will make good on its alliance commitments than on whether Russia shares a border.

The United States does have one security interest in Ukraine. Though it is not a vital interest, the preservation of an independent neutral zone between NATO and Russian military forces has been a stabilizing factor in east-west relations. During the Cold War, especially in Germany, NATO and Soviet forces faced each other head to head. Even their non-nuclear forces had powerful offensive capabilities—thousands of tanks and aircraft that could strike deeply into the other's territory. The two sides also possessed large numbers of nuclear weapons, and had the command, control and plans in place to use them if necessary. This was a nervous relationship, fraught with the possibility of escalation and mutual disaster. This is a world that neither we nor the Russians should wish to recreate, even with the diminished forces Russia now possesses. The United States and its allies succeeded in managing this for forty years, and we could do it again if we had to. So preventing this is “nice to have” but not “need to have.” Indeed, trying to prevent it by force brings on the very thing we should wish to avoid. But maintaining a wide military buffer zone is a real security interest, and the only one worth pursuing in Ukraine.

For the last twenty years Ukraine and Belarus have kept NATO and Russian forces far apart. This was an underappreciated benefit. NATO's flirtation with admitting Ukraine into the alliance simply ignored the new risks that would be assumed. If Russia were to occupy all of Ukraine, we would return to this unhappy standoff. If NATO forces were to help Ukraine resist Russia militarily, we would also return to this situation. This is neither in Russia's interests, nor in ours. It is far better to negotiate a mutual "hands off Ukraine" agreement. Diplomacy, sanctions (and the threat of more), and economic assistance (bribes) to Ukraine are the tools that the West should use to restore the status quo ante.

Western liberals will be quick to decry any security agreement reached over the heads of the Ukrainians. The crisis in Ukraine, however, is a direct consequence of the fact that Ukrainians do not agree on the extent to which they should be associated with the West or with Russia. This disagreement threatens to tear the country apart. If Ukraine falls into civil war, with Russia and the West aiding their respective favorites, the risk of a direct NATO-Russia clash also rises. To ensure peace between Russia and the West, the question of foreign alignment should be taken out of Ukrainian politics.