Ukraine Presents an Opportunity to Forge a New Global System 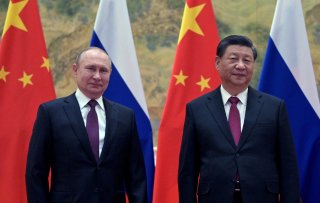 The Russian attack on Ukraine is one of several proofs that the global power balance has shifted. Such an attack would have been unthinkable one or two decades ago. Now it took place. It presents the West (the United States and Europe) with an opportunity to shape a new global system after the first chance to do so in the 1990s, and a second one in the aftermath of September 11, 2001, was wasted.

The challenge is to shape a grand coalition to stop the attack on a rule-based global system spearheaded by Russia. It must reach beyond Western countries; otherwise, it is seen as a racket for the West to pursue its own interests. It can be done. But only if the West is willing to read the global picture and realize that many countries outside the Western sphere have a different value system. To expect the rest of the world to adopt Western values and even more so within an extremely short time span measured by history is an illusion. Just recall how long it took the West to build democracy and a market economy.

The big prize is to pry China away from Russia. Economically, China’s goals of high and persistent economic growth cannot succeed if it links up with Russia instead of the West. Indeed, China’s millions of people were not lifted out of poverty until it jumped almost headlong into market-controlled economic globalization. The policy of riding two horses at the same time is not tenable.

China keeps the West at a distance and sticks to an alliance with Russia, which seems to run counter to its basic interests. Is the United States’ value-based foreign policy the reason? The Chinese leadership certainly perceives it as a threat. Beijing has done its homework and concluded that this is what destroyed the Soviet Union. It must not happen to China. Unless the West and, in particular, the United States realize this and adjust current policies, a grand alliance cannot be forged and autocrats around the globe will feel relieved.

The West congratulated itself on the victory over the Communist challenge. Without much questioning, it went one step further by adopting the view that liberal representative democracy was the best system not only for the West, but worldwide. Political forces favoring democracy inside other countries were supported, often in contradiction to laws in these countries and undermining social and political stability. In the West’s eyes, it was legitimate and justified to strive to spread freedom in a broad sense around the globe. Foreign governments classified it as interference in their domestic politics; even an effort to enforce regime change. A conceptual clash revealing a global split about political ethics and human rights was ignited, waiting to explode.

We are now seeing the result. When Russia’s attack on Ukraine was taken to the United Nations General Assembly on March 2, 2022, the West stood united to defend the onslaught against democracy. The world less so.

The text was watered down from “condemn” to “deplore” the aggression of the Russian Federation. The real shock is that even after this step, thirty-five governments representing about 45 percent of the global population did not want to support democracy against aggression and stop a clear-cut case of unilateral action to redraw borders using military force.

The Biden administration’s focus on human rights and hard-nosed strategic interests has, not surprisingly, turned out to be adversarial. The obstacles to promoting human rights are inversely proportional to U.S. global power and influence. China is pushed towards an alliance with Russia. India, classified as an ally in this game, is reluctant. Saudi Arabia’s crown prince declines a call with President Joe Biden while accepting a call from President Vladimir Putin and stalls on requests to pump more oil.

The art of diplomacy will often be to reconcile apparently contradictory issues and reply “both” to the question “either-or.” Consequently, the West should be spurred to rethink not whether, but how to promulgate democracy. The drive for fundamental freedom around the world must not be stopped. For millions of people living with suppressed fundamental freedoms, there must be hope for a better life. But it should be done in a more effective and subtle way without antagonizing foreign governments who defend themselves against what they see as outside interference, and by doing so make life less free for citizens.

The first step is to make the model work better at home. The more the model supports ordinary people and helps them in their daily life, the more attractive it becomes in the eyes of other people living with a less efficient political system. That was the reason the West won the Cold War.

The second step is to abandon all kinds of barriers for the exchange of people. Let people from all countries not having democracy come and see how good the model is. Let it speak for itself to convince them that it may be worthwhile, possibly in an amended form, to adopt at home.

Don’t lecture others about the virtues of the model, let them speak for themselves.

The Need for Institutional Economic Reform

The West is still sufficiently strong to put its fingerprints on a new global economic system albeit the main thrust must be to accommodate the rest of the world, absent at the negotiations seventy-five years ago when the existing system was shaped by the United States and Britain.

The global steering system (the UN system, the International Monetary Fund, the World Bank, and the World Trade Organization) is still almost identical to when it was set up in the late 1940s. There are limits to how long emerging countries and developing economies (EMDE) will go along with institutionalized economic globalization under Western control when the scales of economic activities tip against the West. A key sentence in diplomacy is that treaties are only worth the paper they are written on if reflecting realities.

The West should take the initiative to reform the institutionalized framework for economic globalization however painful it may seem. The price for not doing so will be much higher than the loss of influence.

The Chinese leadership is fully aware of economic globalization as the foundation for China’s economic rise. President Xi Jinping incessantly repeats that China supports the global economic system and reaches out to the West in an effort to retool the system. He did so at the Davos meeting in 2017 and again in 2021. Unfortunately, the West did not respond. U.S. influence on institutionalized economic globalization is still preponderant, albeit its sliding share of global GDP connotes diminishing influence. The entrance door to reform may start to narrow.

Events in Ukraine have reinforced and not weakened the West’s hand—contrary to what might have been feared. Much to the surprise of many authoritarian states and illiberal democracies—and maybe itself—the West did not back off when confronted with what might have been the death bell for its global position.

The real danger to the West is its conviction of primogeniture and the right to lecture others about what kind of society they should adopt, namely a copy of the model adopted by the United States and Europe. If the West acts with magnanimity, benevolence, and is heedful of its policies on other nations and cultures, Russia’s aggression may reinvigorate Western values. Ukraine’s stout defense conveys the message that the model strikes at deeper values than seen at a first glance and contains values that might also work, amended for sure, outside the West.