Ukraine Protests as Russia Returns to the Council of Europe 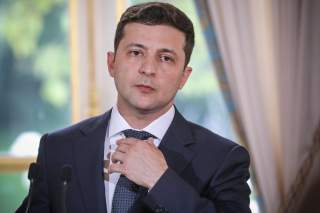 Russia was suspended from the Council of Europe in 2014 after its seizure of Crimea. Crimea remains annexed to the Russian Federation, with no sign that Moscow will ever return the peninsula to Ukrainian control, yet its voting rights were restored, a little more than five years later. There are only two conclusions that can be drawn from this: either the exercise of Russian authority over territory that the rest of Europe still recognizes to be sovereign Ukrainian territory is no longer a violation of European standards—or that key European players have decided that this is no longer a central organizing principle of their relationship with Russia.

Of course, this act followed the routine six-month extension of European sanctions against Russia, so the signal being sent from Europe is quite confused. Yet this decision comes right after new Ukrainian president Volodymyr Zelensky had met with German chancellor Angela Merkel and French president Emmanuel Macron and asked them to prevent Russia's reinstatement from occurring.

The position taken by Germany and France is that the decision does not constitute approval of Russia's annexations in Ukraine—but is a necessary step to restore channels of dialogue with Moscow. The fact that during the Russian suspension Moscow has not paid its dues to the Council—representing approximately seven percent of its budget—may have also contributed to the willingness to reinstate Russia.

Official reaction from both Berlin and Paris stresses that this decision does not portend a major reversal in European policy towards Russia; that non-recognition of Crimea's annexation remains the united stance of the rest of the continent. Quietly, analysts will whisper that the Council of Europe is not that big a deal in the grand scheme of European affairs. But Zelensky is correct to be worried.

Even if the venue is minor, this decision represents a coming down from the principle that Russia could not restore normal relations with Europe as long as Crimea remained in its possession. Having taken this step, it becomes easier, down the line, to restore other aspects of the pre-2014 Russia-Europe relationship. Crimea may end up joining Abkhazia, South Ossetia and North Cyprus as unrecognized territorial changes in Europe that have been set aside in the grand scheme of things.

It also suggests that the last-minute U.S. effort to try and sanction Russia's energy lines that bypass Ukraine to directly connect Moscow to its European customers will not gain sufficient support or momentum. Russia may not get existing European sanctions lifted, but the likelihood that Europe will join the United States in new sanctions seems quite unlikely. Instead, Rome, Berlin and Paris seem committed to opening new lines of contact with Moscow that do not run through Ukraine.

Ukraine needs to keep its concerns about Crimea and Donbass directly linked to the European (and American) relationship with Russia in order to retain any leverage over Moscow. Ukraine was successful in pushing back against efforts in 2017 to quarantine the Ukraine issue from efforts to shift the focus of the U.S.-Russia relationship in favor of focusing on the Middle East. Any sign that the Ukraine question is being compartmentalized is the first step towards a de facto acceptance of the current status quo—and opens the way for Ukraine to remain a "frozen conflict" that is set aside in favor of other concerns. Along with the Council of Europe decision, the Zelensky government cannot be pleased with the decision of the Trump administration to go ahead with a formal meeting with Vladimir Putin at the G-20 summit, even though the stated conditions for such a meeting, outlined last year, required the release of Ukrainian sailors taken prisoner during the Kerch strait incident. (At the time of writing, the Ukrainian naval personnel had yet to be released.)

The trans-Atlantic consensus that Barack Obama and Angela Merkel forged on Ukraine has held for five years—even as more pro-Russian governments have come to power in different states in Europe and as new disruptions in the Euro-American relationship occurred during the Trump administration. Whether the decision to reinstate Russia in the Council of Europe represents an exception or an opening wedge remains to be seen.