Ukraine Is a U.S. Wake-up Call for Germany and Turkey 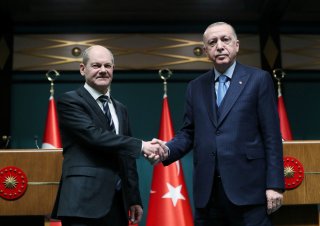 With the Russian invasion of Ukraine now well into its second month, America’s foreign policy establishment is offering critiques of how two of NATO’s larger powers, Germany and Turkey, are responding to Russia. Any such effort must acknowledge the starkly different roles these two nations played pre-invasion.

For years, German chancellor Angel Merkel and her cheerleaders on this side of the Atlantic openly bristled at observations that Berlin was too friendly to Moscow and increasingly addicted to its hydrocarbons. The Washington, DC smart set jumped to her defense when then-President Donald Trump in July 2018 uttered what had become readily apparent: “Germany as far as I am concerned is captive to Russia.” Until the morning of the invasion, most of the Washington elite glossed over what Tablet’s Jeremy Stern recently called Germany’s “decades of emotional and economic investment in the Russian state.”

Stern noted that, even after the 2014 seizure of Crimea, Vladimir Putin pushed against an open door in his dealings with Merkel, most notably when “Merkel successfully lobbied for a restoration of Russian voting rights in the Council of Europe, a human rights organization, despite no change in the developments that had led to its suspension in the first place: Putin’s occupation and destabilization of Ukraine.”

Only after Russian tanks rumbled into the rest of Ukraine did new chancellor, Olaf Scholz, finally cop to the strategic mistakes of the past and approved lethal weapon exports. Politico quoted Foreign Minister Annalena Baerbock at the Berlin Energy Transition Dialogue earlier this week explaining that “we knew, or we could have known, that it was not only stupid to place all our [energy] security policy cards on just one country, but that it also wasn’t a smart idea to put them on that particular country.”

Volodymyr Zelenskyy also made clear that the Germans weren’t being let off the hook. The Ukrainian leader addressed the Bundestag in mid-March and gave blistering remarks that at times seemed almost Trump-like. According to the Times of London, Zelenskyy “accused Germany of ignoring years of warnings about the Kremlin’s malign intentions, dragging its feet on sanctions such as an embargo on Russian fossil fuels, and hindering Ukraine’s efforts to join the European Union.”

The Woodrow Wilson Center’s Ambassador James Jeffrey is among the few members of the foreign policy community pointing out how the United States treated a generation of German-Russian comradery with kid gloves while Turkey, which boasts the alliance’s second-largest military, got excoriated when it purchased Russian S-400 surface-to-air missile batteries and subsequently ejected from the F-35 fighter program. During a webinar last year, Jeffrey observed, “Germany and the United States have institutional, personal relationships, and even ideological buffers that, no matter how bad the issues are, get everybody emoting about how important it is to paper these things over.”

Indeed, Turkey looks north across the Black Sea and sees the Kremlin’s naval vessels shelling the area around Odessa, while along its southern border it faces the catastrophic consequences of President Barack Obama’s 2015 invitation to Putin to insert his military into civil war-torn Syria. (Turkey isn’t alone in feeling betrayed. Obama’s gesture has also proved disastrous for Israel’s security, as Russia has effective veto power over Israeli strikes on Iranian and Hezbollah targets inside Syria.)

Unlike Germany, Turkey is sandwiched between Russian forces and has weighed its options carefully, seeking to avoid both a military confrontation or further damage to its already hurting economy. While President Recep Tayyip Erdogan early and openly condemned the invasion, Turkey has elected not to impose sanctions and instead offered to play mediator in the hopes of securing a ceasefire.

“[Turkey] has made a habit out of thwarting Russian overreach without triggering a sense of existential threat to Russia itself,” according to geopolitical consultant and retired Army officer Richard Outzen, citing successful actions in 2020 in Libya, Syria, and the South Caucasus.

Moreover, Turkish military cooperation with Ukraine since the seizure of Crimea has proven indispensable. In particular, Turkey’s Bayraktar Tactical Block 2 unmanned combat aerial vehicles destroyed so much Russian armor in the first week of fighting alone that “Bayraktar” is now the title of a popular Ukrainian song, played alongside a video featuring some of the drones’ battlefield kills.

Turkey and Ukraine have also been major trading partners, with bilateral trade surpassing $7 billion in 2021, and a free trade agreement was inked days before the invasion

American critics of Erdogan raise human rights concerns that generally don’t exist in Germany, but it’s past time they and others inside the foreign policy establishment concede that, like during the chilliest moments of the Cold War, Turkey remains an indispensable NATO partner.

Jason Epstein is president of Southfive Strategies, LLC, an international public affairs consultancy in New York and Washington. He was a member of the Turkish Embassy's public relations team in Washington, D.C. from 2002 to 2007.

Adinda Khaerani is an international relations specialist/researcher at the Center for Diplomatic Affairs and Political Studies (DIPAM) in Istanbul.