Ukraine Wants to Be a Part of the West 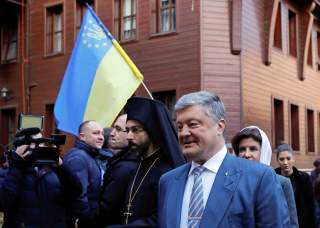 Ukrainian president Petro Poroshenko has staked his country’s future and his own chances at re-election to a second term on three gambles. He hopes that these gambles will permanently rupture Ukraine’s connections to Russia and ensure that Ukraine becomes a full member of the Western community of nations. So far, however, the scorecard is showing mixed results.

After the Euro-Maidan revolution overthrew then-President Viktor Yanukovych, sending him fleeing into exile in Russia in 2014, the Kremlin began an ambitious effort to route its major geo-economic linkages to Europe in order to completely bypass Ukraine. (Yanukovych, for all of his faults and corruption, had successfully blunted earlier Russian attempts to do so by offering concessions on gas transit and the Black Sea fleet.) Initially, the European Commission aided Ukraine’s position by effectively blocking the South Stream pipeline. Moreover, the 2015 rupture in Russia-Turkey relations after the shootdown of a Russian fighter jet by the Turkish Air Force on the Syria-Turkey border seemed to presage Ankara moving into its traditional role of blocking Russian ambitions in the Black Sea region. These developments, however, have proven to be temporary.

Poroshenko relied on assurances from the United States and some of its central European allies like Poland that Russian pipeline projects to Europe bypassing Ukraine would be permanently stopped. However, steady Russian efforts have chipped away at those assurances. Turkish Stream is now becoming a reality, with Turkey likely to cease all of its gas importation from Russia via Ukraine, and the second tranche of that line will give Russia direct access to Southern European customers. More critically, the Nord Stream II project has begun to lay pipeline, doubling Russia’s capacity to send gas to Germany and the European core directly via the Baltic Sea.

Ukraine may hope that U.S. ambassador Richard Grenell’s blunt warning to European firms engaged in Nord Stream activity that they could face U.S. sanctions will cause European companies to absorb the losses that would come from abandoning Nord Stream II. However, Gunther Oettinger, the EU budget commissioner, concedes that the project may be too far along to be canceled. Meanwhile, Ankara is determined to replace Ukraine as a key energy hub for Russian deliveries to Europe, with both Greece and Bulgaria examining ways they can develop the necessary interconnectors to link Russian gas sent to Turkey into the European distribution network. Ukraine may have to rely on the efforts of German Chancellor Angela Merkel’s for a solution. Merkel’s diplomatic efforts aim to extract from Moscow promises that some Russian energy will continue to transit Ukraine, providing much-needed revenues for the Ukrainian economy. In return, Berlin would provide Moscow guarantees that Germany will not cancel Nord Stream II.

Ukraine has also had mixed results in the security assistance field. It is receiving more shipments of U.S. weaponry and arms provided by other Western powers, as well as expanded efforts by U.S. forces to train Ukrainian military personnel. Moreover, Ukraine today is receiving further assistance in reconstructing its military to be more capable. Yet, if the “probe” into the Kerch Strait in November was meant to showcase Ukraine’s ability to show its flag and maintain its maritime claims, the end result was less than satisfactory. Not only did Ukraine lose control of some ships and had sailors taken captive, but Russia also did not suffer any additional penalties from the European Union. It also exposed divisions within the North Atlantic Treaty Organization as to what role the alliance should be playing in the Black Sea and what commitments the alliance ought to make for Ukrainian security.

Finally, there is the question of the Orthodox Church. Poroshenko succeeded where his predecessor, Viktor Yushchenko, did not, in getting the Patriarch of Constantinople to recognize as canonical the two independent Ukrainian jurisdictions, which have subsequently unified into a single Ukrainian Orthodox Church that exists independent of the Moscow Patriarchate. That Poroshenko views this development as a major political victory is made clear by his so-called “Tomos tour”—traveling to Ukraine’s regions to display the decree signed by Patriarch Bartholomew of Constantinople creating the Orthodox Church of Ukraine.

The test that he now faces, however, is whether or not those Orthodox parishes, clergy and believers who remain part of the Moscow Patriarchate will choose to leave Patriarch Kirill’s jurisdiction and affiliate to the Orthodox Church of Ukraine headed by Metropolitan Epiphanius (Dumenko). So far, there have been dozens of parishes, primarily in Western Ukraine, who have switched—as charted by the Religious News Service of Ukraine. But what happens if others decided to remain with Moscow, starting with the monastery of the Caves in Kyiv itself? After all, the experience of Estonia—where the Patriarch of Constantinople similarly restored a separate Estonian Orthodox Church in 1996—suggests that not all Orthodox will necessarily leave Moscow’s embrace. The question for the Ukrainian government will be whether to apply pressure or to accept, as the Estonian government did, that Orthodox can continue to choose between a home-grown church or one affiliated with Moscow.

Whether Poroshenko wins re-election or another candidate is chosen as president, Ukraine in 2019 will have to navigate the possible loss of revenues if Russia succeeds in curtailing energy transit across Ukraine. Furthermore, the president will have to do this while seeking to deepen security ties with the West and dealing with how the Church situation unfolds. Five years after the Euro-Maidan revolution, Ukraine’s westward trajectory continues, but roadblocks still remain.