For Ukraine, Weakness Could Be Its Greatest Strength 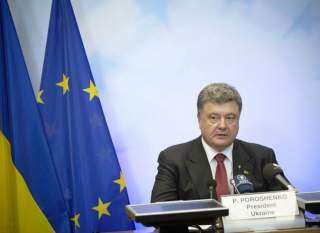 The United States and the EU have demonstrated significant commitment to Ukraine’s success since the Maidan revolution. However, no Western leader has ever suggested that Ukraine has a blank check—that the Western commitment is without limits. Instead, as evidenced by the measured extent of financial and military assistance to Ukraine, this commitment is both limited and conditional. In particular, if Kyiv’s promises to implement meaningful reforms are not fulfilled soon, then Western support might evaporate.

Russia has also demonstrated significant commitment to achieving its objectives in Ukraine. The Kremlin has shown willingness to incur significant costs—international sanctions, political isolation and economic and human losses from the military conflict—since the crisis broke out a year ago. Thus, in contrast to the West, Russia’s actions demonstrate that its commitment in this conflict is essentially unconditional and unlimited.

Thankfully, Ukraine’s circumstances have not deteriorated to the point of the U.S. big banks in 2008, when the federal bailout demonstrated that they were in fact too big to fail. But the threat of a dramatic deterioration in Ukraine’s security or economic conditions looms large in 2015. Policy makers in Kyiv certainly need to prepare for the worst. After a year of nearly every Western leader proclaiming firm commitments to Ukraine, some of those policy makers might well believe that they can still take certain risks; after all, they might reassure themselves, the West will never allow Ukraine to fail. While we cannot say with certainly that such a reassurance is baseless, there is strong evidence to suggest precisely that.

Take, for example, Washington’s recent passage of the Ukraine Freedom Support Act, which observers in both Kyiv and the West have characterized as a major step forward in the U.S. commitment to the security and prosperity of Ukraine. But the way it changed as it evolved from bill to law runs counter to this narrative.

In the initial draft that passed the Senate Foreign Relations Committee, Ukraine was classified a “major non-NATO ally” (MNNA). The term has a largely technical meaning that relates to arms export procedures and security cooperation; it is not the same as a mutual defense treaty. But both in Ukraine and beyond, many, including President Petro Poroshenko, seemed to believe that MNNA implies just that. For Washington, regardless of the technical meaning of the term, granting MNNA status to Ukraine would have represented a much firmer commitment to Ukraine’s security, since violations of it would have undermined the credibility of all U.S. alliances.

But, in the end, the MNNA provision was removed from the final version of the bill. Further, essentially all other measures in the legislation—including both military assistance and sanctions on Russia—grant authorities to the executive branch, but do not compel it to act.

In short, the new law does demonstrate U.S. commitment to Ukraine’s security, but its transformation shows the profound limits of that commitment. It should be a cautionary tale to President Poroshenko and the Ukrainian elite as a whole. They can rely on the United States for support, but the United States will not guarantee Ukraine’s security. In the short term, that means Kyiv will be largely on its own if Moscow decides to break the tenuous ceasefire and push deeper into Ukrainian territory.

Some argue that if the security situation deteriorates dramatically, the United States and its allies will be compelled to intervene, because they could not countenance the permanent dismemberment or occupation of a European state. In fact, they did just that in the case of Cyprus. Since its 1974 invasion of the island, Turkey has illegally occupied the sovereign state of the Republic of Cyprus. Following the north’s 1983 declaration of independence as the Turkish Republic of North Cyprus (TRNC), Turkey recognized it, and it remains the only state to have done so. To this day, Turkey maintains between 30,000 and 40,000 troops on the one-third of the island controlled by the TRNC despite numerous UN Security Council resolutions since its initial invasion calling for immediate withdrawal.

The UK, as a guarantor of the treaty granting Cyprus its independence, had a legal obligation to “undertake to prohibit . . .any activity aimed at promoting . . . partition of the Island.” Despite the presence of UK servicemen at its two bases on the island, London did not act militarily to stop Turkey’s invasion. The United States had no treaty obligation, but beyond the UNSC, its response was restrained: a three-year embargo on U.S. military grants and arms sales to Turkey was the most severe measure adopted.

Ukraine faces an acute economic crisis that represents no less a threat to its survival than Russia does. Kyiv has come to rely on assistance from the International Monetary Fund and Western donors to survive; yet the Western commitment to support Ukraine financially is limited. Indeed, Moody’s has recently warned that Ukrainian default is very likely, pointing out that the country’s current bailout package provided by the IMF, EU and other donors is not sufficient to cover $10bln external debt repayments that come due this year. The Economist suggests that Ukraine needs an additional bailout of $20bln, noting that despite chatter about a “donors conference,” no government seems willing to put up the money. Earlier this month, the Ukrainian prime minister visited Germany, but came home without any major pledges, securing just a 500-million-euro loan for redevelopment of the eastern Ukraine. Last week, the U.S. Treasury announced up to another $2bln in loan guarantees in addition to the $1bln guarantee made last year. But this new package has been explicitly linked to the Ukrainian government’s following through on its reform pledges and sticking to the IMF program. Meanwhile, the IMF mission arrived back in Kyiv on January 8, but will the Fund pay and will it pay enough? If Ukraine cannot secure a bailout, it will have to restructure its debt obligations after default or under its shadow.

Under the current international laws, sovereign bankruptcy is extremely messy and unpredictable, which motivates all involved parties—the creditors and the sovereign—to avoid default. Perhaps it is this consideration that gives the Ukrainian authorities confidence that the IMF and the West will continue to pay. This, too, is an illusion, as history has demonstrated creditors’ goodwill does not last forever. In the late 1990s and early 2000s, Argentina, Russia and Pakistan defaulted on their sovereign debt, while Ecuador and Ukraine itself were forced to restructure to avoid default.

But what about charitable and strategic considerations of the West vis-a-vis Russia? George Soros has recently made a passionate case for the importance of supporting Ukraine in face of the Russian aggression and building a coalition of donors above and beyond the IMF package.

The evidence suggests that even if such pledges were to materialize, there is no guarantee that the donors will honor them. A case in point is Haiti. A devastating earthquake there in 2010 killed 300,000 people and left 1 million homeless. International sovereign donors were quick to pledge $5.37bln for the recovery effort between 2010 and 2012. (These numbers exclude pledges for humanitarian relief efforts and pledges by private donors.) The UN Office of the Special Envoy to Haiti reports that by the end of 2012, only 56 percent of the pledged aid was disbursed and that out of fifty-five donors, only eighteen donors delivered 100 percent of promised funds.

All this suggests that Kyiv should not comfort itself that the West will guarantee Ukraine’s security or solvency if push comes to shove. Ukraine’s situation today is made even more dire by the differences in relative levels of Western and Russian commitment in Ukraine. As we have learned from the past year, in Ukraine, Russia is willing to do severe damage to its international standing; absorb the economic body blows of U.S. and EU sanctions; and spend significant treasure and blood to prevent the Ukrainian military from achieving victory in the East. President Vladimir Putin seems ready to take his country down in flames to pursue his goals. Clearly, on the global level, Russia is no match for the West—in terms of its conventional military or its economy. But on the level of Ukraine, Russia’s significantly higher level of commitment more than compensates for its weakness.

Nevertheless, the West’s limited commitment is actually a good thing for the Ukrainian people; it avoids creating a moral hazard trap for their leaders, who might well be tempted to avoid tough reforms if Western commitment were unlimited and unconditional. Indeed, the limited and conditional nature of Western commitment imposes pressure on the government to carry out politically painful but urgently needed changes in the governance of the country. The weakness of Ukraine and the existential threat of the twin security and economic crises have created an opportunity to break the long-standing barriers to reform. Absent today’s dire circumstances, there would be no chance for Ukraine to free itself from the grabbing hands of the oligarchs, who brought the country to its current state. In the words of Thomas Schelling, sometimes weakness is a strength.