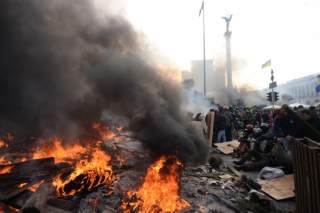 MOSCOW–After spending several days in and around Donetsk last week, I found it hard to escape the conclusion that the second Minsk ceasefire is rapidly unraveling. Nearly continuous artillery shelling and machine-gun fire could be heard for the better part of Thursday morning in the city’s Oktyabrskaya neighborhood, not far from the airport, where fighting is said to have continued without surcease.

The OSCE reported that the main railway station in the city was shelled on March 25, and a visit to it the day after showed that to be so. Rebel tanks could be seen participating in exercises on the rural outskirts of Donetsk on the 26th. The sound of sporadic artillery fire could be heard in the city’s centrally located Leninsky District well into the early hours of the 27th.

The mood among many in Donetsk—noncombatants as well as rebel fighters who comprise what is known as the Army of Novorossiya—indicates little interest in a rapprochement with Kiev. This is, given the conditions of the city after nearly a full year of war, rather understandable. Many bitterly complain of Kiev’s chosen moniker for the military campaign it   is waging against the separatist fighters, the “Anti-Terrorist Operation.” Ordinary citizens and combatants alike view it as an attempt to dehumanize them as a whole by grouping the entire population of the region in with likes of ISIS.

Interactions with several rebel rank-and-files and a briefing from two rebel officers reveal even less of an appetite for a way back into the Ukrainian fold. As one senior officer put it: “Ukraine is dead. It was killed on May 2 in Odessa.” Questions regarding Russian involvement were met with scoffs—though one did admit that “[their] Russian brothers” did provide food supplies to the area.

This is not to say Russia’s support to the rebels is limited to nonlethal aid, just that it was quite obvious that all involved would be loath to admit it. In any event, despite repeated accusations of Russian malfeasance by Washington and Brussels, even the Chief of Staff of Ukraine’s Armed Forces, General Viktor Muzhenko, admitted in late January that the “Ukrainian army is not fighting with the regular units of the Russian army.”

Interestingly, the rebels seem to have a similar mindset to those U.S. Congressmen who overwhelmingly voted to supply Kiev with lethal military aid last week: that the remilitarization of the conflict is simply inevitable. One rebel commander said that he expects Kiev to launch a new major offensive “within a week” and added, matter-of-factly: “We are ready.” And ready, he claims, for the long haul.

The separatist forces, according to this commander, are prepared to fight for the next five to seven years for "Russky Mir” (which he defined as “Russian culture”) to rid all Ukraine of what he called “Nazis” and “fascists.” Pressed for details, the commander said he did not wish to impose a “Russian world” on Ukraine, but rather that each province ought to hold a referendum to decide its fate, apparently in a fashion similar to the referendum that was held in Crimea. The commander claimed to have (but did not provide) intelligence showing that over $3 billion of the $5 billion tranche of IMF assistance that recently went to Kiev is being used to shore up its military. In short, it quickly became blindingly clear that these people are in no mood to settle; and the idea that Kiev will emerge victorious anytime soon after the twin military defeats it suffered at Debaltseve and at the Donetsk airport—with or without American lethal aid—borders on the preposterous.

Yet it seems that the Washington establishment's (though, interestingly, it seems not the president's) preferred policy choice is to send lethal aid to Kiev because it is believed, no doubt sincerely, that a supply of javelin anti-tank missiles will somehow increase the number of Russian fatalities to such an extent that public opinion would turn against Putin—thereby forcing him to back down.

This is nothing more than a fantasy dressed up as a strategy because it attributes little to no agency on the part of the rebel fighters or, for that matter, the area’s noncombatants. The simple, undeniable fact is that even if Russia was to be persuaded—via sanctions or via a significant uptick in military casualties—to wash its hands of the region, there is almost no chance that the indigenous military forces in the region would simply melt away. What is continuing to unfold in the Donbass—despite repeated protestations from Kiev’s representatives in Washington—is a civil war between two groups with diametrically opposed visions for the future of their country. It is a civil war that also—given that each side has enormously powerful supporters—poses a genuinely grave risk to global security.

If the ceasefire, against all odds, congeals and holds, the likely scenario that will play out for the Donbass region is that which unfolded in South Ossetia in the years following the Russo-Georgian War in 2008. And indeed that is an eventuality the People’s Republic of Donetsk is preparing for, with meetings scheduled with representatives of Abkhazia, South Ossetia and Nagorno-Karabakh for late spring.

Nevertheless, what has occurred in the Donbass since the Ukraine crisis began in earnest early last year is the slow-motion disintegration of a European country; and the prospect of putting Ukraine back together again is remote from the standpoint of March 2015. Policy makers in the United States and Europe and Russia ought to be taking further steps to negotiate a permanent and durable ceasefire that will truly stop the fighting and allow some measure of relief to come to the long-suffering civilian population of Donetsk. That they seem to be stoking the fires of this war, rather than trying to end it, is an ominous sign for the immediate future of the region.