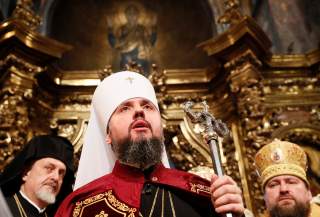 The recent presidential elections in Ukraine represent the possibility for a significant change of course in the government’s handling of the country’s nascent religious crisis. At the end of 2018, fears of a potentially-major escalation in the country’s internal conflict began to swirl around news of a schism between the Russian Orthodox Church and Constantinople over the latter’s plans to create an independent Ukrainian church. With the news of schism came statements made by former Ukrainian president Petro Poroshenko in which he announced his intention to seize major religious sites belonging to the Russian Orthodox Church’s jurisdiction in Ukraine. In particular, his statements that Kiev’s famous Pechersk Lavra would eventually be taken as part of the new church provoked a strong response from Vladimir Putin, who insisted that Russia would defend the religious freedoms of Russian Orthodox believers from persecution and foreign meddling. A scenario in which the Ukrainian government attempted to seize a site like the Pechersk Lavra, the seat of the Russian Orthodox Church within Ukraine and home to thousands of monks loyal to Kirill, the Moscow Patriarchate, would represent a serious escalation that had the potential to spiral into a much larger and more dangerous conflict.

The Ecumenical Patriarch of Constantinople, traditionally understood as the “first among equals,” announced his intention to grant a tomos, an official letter, creating an autocephalous Ukrainian Orthodox church, centered in Kiev. In response, the Moscow Patriarchate, which has held jurisdiction over the canonical Ukrainian church since the seventeenth century, severed communion with Constantinople, provoking a rare schism. In December 2018, the two noncanonical Orthodox churches in Ukraine voted to merge into a single entity, the Orthodox Church of Ukraine (OCU), which was officially recognized by Constantinople in January. It remains unrecognized by the rest of the patriarchates of the Orthodox Church.

Since the creation in December of the OCU, attention has been refocused on several alarming developments that threaten a broad escalation of Russian-Ukrainian conflict. Though the Moscow Patriarchate counts in its flock less than a fifth of the country’s Orthodox believers, it controls almost twice as many parishes as the new Orthodox Church of Ukraine and retains control over the country’s most treasured religious sites. The most prized of these is the Kiev Pechersk Lavra, a monastery complex which dates to the eleventh century and is considered the most holy site in East Slavic Orthodoxy. The Lavra is also the headquarters of the Russian Orthodox Church and home to ten thousand monks of the Moscow Patriarchate. Repeated statements made by Poroshenko and leaders of the Ukrainian church that sites belonging to the Moscow Patriarchate would be seized provoked fears that the war in the Donbass could escalate into a religious war fought in the heart of the country. When asked if there were plans to seize the Lavra, Poroshenko responded that “There is a time for everything.” Vladimir Putin responded that Russia would protect the human rights of the Orthodox faithful in Ukraine, calling the entire controversy a Western-led plot to “separate to the peoples of Russia and Ukraine.”

The issue goes much deeper than recent history, concerning fundamental questions of the national identity of Russians and Ukrainians alike. At stake in the question of church independence is a claim on the legacy of the old civilization of Kievan Rus. Russian and Ukrainian historiography has diverged significantly on this question. To Russians, Moscow is the successor of the old patrimony of Kiev, which gradually shifted eastward as a result of the devastation of the Mongols. The destruction of Kiev by Batu Khan in 1240 is the primary cause for the division of the territory held by the princes of Rus and their evolution into the distinct modern ethnic groups of Russians, Belarussians, and Ukrainians.

Ukrainians, whose history has been shaped by centuries of Polish rule, developed a sense of nationhood centered around Kiev. The Muscovites similarly lay claim to Kiev as the birthplace of their civilization. Moscow’s acquisition of the church centered in Kiev in the late seventeenth century is understood by Russian historians as a reunion of the lands of Kievan Rus. For Ukrainian nationalists in the intellectual milieu of the late nineteenth and early twentieth centuries, Moscow was yet another foreign oppressor carving up the Ukrainian heartland.

After the fall of communism, when only the church of the Moscow Patriarchate was permitted, nationally-minded Ukrainians identified with two non-canonical Orthodox churches, neither of which was recognized by any other patriarchates. Each church laid a claim to be the rightful continuation of the church of Kievan Rus.

Schism, though rare, has been a part of the creation of new national churches, particularly during the liberation of Southern Europe and the Balkans from Ottoman rule. In Ukraine’s case, there was very little expression of support for clerical independence from Moscow until the events of Maidan in 2014. Soon after, top Ukrainian political strategists presented a plan for achieving political, economic, and cultural independence from Russian influence. Among their first targets was the Russian Orthodox Church, which they saw as an arm of the Kremlin’s soft power in Ukraine. Autocephaly was soon adopted by the Ukrainian Rada in 2016, when an appeal was made to Constantinople for the creation of a new church. In 2018, following a second appeal, embattled president Petro Poroshenko adopted autocephaly as a cause célèbre, undertaking a prolonged and costly effort requiring heavy investment of his political, personal, and financial capital. Poll numbers consistently demonstrated that autocephaly was a winning political issue. Only 15-20 percent of Ukrainians, depending on the polls, identify themselves with the canonical Russian Church. A plurality claimed affiliation with the two noncanonical churches, but a decisive majority indicated support for the project. Poroshenko became the face of the project, even going so far as to incorporate it into the slogan for his re-election campaign: Army, Language, Faith. At a rally marking the church unification council in December, Poroshenko promised his supporters a church “without Putin . . . without Kirill . . . A church that doesn’t pray for the Russian state and the Russian army.”

Unfortunately for Poroshenko, Ukrainian voters were concerned with broader exigencies. The first issue for voters was the intractable conflict in the Donbass region, which has resulted in tens of thousands of casualties and a massive exodus of people to Ukraine’s west and to Poland. Second on the list, according to polls, was the lagging economy. Ukraine posts some of the most consistently poor figures in Europe for growth, GDP per capita, and individual wealth. Public trust in the state is low and corruption is endemic. Moreover, the average Ukrainian, despite professing religion as a key component of Ukrainian identity, is in practice not very religious—one researcher estimated that not more than 1-2 percent of the population attends church on a weekly basis, despite over 70 percent of the population identifying themselves as Orthodox. This phenomenon is mirrored in Russia. Though Orthodoxy made great gains in reasserting itself as a cultural institution, modernity and more than seven decades of state atheism have had a significant impact on religiosity.

Poroshenko’s campaign was built on patriotic sentiment that had reached its apogee in 2014: prioritizing the Ukrainian language, building up the country’s military potential, and weakening institutions seen as arms of the Kremlin’s influence. The surge of patriotism has long since been tempered by widespread disappointment in the lack of progress Poroshenko’s government has made on the issues of greatest importance to voters. Moreover, perception of corruption remains as high as ever, which is why Poroshenko’s overtures to national identity and patriotism fell flat when contrasted with the campaign of his opponent, Volodymyr Zelensky.

Zelensky is an outsider in many respects. He is a comedian and television actor known for playing a man who inadvertently becomes Ukraine’s president after harnessing public frustration with a corrupt and inefficient system. Zelensky’s campaign incorporated patriotic sentiments, including prioritizing the Ukrainian language and expressing support for the tomos of autocephaly, but he treated Ukrainian nationalism with a playful irreverence that, notwithstanding several controversies, resonated with voters. His campaign was remarkably scant on policy, powered instead by his personal charisma and his broad anti-corruption message. Born into a Jewish family, Zelensky is also an outsider on the church question. He is laconic about his own religious beliefs and generally restricts religious expression to broad statements, famously responding to a Facebook comment drawing attention to his absence at Easter services by saying “Don’t look for me in Church, look for God.”

Though vague, Zelensky’s overarching message has been one of national unity. Candidate Zelensky expressed his support for the creation of the Orthodox Church of Ukraine and will be tasked with overseeing the rest of its implementation. Since winning the election he has met with representatives of Ukraine’s various confessions. The Moscow Patriarchate has received his victory positively. One representative of the church expressed the opinion that Zelensky would reduce “persecution” of Russian Orthodox faithful in Ukraine. Though scant on details, Zelensky’s outsider status seems to bode well for the way he will address the religious divide in a very divided country. He is not personally invested in the project in the way Petro Poroshenko was and thus it seems highly unlikely that he will pursue an aggressive policy against the Moscow Church. But he will still inherit the situation left by Poroshenko, which includes a number of legal issues with significant implications for foreign and domestic policy.