Ukraine's Future Is Brighter Than You Think 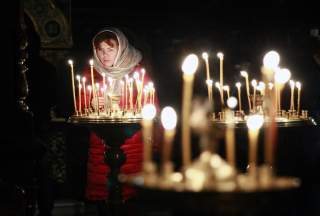 Most of the attention Ukraine gets these days is about the war in the eastern part of the country—and rightly so. More than 10,000 people have been killed in the conflict since 2014. Ukrainian soldiers are wounded or killed almost everyday. Crimea remains illegally occupied by Russia, and there seems to be no end in sight to the violence.

While Russia poses an existential threat to Ukraine, another issue of vital importance for country’s survival cannot be overlooked: the economy.

As with any nation at war, there are dire consequences for the economy. But in the case of Ukraine, the impact of the war is felt acutely. For example, when Russian-backed separatists began their illegal occupation in the highly industrialized Donbas region, Ukraine’s GDP decreased by 16 percent. In 2017, Ukraine’s Ministry of Justice assessed the economic damage of Crimea’s annexation alone to be $100 billion.

The war in the Donbas is now denying the country the economic productivity of its coal and steel industries. This problem is compounded by the fact that Ukraine’s major export market in Russia is now closed.

Trying to reform Ukraine’s governance, economy, healthcare and judiciary while fighting a war of national survival is a bit like trying to build a ship while you are already at sea—not easy. Thankfully, recent economic indicators show that Kyiv is finally heading on the right track and is expected to re-enter international markets by the end of this year. Ukraine’s finance minister, Oleksandr Danylyuk, has proven capable and has been the driving force behind many of the country’s economic reforms.

The macroeconomic situation in Ukraine is now stable. The budget deficit has been reduced, and budgetary discipline is being restored. Great efforts have been made to restructure Ukraine’s international debt.

Most importantly, Ukraine is seeing signs of economic growth. Last year, GDP grew for the first time since the war started, at 2.3 percent. This year GDP is expected to grow 2 percent, and the World Bank expects 3.5 percent growth for 2018. Ukrainian exports of metals, iron ore and grain are on the rise as well.

The key driver of these macroeconomic improvements has been Ukraine’s adherence to the International Monetary Fund’s program for the country. In the beginning, many naysayers doubted Kyiv’s ability to meet the strict demands the IMF placed on it. Despite such rigid requirements, Ukraine is making good progress.

So far, so good. Ukraine’s progress means that it has received four batches of the $17.5 billion. It has made painful reforms in line with IMF recommendations. Some of these reforms have been popular with the public, such as publicly declaring assets held by senior officials. Other reforms have been very unpopular with the public, such as increased energy tariffs.

One of the biggest challenges now is enticing direct foreign investment into the country. Located on the Black Sea in the heart of the Intermarium, and on the EU’s doorstep, Ukraine offers great geographical advantages for foreign investors and companies. The spirit and drive of the country’s youth is also promising. Up-and-coming young Ukrainians often shun Russian for English and see their future in the West, not under Moscow’s yoke.

Additionally, progress has been made with free trade. Earlier this year, a Canada-Ukraine Free Trade Agreement (CUFTA) was finalized. The Ukraine–European Union Association Agreement, which established a free trade area, is being implemented, and Ukrainians already enjoy visa free travel to most of Europe.

The United States should not allow itself to be left behind—it should pursue a free-trade agreement with Kyiv. Donald Trump has demonstrated a preference for bilateral trade agreements, and for many economic and geostrategic reasons, Ukraine is a prime candidate.

Ukraine still has a long way to go with its reforms, but the situation is not all doom and gloom, as is often reported. The country still faces many challenges on the political, economic and security fronts. But it is about time we start measuring Kyiv’s success by its actual progress and not by unrealistic expectations.

Ukraine finally appears to be heading in the right direction, and the Euro-Atlantic community should do all that it can to keep them on this path.

Luke Coffey is Director of the Douglas and Sarah Allison Center for Foreign Policy at The Heritage Foundation.

Image: A woman attends a religious service at a church in Kiev February 23, 2014. Ukraine's new rulers, just 24 hours after ousting President Viktor Yanukovich, began speedily to unstitch his power structure on Sunday, appointing a provisional leader to replace him and sacking his key ministers. REUTERS/David Mdzinarishvili.