Ukrainian Refugees and Europe: A Marathon, Not a Sprint 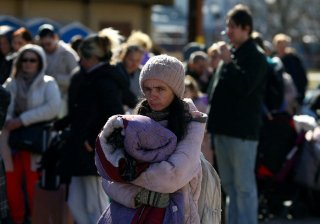 As the United States pledges to take in 100,000 Ukrainians fleeing war and send $1 billion in aid to help the European refugee effort, the immense shadow of a protracted humanitarian crisis looms over the European Union (EU).

In recent weeks, the Russian invasion of Ukraine unleashed a deluge of refugees upon Europe the size of which is comparable only to the massive displacement of people at the end of World War II. At the beginning of the armed conflict, the United Nations High Commissioner for Refugees (UNHCR) estimated that up to 4 million people might flee the embattled country, however, this initial projection was surpassed in a mere month—with no end in sight. To put 4 million refugees in context: this is the number of first-time asylum applications filed to the EU between 2016 and 2021.

Shortly after Russian bombs started falling on Ukrainian cities, a decisive and unified European response swiftly emerged based on an immense wave of solidarity that seemingly engulfed every nation in the EU. Frontier countries—Poland, Slovakia, Hungary, and Romania—opened their borders with a warm welcome, while governments, NGOs, as well as private citizens, acted in concert to pool every available resource to alleviate the suffering of Ukrainian refugees. A united EU fired broadside after broadside of sanctions at the Russian economy and elite; in addition, the twenty-seven member-states triggered the Temporary Protection Directive with a unanimous vote that gives temporary residence status to Ukrainians in the Union.

However, initial crisis management was made much easier by the means as well as the attitude of the first wave of Ukrainian refugees. Since the start of the Russian aggression, the Budapest-based Migration Research Institute (MRI) conducted a series of interviews with refugees arriving to Hungary, and it turned out that a large number of them crossed into the EU with a clear “action-plan.” Using their sometimes not-that-modest resources, they slowly made their way to relatives or friends already residing in the EU who would help them organize their “temporary” life outside of Ukraine. Consequently, a large number of them didn’t really need to rely heavily on government- or NGO-provided shelter, food, or medical supplies. Initially considering their stay in the EU as a transitory situation that would only last for weeks also made them reluctant to seek help through official channels.

However, a quick end to the war, and consequently a speedy return of refugees to Ukraine, seems more and more improbable. The quasi-stalemate in fighting, the increased Russian bombardment of civilian targets, the intensifying combat in urban centers, as well as inconclusive peace talks all point toward a protracted armed conflict that would hurl millions more westwards. Filippo Grandi, the UNHCR, recently warned that Russian occupation of Kyiv as well as the extension of the carnage to western Ukraine could result in a second wave of refugees, this time a more vulnerable lot, lacking resources or foreign contacts to rely on. Currently, there are approximately 6.5 million internally displaced persons in Ukraine who might eventually decide to cross international borders and become refugees, if Grandi’s dire predictions prove to be accurate.

After the “yes we can” optimism of the first weeks, ominous articles are starting to pop up about insufficient capacity in frontier countries: Polish stadiums and Czech reception centers, for example, are being overwhelmed by Ukrainians looking for shelter. As more and more vulnerable groups are arriving, those already here are running out of their resources and are slowly realizing that their stay is going to last longer than a few weeks. With pressure steeply mounting on government-provided services for refugees, and with crisis-fatigue setting in, Europe is slowly realizing that the Ukrainian refugee crisis is a marathon that the EU has tried to sprint its way through.

Preparing for a prolonged stay of refugees—who will have to be integrated—the EU recently proposed to reallocate $3.74 billion for housing, education, employment, and healthcare for Ukrainians, with national governments following suit one by one. Hungary, for example, recently proposed to provide additional funding for public schools taking in Ukrainian children, as well as to subsidize accommodation expenditures for refugees. Similar measures across the EU, coupled with extra strain on the union’s universal healthcare systems, will cost billions and billions more for national budgets if hundreds of thousands of Ukrainians will have to be integrated.

One thing is clear: this marathon can only be won with EU-wide solidarity towards the most affected member states—Germany, Czechia, Poland, Hungary, and Romania—as well as transatlantic burden-sharing based on our common values and principles. The $1 billion pledged by President Joe Biden might just be the first in a series of aid packages.

Viktor Marsai is the Research Director of the Budapest-based Migration Research Institute.

Kristof Gyorgy Veres is the Andrassy National Security Fellow at the Center for Immigration Studies as well as Senior Researcher at the Budapest-based Migration Research Institute.