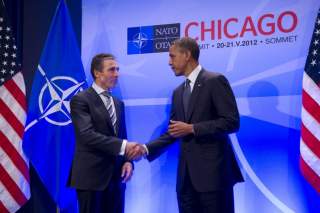 When the process of enlarging the North Atlantic Treaty Organization (NATO) began in the mid-1990s there was considerable discussion at the elite level in Washington, D.C. However, the American public was not broadly engaged and the process was framed before the U.S. Senate as a benign spreading of democracy and stability building. Hard discussions of security guarantees, costs, and potential risks were not generally aired or were downplayed by advocates. Yet recently, Secretary of State John Kerry said that, in the context of the Russia-Ukraine crisis: “NATO territory is inviolable. We will defend every piece of it.” Interestingly, that is a greater commitment than even the NATO treaty makes—as it obliges allies to consider an attack on one as if it were an attack on all, and to consult on appropriate responses with “such actions as it deems necessary, including the use of armed force, to restore and maintain the security of the North Atlantic area.” Consequently, Americans might reasonably be wondering just how all this came about.

Today, early opponents of NATO enlargement understandably claim vindication as they have long predicted an eventual backlash from Russia. Supporters of NATO enlargement also feel vindicated, because they have long seen the process as an idealist vision of a new Europe—at least for those countries that joined the alliance. Some advocates even argue that Russia should understand its interests as having benefited from the policy.

NATO is faced with a serious crisis—would the American public or the European allies really risk war with a nuclear Russia to defend the Baltic countries? New NATO allies in particular are asking this question and thus seeking reassurances because NATO’s policy for defense is one of reinforcement in a crisis, not permanent forward deterrence as it was during the Cold War. It could be said that if the question of collective defense now has to be asked, then the general approach of NATO enlargement (which was always premised on not building new dividing lines in Europe) was not exactly a shining success. Still, these countries are NATO members today and America and its allies are sending appropriate messages of reassurance with small, but symbolic, rotational exercises on their territory.

The NATO members further from the eastern frontier also understand that there is a need to avoid handing unnecessary additional pretexts to the narrative of Vladimir Putin that his illegal actions are somehow justified by NATO enlargement. They are not. However, they rightly appear to conclude that how NATO is seen in Russia is also a real part of this crisis. Enlargement advocate’s failure to understand that does not bode well for a successful “de-escalation” which is the stated U.S. and NATO goal towards Russia and Ukraine. This will be a difficult turn for enlargement advocates to make as they have been driving the NATO agenda for two decades in Washington, D.C. and Brussels and will not be keen to close the “open door”.

The central problem with NATO enlargement was not so much the first round (Poland, Hungary, and the Czech Republic)—but rather a consequent logic of an “open door” that came with it. Enlargement advocates can rightly point out that the second round—to include the three Baltic countries along with Slovenia, Romania and Bulgaria—also did not have as dramatic an impact on Russia as many opponents feared it would. However, the open door approach emphasized principles and idealism rather than hard geographic and military foundations. The process thus inevitably put NATO activity deep into Russia’s long-stated areas of vital interests (as Moscow saw it) and was, thus, eventually destabilizing. Many advocates of enlargement underestimated, and continue to misunderstand the strategic implications of their “open door” agenda for NATO—culminating in a dangerous 2008 declaration from NATO that Ukraine and Georgia would eventually join the alliance.

Enlargement advocates rightly point to successes among the countries that joined the alliance—though European Union aspirations were more important in the larger scheme of things. This can be true for NATO, but at the same time ignore the structural effects that the process had outside of the alliance. Russian officials from the most liberal reformers to the most virulent nationalists were united in their concerns about the implications of NATO enlargement. Boris Yeltsin once warned that it would lead to the flame of war spreading through Europe and said in December 1994:

A system of blocs, that is to say something we have left behind, is now coming back—the NATO bloc on the one hand—and Russia on the other…Without compromise on this issue between NATO and Russia, there would be no point in continuing a partnership…Otherwise we will go our own ways, and why have a partnership at all?

Yeltsin warned that the eventual outcome would be a “Cold Peace” and his Western-leaning Foreign Minister, Andrei Kozyrev subsequently warned of the “risk of creating new lines of division” and declared that the “honeymoon has come to an end.” He said of NATO enlargement: “We continue to believe that it does not meet either the interests of Russia’s national security or the interests of European security as a whole.”

Former Secretary of Defense Robert Gates now gives voice to the many critics who were marginalized in NATO circles as the process unfolded. In his new memoir, Gates writes:

“Getting Gorbachev to acquiesce to a unified Germany as a member of NATO had been a huge accomplishment. But moving so quickly after the collapse of the Soviet Union to incorporate so many of its formerly subjugated states into NATO was a mistake. Quickly including the Baltic states, Poland, Czechoslovakia, and Hungary was the right thing to do, but I believe the process should then have slowed…Trying to bring Georgia and Ukraine into NATO was truly overreaching. The roots of the Russian Empire trace back to Kiev in the ninth century, so that was an especially monumental provocation. Were the Europeans, much less the Americans, willing to send their sons and daughters to defend Ukraine or Georgia? Hardly....NATO expansion was a political act, not a carefully considered military commitment, thus undermining the purpose of the alliance and recklessly ignoring what the Russians considered their own vital national interests.”

As NATO enlarged, Russia was offered a range of opportunities to engage—via the NATO-Russia Founding Act, promises not to expand permanent, allied military presence in new member states, joining the G-8, and participating in European missile defense architectures. Russia consistently failed to take up these opportunities effectively and has its own leaders to blame for that. However, despite the organization’s best efforts, Russians genuinely no longer trust NATO—and this is not just a Putin problem—it is a view widely held in the country. Russians were continually told that as NATO was purely a defensive alliance, it would not threaten anyone. Yet just days after the first round was completed in 1999, the Russians saw NATO commence its air war against their long-time friends the Serbs. NATO was fighting for a humanitarian mission and to promote stability in the Balkans. But the Russian position hardened then as they saw declarations of intent and missions for the alliance evolving beyond earlier promises—exacerbated further by NATO’s 2011 war in Libya.

Over time, Russia came to see its protestations regularly dismissed—effectively being lectured that if they would just define their interests like NATO told them they should, all would be fine. For example, Russian concerns over the American decision to deploy ballistic-missile defense systems in Poland and the Czech Republic were described by a NATO Secretary General as “pathetic rhetoric” and by then U.S. Secretary of State Condoleezza Rice as a position that “borders on the bizarre.” Multiple American administrations led the charge on NATO enlargement while failing to consider that we were doing things deep in the backyard of a nuclear armed and increasingly nationalistic Russia that the United States would never for a minute tolerate in its own.

The real problem came in 2008 when the United States pushed hard within NATO for invitations to negotiate a “Membership Action Plan” for Ukraine and Georgia to begin the process of entering NATO. The European allies expressed little interest and thus the approach failed. As a compromise, the United States gained shallow agreement for a NATO declaration that at (an unstated future time), Ukraine and Georgia “will become members of NATO.” This was a dangerous and irresponsible false promise as there was no agreement in NATO to actually do this. In Ukraine, popular support for NATO membership was scant. Several months later Russia invaded Georgia; negotiations on sanctions over Iran’s nuclear program were deeply complicated; pro-Moscow reformers in Ukraine consolidated their position; and Putin commenced on a sustained campaign to heighten long-standing Russian fears of NATO to help consolidate his power at home. Ukraine subsequently withdrew its NATO application and opted for a formal declaration of neutrality.

Today, Russia has put its deeply troubling foot down on eastern Ukraine to make clear its point that it would not tolerate a Ukraine that is a future NATO member or even an aspirant to be one. To be fair, Ukrainian membership has not been on NATO’s agenda in the last several years—which is in itself a tacit recognition that the 2008 declaration caused serious damage to the stated goals of NATO enlargement. However, there is no way to understand today’s crisis in Ukraine without factoring for the difficult spot that the NATO alliance is now in due to its expansive open door policy. The dilution of the enlargement process away from geographic and military foundations into an idealistic open door is raising questions about the credibility of NATO’s collective defense commitments and is thus provoking concerns among new NATO members as to the validity of security guarantees. If these security commitments need to be further reinforced, however, this will simultaneously risk increased tensions with Russia given how it perceives NATO’s role in Europe today. Opponents and some supporters of enlargement recognized the dangers of this scenario at the beginning of the process. The fact that this dilemma exists now is evidence of serious failures of strategic thinking that guided the open door process of NATO enlargement.