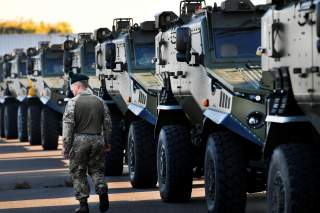 Lately, a lot of ink has been spilled on the issues of uneven burden-sharing within the North Atlantic Treaty Organization and the fact that European member-states of the Alliance are underperforming in military capability development. Although these topics have been at the top of the Donald Trump’s NATO policy ever since he assumed the presidency, they have a much longer pedigree—dating back to the Barack Obama and George W. Bush administrations, and even to the early days of the Cold War.

That fact of the matter is that the United States has guaranteed European security through its massive military power ever since the inception of the Cold War. For decades, many European states have had the luxury of free-riding at the expense of Uncle Sam. During much of the post–Cold War era—between 1989 and 2013— this dire situation had few security-related consequences. Prior to the Russian annexation of the Crimean peninsula in 2014, NATO-Europe witnessed twenty-five years of an extremely benign security environment with zero existential threats to be countered or even imagined.

During this period, the loss of European military capability had little effect—it was sufficient for Europeans to send token troop contributions to different military operations the United States was leading whether in Bosnia, Kosovo, Afghanistan, Iraq or Libya. In the last case, the United States tried to lead from behind, but was forced to prop up the attacking coalition against Muammar el-Qaddafi as European ability to conduct a prolonged operation was in doubt and European armories were depleted of precision-guided munitions soon after the beginning of the air campaign.

By the time of Russian aggression in the Crimean peninsula, the combined military spending of NATO’s European member-states had declined 20 percent when compared to the military spending at the end of the Cold War. At first glance, 20 percent is not that much. But this number does not address the real problem: between the end of the Cold War and 2014, NATO enlargement had brought twelve new member states to the Alliance, all in Europe.

What could be worse than states not spending sufficiently on their militaries when faced with rising military tensions and a potential war in Europe? The biggest problem for NATO today is the fact that many—if not the most—politicians in the European member states of the Alliance do not recognize, or take seriously, the “old-fashioned” military threats to territorial integrity of sovereign states.

NATO and many of its European member-states have lost focus during the last twenty-five years. Absent military threats to crystallize the raison d’être of NATO between 1989-2014, a whole new generation of Europeans have become accustomed to the situation where militaries do mostly constabulary duties. These include military crisis management, anti-piracy operations, countering terrorism. suppressing insurgencies and solving migration problems. In some cases, warfare has been about the destruction of adversaries with precision-guided munitions from afar. Regardless, much of the military know-how, ethos, and capability have been lost in Europe since the early 1990s.

Twenty-five years of “the peace dividend” and active management of low-end security issues out-of-area with small all-volunteer military forces have taken its toll. Many European leaders, politicians, and citizens today lack a vocabulary and the analytical tools needed to understand military threats and to devise policies for deterrence and territorial defense, not to mention the conduct of maneuver operations.

Today NATO’s agenda is so crowded with gender issues, terrorism, violent extremism, hybrid threats, energy security, information threats, and cyber issues that the reintroduction of the language related to existential military threats, deterrence, and defense is almost a fool’s errand. And even if bringing defense back into the vocabulary of NATO-Europe would be successful, the question of withered military capabilities would demand a long-term project to rebuild military capability in Europe. This is not in sight, unfortunately. NATO member-states’ defense spending is rising surprisingly slowly.

NATO has truly changed over the last quarter century. This change started with the effort to save the alliance from extinction in the early 1990s. Going out-of-area rather than out-of-business was the desired policy in the United States, Canada and in much of Europe of the early 1990s. However, revolution devours its own children. What started as a project to save NATO and many of its member-states’ militaries from extinction, has turned into a process with a logic of its own.

The new raison d’être of NATO—and that of its European member states’ militaries—have escaped its creators who in the early 1990s were trying to cope with the monumental changes in the international-security environment. Throughout the post–Cold War years, in a gradual process, NATO has turned into a more transactional arrangement. And at the same time European militaries have turned into much smaller forces that have preached Article 5, but in most cases in name only.

Although president Trump has been blamed for looking at NATO from a transactional perspective, most European states have done so for years—even for a couple of decades. This what’s-in-it-for-me attitude was able to develop and foster under the years of zero military threats to Europe. Sending token forces to Afghanistan was acceptable as long as the required troop numbers were low. Troop contributions to Afghanistan were seen as a “membership fee,” which was needed to be paid, but the lower the fee, the better. Participation in the American-led war was mostly not about Afghanistan—it was about having a national flag in the troop placemat. Participation was important but the success of the operation not so much.

During the post–Cold War years, NATO’s European member-states have been ready to talk the talk—but not walk the walk. The Defence Capabilities Initiative, the Prague Capabilities Commitment, the Connected Forces Initiative and smart defense are good examples that. Hardly anything militarily significant came out of these—or other—initiatives, roadmaps, commitments or action plans.

Today there is a lot of tough talk in Europe about Russia and Article 5. This is natural. After twenty-five years of underperforming in the field of defense, much of Europe lacks credible military capability for deterrence and defense. Everyone in Europe realizes this—all the statesmen at least. Thus, a lack of knowledge of the dire situation of NATO’s European military capabilities is not the problem.

The real problem is that the NATO of twenty-nine member-states does not have a meaningful shared threat perception about military threats that a military alliance should have. Today NATO is stuck with the 360-degree approach, although most of that perspective (270 degrees I would argue) has practically nothing to do with military defense. If anything, wars in Afghanistan, Iraq, and Libya should have taught that active military management of “new threats” around the world is a task that Western militaries cannot perform in any meaningful way. Deterrence and defense would be suitable tasks for European militaries and for NATO, but still today there seems to be little appetite for them in Europe. Thus, the burden-sharing drama in the latest NATO summit in Brussels is but a symptom of a more profound problem—the lack of collective military purpose within an Alliance that has become transactional.