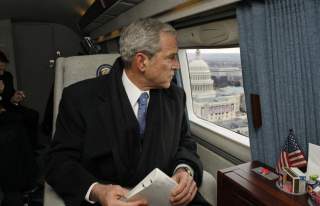 Leaving nomination politics aside, if the question is whether the new George W. Bush administration could have done more to prevent the 9/11 attacks, the answer is clearly yes.  That judgment is based on my experience as co-chair, with the late Senator Warren Rudman, of the U.S. Commission on National Security/21st Century.

Our Commission, empaneled in October 1998, was given a mandate to report to the next President on new realities, both threats and opportunities, affecting U.S. national security in the first quarter of the 21st century. It was the most comprehensive review of our national security since the passage of the National Security Act of 1947.

We concluded as early as 1999, in an interim report, that “America will be attacked by terrorists using weapons of mass destruction, and Americans will die, possibly in large numbers, on American soil.”  That conclusion was based on briefings by terrorism experts including Richard Clarke, then still in the White House as an advisor.

Mr. Clarke later testified that his efforts to alert the new Administration to the domestic terrorist dangers were brushed aside by senior White House officials, including Paul Wolfowitz, already fixated on Iraq.

Our final report on January 31, 2001, strongly recommended that the new Bush administration create a new Department of Homeland Security to consolidate Customs, Border Patrol, and the Coast Guard—the three agencies responsible for securing our borders—into a single cabinet Department responsible to the President and accountable to the American people. We did so because we found that these three agencies did not possess a common database or common communications system.

The failure of the Bush administration to act on this recommendation, as well as a more detailed warning by the CIA, proved fatal eight months later. Though our original mandate was to report to the next President of the United States, whomever that might be, the new President and Vice President chose not to see us or receive our report. We did brief the incoming Secretary of State, Colin Powell, the new Secretary of Defense, Donald Rumsfeld, and the new National Security Advisor, Condoleezza Rice.

Our Commission dissolved in February 2001, but one or two of us continued to sound the alarm. In my case I gave one of several speeches,ironically to the International Air Transportation Association in Montreal, and then proceeded to Washington to meet with Dr. Rice to warn her once again that serious danger lurked. The Montreal papers that morning headlined: “Hart Warns of Terrorist Attacks on America.”  The date was September 6, 2001, five days before 9/11.