The United Nations Is Having a Very Bad Year 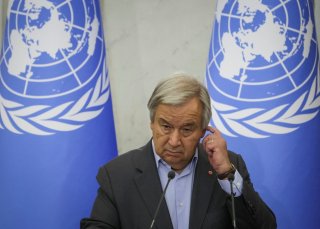 As world leaders gather in New York for the seventy-seventh United Nations (UN) General Assembly, the global body has never been more divided, challenged, or starved for leadership. Fundamental reforms promised since Secretary-General Antonio Guterres’ first term, have been absent. The Sustainable Development Goals (SDGs) are failing, the UN Human Rights Office has arguably bent to the will of China, and humanitarian and climate change-related emergencies are overwhelming UN agencies.

Russia’s brutal invasion of Ukraine reminded member states of dysfunction in the Security Council, as Russia vetoed a resolution that would have mandated that it immediately halt its attack and withdraw all troops, with China, India, and the United Arab Emirates abstaining. Only the five permanent members have veto power in the Security Council, which includes Russia, China, the United States, and the United Kingdom. It took non-binding resolutions from the more democratic General Assembly on March 2 where 141 countries voted to reaffirm Ukrainian sovereignty and territorial integrity, while the other, put forward by Ukraine on March 24,  demanded an immediate end to the war. Both votes highlighted significant divides among member states, with as many as thirty-eight abstaining to avoid conflicts with either Russia or China.

On the humanitarian front, the UN is reeling. The lone victory this year was a Turkish-backed diplomatic mission to Moscow to negotiate a humanitarian corridor for civilians that were trapped in the Ukrainian city of Mariupol and the exportation of critical food staples out of the Black Sea region. However, less than twenty-four hours after signing the deal, explosions hit Odessa, a critical port city. Moscow argued that it did not violate the agreement since the strikes did not hit targets directly used for grain exports. While humanitarian assistance to Ukraine has been more than half met, other appeals have reached critical levels of underfunding, a trend that dates back to the Syrian conflict in 2011.

The UN is faced with a $32 billion shortfall in humanitarian aid and has been forced to dip into a reserve fund to support critical program areas in eleven countries. Donor support is high due to multiple crises, natural or man-made, but the need is high. The United Nations Office for the Coordination of Humanitarian Affairs (UNOCHA) recently withdrew $100 million from the fund, with a total of $250 million coming out in 2022 alone. UN-coordinated humanitarian appeals represent the largest requests for assistance. In 2017, the total requirement was $25.2 billion, double that of the previous five years. In comparison to 2022, the funding gap was just under $11 billion.

Adding onto humanitarian and security-related catastrophes comes additional evidence that the UN’s signature SDGs, a set of seventeen goals with 169 different targets, are failing. The data has been piling up for years. The 2021 and 2022 SDGs Reports both show uneven, or even reversals of, progress. In 2017, The Lancet medical journal published a study showing that more than thirty-five health-related indicators for many developing and middle-income countries were off track, including those for obesity, tuberculosis, and road injury mortality. Projections for attainment by 2030 were slim. In June 2022, an assessment published in Nature Sustainability, which included several authors from Utrecht University in the Netherlands, showed that the “Global Goals”, as they are otherwise known, are having limited impact. Further, more than seven years after their inception, there is little evidence that they are contributing at all to reducing global challenges, such as climate change, economic and social inequalities, and the protection of biodiversity, which many see as the largest concern of all. The Post-2015 Development Agenda, which helped shape the SDGs prior to the expiration of the Millennium Development Goals, was supposed to kickstart a citizen-driven, bottom-up approach to human development. But the evidence now shows that governments are using the SDGs for their own purposes through selective interpretation and implementation. Already off track due to the Covid-19 pandemic and the consequences of disruptions caused by climate change-related disasters in Pakistan and the Sahel region of Africa, as well as global food disruptions due to the ongoing war in Ukraine, there is little reason to suggest that in the next few years that the SDGs will make significant progress.

Human rights advocacy under Guterres has gone quiet, evidenced recently by former UN Human Rights Chief Michelle Bachelet’s long-delayed report on Xi Jinping’s policy toward ethnic Uyghur Muslims in the Xinjiang region of northwest China. Since 2017, civil society groups and human rights organizations have gathered evidence of forced sterilization, mass detainment in re-education camps, and the wider and more politically charged accusation of cultural genocide. Bachelet and Guterres sat silent as other options were recommended by many prominent human rights experts, including the appointment of a Special Rapporteur or a UN special envoy. Bachelet’s visit to China this past May was an epic failure, with accusations she was feeding Xi’s propaganda. On her visit, Bachelet was recorded using Chinese terminology by describing internment camps as educational and vocational training centers. And with just minutes left in her tenure as High Commissioner, Bachelet released the report, which contained language favorable to Beijing.

Compounding the human rights challenges facing the UN is that in many places, including Myanmar, the organs responsible for peace, security, and human rights have been absent or silent. Civil society organizations in Myanmar have long called for the Security Council to respond to the violence that upended the democratically-elected government, as well as for more aggressive actions such as a no-fly zone or an arms embargo. Except for condemning the executions of pro-democracy activists in late July, the Security Council has done little to address the violence in the country. Instead, diplomacy has been left largely to the Association of Southeast Asian Nations (ASEAN), whose Five Point Consensus has failed to bring about any meaningful change.

Now as heads of state arrive, some are pushing for reforming the Security Council, an idea that has been floated many times in the past, with a sea of proposals from both the West and the East. Because of anti-Russian sentiment, the United States has taken up the issue, in conjunction with its support of Ukraine and without the presence of Xi or Putin. The issue dates back decades as Japan sought a Security Council seat after years of prestige and status-seeking through official development assistance (ODA), contributions to diplomacy and peace efforts in Cambodia, and rigid support for the reintegration of combatants in Afghanistan. Because of China’s veto, Japan remains where it is. Since then, proposals have been varied. Some want the Council to be more representative of the African and Asian continents, while France has proposed that vetoes be canceled when it prevents action from ending crises or preventing mass atrocities.

But reform doesn’t come easy. And with the United Nations so feverishly divided, the prospects for much-needed reforms look more like diplomatic theater than an opportunity for change. With so many issues polarizing UN member states, the organization remains in crisis. This year provided additional evidence of an institution in decline as a result of varied interests and the consequences of failed leadership.

Mark S. Cogan is an associate professor of peace and conflict studies at Kansai Gaidai University based in Osaka, Japan, and a former communications specialist with the United Nations.