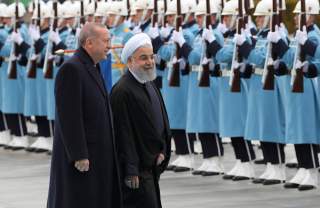 The United States has increased its pressure on Iran to an unprecedented level by designating Iran's Revolutionary Guard Corps (IRGC) a terrorist organization, and by not extending the waivers for importing Iranian oil. Some saber rattling has also accompanied the tightening sanctions as well. This U.S. policy has the full support of U.S. allies in the Middle East, except for its only NATO ally in the region. Although the United States has made important moves toward isolating Iran, escalating tensions between the United States and Turkey can undermine those efforts.

The U.S.-Turkey alliance has been stuck in unremitting decline and deadlock in recent years. Turkey's increasing authoritarian turn is diverging it from the United States for the most part. Turkey brought down even the thin facade of democracy by annulling the recent election in Istanbul that was won by the opposition. Turkey’s decision to leaving the league of democracy while maintaining its traditional alliance with the United States and the West, in general, is a thorny dilemma; Ankara’s acquisition of the S-400s and other crises are the ramifications of changing priorities and values.

Yet when it comes to Iran, Turkey has ineluctable strategic concerns regardless of its increasing authoritarianism. The war in Syria has exhausted Turkey’s resources and debilitated its borders. Any prospect of instability in Iran is Turkey’s worst nightmare as Turkey already hosts 3.6 million Syrian refugees. When Iran threatened Europe with expelling three million Afghan refugees in response to U.S. sanctions, it was Turkey, rather than Europe, who was appalled by the notion. Diverting military resources to its border with Iran, hosting extra refugees of Afghan and possibly Iranian nationality, fighting drug flows, and increasing terrorist threats will present Turkey with grave security risks, draining its ailing economy and helping destabilize the country.

If the United States cannot pacify its relations with Turkey and incentivize Turkish cooperation by eliminating the adverse effects of the Iran sanctions on the Turkish economy, then Ankara can work with Tehran to undermine the latter’s isolation. Turkey’s rapprochement with Iran would create breathing space for Iranian economy, increase the U.S. security burden in the region, and cripple the soft power of the United States and its allies.

High-level bilateral visits between Turkey and Iran have increased in recent weeks and the two countries are trying to find common ground in which Turkey helps Iran overcome the consequences of U.S. sanctions and, in turn, Iran uses its influence in Syria to alleviate Turkey’s concerns. The fact that Iran yielded approximately U.S. $20 billion from Turkish involvement in the biggest sanctions evasion scheme in recent history gives an idea of how effectively can Turkey help Iran avoid U.S. sanctions.

If any power, foreign or regional, should devise a grand strategy for the Middle East, then it should include some inspiration from the Schlieffen Plan in the sense of avoiding a forcible counteraction, and adopt a doctrine of “do not confront Turkey and Iran at the same time.” Only Turkey and Iran can balance each other in Iraq and Syria as regional powers and if they align it would be very hard to limit their combined influence. Removing Turkey from being a balancer and trying to isolate Iran is not a smart move. One can justifiably argue that Turkey has already lost much of its influence in Iraq and Syria. But Turkey still has many instruments such as its military presence in Syria, close economic ties with Northern Iraq and capacity to support or disable some asymmetrical groups by means of its geography. Turkey’s sheer size and dynamism provide it with an appreciable potential for regional influence even if it has sunk in suffocating problems at the moment.

The main difference between Turkey and the other U.S. allies in the region, when we neglect subtle exceptions for the sake of a generalization, is that Turkey is the only ally that can share the burden of security. Other U.S. allies, Saudi Arabia, the Arab Gulf Countries and even Israel, mostly depend on the United States when it comes to security matters. An illustrating example is that when President Donald Trump wanted to pullout from Syria, he wanted leaving the task of finishing off ISIS to Turkey. It would be implausible to consider other U.S. allies to be nominated for such a task in the absence of any U.S. involvement.

Iran’s regional strategy is a combination of wide ranging, interrelated tools interrelated in which soft power is an important component. The U.S. recognition of Jerusalem as the capital of Israel and the recognition of Israeli sovereignty over the Golan Heights were a significant blow to the legitimacy of Washington’s regional Arab allies which will have to carry the burden of the “betrayal to the Palestinian cause.” President Trump’s push for designating the Muslim Brotherhood as a terrorist organization will add more fuel to the alienation of the Middle Eastern masses from their U.S.-allied governments. The Brotherhood does not meet the legal criteria for being branded as terrorist and such a move will complicate the United States’ relations with many countries in the region that host legitimate political parties and movements affiliated with the Brotherhood.

Turkey has been an active supporter of the Muslim Brotherhood since the outbreak of the Arab Spring and Istanbul has become a hub for Arab dissidents from where they operate media outlets against their governments. Saudi Arabia and the UAE designated the Brotherhood as a terrorist organization in 2014. Turkey’s support would provide the movement, that has already found a haven in Turkey, with opportunities for a strong opposition.

Sponsoring Shia sectarianism is an important chapter in Iran’s playbook. When Iran’s efforts for fomenting Shia unrest are accompanied by Turkey’s backing of the Muslim Brotherhood, Saudi Arabia and the UAE would fall under disruptive pressure. The vicious circle of countering the increasing opposition with harsh oppression would lead to more discontent among their population and also incite anti-American sentiment.

Given that Europe is not eager to lend strong support for the U.S. sanctions and Russia and China will push to thwart them, the United States will have to exert significant pressure on Iran. Any escalation with Iran will also deepen the dependence of U.S. regional allies on Washington and they will use all their significant lobbying power to obtain more U.S. involvement in the region. Turkey’s support for Iran can further complicate the efforts of the United States to cope with the absence of an international coalition against Iran and the pressure from its demanding regional allies.

Muhammed Bahadır Gülle is a former Turkish diplomat and a visiting scholar at the University of Cologne. Follow him on Twitter @BahadGulle.