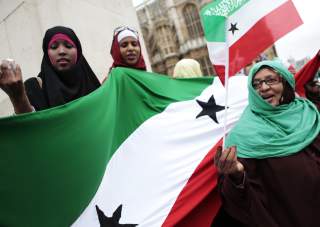 What does the United States have to show for these billions of dollars? Not much. Somalia remains the most corrupt country on the planet and the Al Qaeda affiliate, al-Shabaab, is yet again resurgent. The well-funded government of Somalia’s President Mohamed Abdullahi Mohamed, better known as Farmaajo, has consistent control over little more than the presidential palace.

However, in the as yet unrecognized Republic of Somaliland, the situation is very different. Somaliland, a former British Protectorate located in the northernmost part of what was Somalia, declared its independence from Somalia in 1991. Somaliland subsequently formed a government, drafted a constitution, has held parliamentary elections, and has elected three presidents. Despite relatively little aid and no access to international loans, Somaliland has done everything that Somalia has failed to do. It has a functioning government that provides security and some services. Somaliland’s capital, Hargeisa, is probably the safest capital city in Africa, where even petty crime is infrequent. Most notably, al-Shabaab has, at least until now, found it difficult to establish itself in Somaliland.

How did Somaliland achieve this when Somalia has consistently failed to provide security and stability for its citizens despite billions of dollars in international aid? This is a question I put to Somaliland’s president, Musa Bihi Abdi, in a recent interview. “The simplest answer to that question is that we have the trust of our people,” he said. “Without that trust we wouldn’t have the security that we have. The second answer is that we are doing things by ourselves, for ourselves and in our own way. We did not have a system of government imposed on us, we developed our own, a process that is still underway.”

Bihi, who was a pilot, officer, and military attaché under the regime of former Somali dictator Siad Barre, has seen war and knows its horrors. As Barre became more and more oppressive, Bihi broke with the regime and joined the Somali National Movement, which was fighting to overthrow Barre. Repression against Somaliland by the Barre regime culminated in the bombing and near complete destruction of Hargeisa, Somaliland’s largest city, a place where mass graves are still being unearthed.

“I’ve been an officer in a regular army and in our liberation army and while there are many differences, one thing remains the same: trust between you and your people is what allows you to succeed. If you don’t have the hearts and minds, as it is often called, you don’t have anything. And in Somalia, the government does not enjoy this trust.”

Indeed in Somalia, it is often al-Shabaab that enjoys the trust of the people. Al-Shabaab is a brutal organization that thinks nothing of killing civilians, using children as suicide bombers, and administering the most severe punishments. However, al-Shabaab, unlike the Somali government, is efficient, predictable, and relatively uncorrupt. This, and its formidable intelligence service, the Amniyat, are what give it the edge in much of Somalia.

“On most days al-Shabaab knows what color tie President Farmaajo is wearing,” explained a Mogadishu based security analyst. “Al-Shabaab has its informers, spies, and sympathizers in every government ministry and even in the National Intelligence and Security Agency (NISA),” explained the same analyst. “There is little al-Shabaab does not know.”

In contrast, in Somaliland, President Bihi, who is fond of driving, often drives himself when he is in the capital, albeit in an armored Land Cruiser. “Our people are what we rely on for our security, they are the foundation on which everything is built,” Bihi explained. “Yes, we have an effective police force, Rapid Response Units, and an intelligence service, but it is the people of Somaliland who tell us what we need to know. They know when someone suspicious comes into their community and they report it. Without that, even the best intelligence service and the best equipped [counterterrorism] forces would be ineffective. Nothing replaces human intelligence, and that is what we have here, a whole country of vigilant people who want to maintain what we have struggled for: stability and peace.”

However, despite Somaliland’s achievements with respect to governance and security, there are limits to what it can achieve with no international loans and very little international aid. Somaliland’s government is butting up against a wall that it cannot climb without strategic, precise, and intelligently targeted aid. Somaliland spends close to forty percent of its national budget on security, leaving little money for other equally critical areas like education and healthcare. Youth unemployment in Somaliland is over seventy-percent and, like many countries in the region, it faces a youth bulge.

“It is the young who are most vulnerable to groups like al-Shabaab,” argues Bihi. “We have to be able to invest far more in education and we have to provide them with opportunities to work.” To this end, Bihi’s administration has just deftly restructured a deal with the United Arab Emirates (UAE) which would have seen the UAE build a military base in Somaliland. Instead, the UAE has agreed to invest in the construction of a commercial hub near Somaliland’s primary port at Berbera where UAE based DP World is expanding and running port facilities.

“Yes, we want and need aid and loans,” Bihi said. “However, we also recognize that this aid can be a double edged sword. It can corrupt, just as it has in Somalia.” However, after nearly thirty years of independence and state building, Somaliland is ready for meaningful aid and assistance.

Rather than continuing to give hundreds of millions of dollars to what remains a failed state in Somalia, the United States should recognize the accomplishments of Somaliland by providing the aid and investment that it needs to maintain and build on those achievements. In Somaliland, the United States could have a real ally in the region who knows how to fight and beat militant groups like al-Shabaab while at the same time embracing many of the values that made the United States the country that it is.

Michael Horton is a fellow at the Jamestown Foundation. He is a frequent contributor to Jane’s Intelligence Review and has written for numerous other publications including: the National Interest, The Economist, West Point’s CTC Sentinel, and The American Conservative.