Unless Latin America Acts, Venezuela's Crisis Will Get Worse 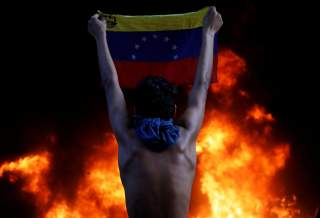 Venezuela is collapsing, and the repercussions may be forcing many Latin American countries to reevaluate their longstanding embrace of the principle of non-intervention. It is about time. New thinking on what to do about the disaster unfolding in Caracas is urgently needed.

Venezuela’s president has announced that he intends to lop five zeroes from the national currency. The International Monetary Fund is predicting inflation could reach 1,000,000 percent by the end of the year. Food and medicine are in short supply. Violent crime is out of control. The situation is astonishingly bad and will not improve if all the region and world does is proclaim its disapproval, and call on Nicolas Maduro to restore democracy and permit the distribution of international humanitarian assistance.

Since at least the establishment of the Organization of American States following the end of World War II, non-intervention has been a cornerstone of foreign policy thinking for both large and small Latin American nations.

Many Latin American countries originally embraced non-intervention out of fear of the United States and resentment of the many instances in which Washington imposed itself by diplomatic coercion or by force of arms on its weaker hemispheric neighbors. Also, while there was some cooperation with the United States and between Latin American governments during the Cold War, most of the region now looks back on that period as a dark time in which anti-communism provided a pretext for authoritarianism.

Venezuela now presents the region with a problem. The Maduro government has proven itself unable to reverse the country's economic decline and unwilling to change direction either economically or politically. Worse yet, as the Maduro administration has lost popular support, the regime has become more authoritarian. As a consequence, as many as two million or more Venezuelans have fled the country creating refugee crises in Brazil and Colombia and imposing significant burdens on many of Venezuela's other hemispheric neighbors.

The implosion of the Venezuelan oil sector, which has seen production drop from around 3.4 million barrels a day to less than 1.4 million barrels, means that the government no longer has the resources necessary to ameliorate the country’s humanitarian crisis even temporarily. Indeed, Venezuela’s energy sector has contracted, along with the rest of the economy. As a result, the Maduro regime has had to reduce or suspend the shipment of refined petroleum products to many of the countries which, over the last fifteen years, participated in Venezuela’s Petrocaribe Initiative.

Arguably recent unrest in both Haiti and Nicaragua is, in part at least, a result of financial problems resulting from the sharp decline of Venezuela's Petrocaribe program. These countries are now obliged once again to pay the full price for oil without the benefit of Venezuela's help.

All indications suggest the situation in Venezuela is going to get worse, maybe much worse, before it gets better. The Secretary General of the OAS, an ad hoc coalition of nations representing more than 90 percent of the region's population called the Lima Group, as well as a group of former Latin American presidents, have all condemned the Venezuelan government. They have also called for the restoration of political liberties, respect for human rights and permission to deliver humanitarian relief supplies.

Few countries in the region, however, have been willing to contemplate measures to compel Venezuela to comply with its obligations as a signatory to the Inter-American Democratic Charter. Although two or three have flirted with the idea of imposing financial and travel restrictions on key Venezuelan officials, most have limited themselves to criticism and expressions of concern. So far, the reaction of President Maduro and his closest associates has been a collective shrug.

The United States has imposed sanctions on several dozen prominent regime figures and also imposed some limited sanctions on Venezuela’s financial sector. These have stung the regime but not precipitated any improvement on the ground. It seems clear that the U.S. sanctions alone will not force the Maduro government to change course. Moreover, the United States is reluctant to tighten the sanction screws further out of concern for the well-being of ordinary Venezuelans.

In the meantime, most U.S. companies have already adjusted their balance sheets to account for losses in Venezuela. Most U.S. citizens have left, and U.S. oil production is booming thus diminishing further commercial ties between the two countries.

The instability in Venezuela is now far more of a threat to the region than to the United States. If Latin America wants to avoid having to deal with even most more serious repercussions in the proximate future, the region is going to have to take a new and more activist approach with this failing regime. This does not imply force and, indeed, the crisis in Venezuela is not one that would lend itself to a military solution. Nevertheless, it seems clear that non-intervention may no longer be a defensible policy option for those who worry that Venezuela’s implosion could trigger a tsunami of social and economic problems in Latin America.

Patrick Duddy served as the U.S. ambassador to Venezuela and as deputy assistant secretary of state for the western hemisphere. Now retired from the U.S. Foreign Service, he is the director of Duke University’s Center for Latin American and Caribbean Studies.

Image: A protester holds a national flag as a bank branch, housed in the magistracy of the Supreme Court of Justice, burns during a rally against Venezuela's President Nicolas Maduro, in Caracas, Venezuela June 12, 2017. REUTERS/Carlos Garcia Rawlins TPX IMAGES OF THE DAY​