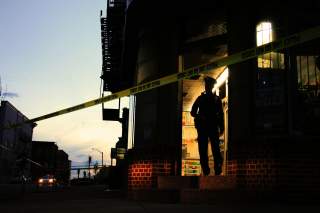 While news coverage about national security understandably focuses on issues such as the Syria and Ukraine crises, even bigger and broader forces are at work in today’s world. They are, in fact, redefining the very meaning of national security in ways that require new responses from policymakers at all levels of government. To secure our nation in this environment, we need much more than military power. Specifically, we need to ask with fresh eyes how Washington, DC can better help state and local governments in what used to be viewed as old-fashioned and largely local police work—but that should increasingly be understood as core national security policy. The United States should broaden its lens about how to secure the nation beyond military tools, and ask how the federal government can better support the work of state and local governments here in the United States.

Of all that is changing in today’s world, two forces stand out: urbanization and globalization. The first is happening gradually, but viewed over a generation, the changes are enormous. In the mid-twentieth century, there were some 2.5 billion humans on earth and a third lived in metropolitan areas. Today, there are 7.4 billion people, and 54 percent of that much larger number now live in or around cities. By 2050, there will be at least nine billion humans on Earth, of whom two-thirds will live in metropolitan areas, according to the UN. Several dozen megacities, each of ten million or more souls, will be scattered about the earth from the Americas and Africa to south Asia and east Asia.

Second, these cities are tied together in ways never previously imaginable. Global supply chains, cheaper intercontinental travel, speed-of-light communications networks and worldwide diasporas will continue to allow these cities to interact with each other far more easily. The forces are just too powerful to stop.

With these twin megatrends comes much greater prosperity for many. Yet the downsides are enormous as well, and they have national-security implications far beyond the threat posed by ISIS and Al Qaeda. While the world is becoming statistically safer for the average person from generation to generation, the character of crime is changing—and internationalizing. To be sure, the Sicilian or Irish family syndicates, and the drug cartels reaching from South America’s Andes and the Caribbean to the streets of American cities, have been around a long time. In today’s world, however, the tentacles of transnational criminal networks reach further and wider, profiting from social media as well as other rapid means of communication and transport to make their money and settle their scores.

There is another aspect to it as well. With larger cities, all dependent on infrastructure that is often vulnerable to natural disaster or cyberattack or terrorist strikes, there is a growing potential for catastrophes so big as to have national-security repercussions. The next storm like Hurricane Katrina might hit a city of ten million, or the next massive earthquake might not be in Port-au-Prince, Haiti (as bad as that was) but a huge metropolitan area like Rio or Mexico City or Karachi. The next major typhoon to target a country like the Philippines might strike more than an indirect blow at Manila; the next Ebola outbreak may not be so quickly contained in a remote part of Africa. The next nuclear power plant disaster might require more than just planning for the evacuation of a city like Tokyo, but the actual relocation of millions of people; the next cyberattack may take down an electricity grid serving a city or a region not just for hours, but for days or weeks.

Fortunately, these broad trends provide not just scary scenarios but opportunities. Around the United States and around the world, cities are innovating in how they protect their citizens. They are talking with each other more and more about how to do it, too, rather than waiting for diplomats in their respective national capitals to have the conversations for them. Whether it be refining techniques of community policing, adopting sound methods of fighting terrorism by breaking down bureaucratic stovepipes and sharing information, creating public-private partnerships to monitor, deter and respond to crime quickly, or working hard to improve social cohesion to get at the sources of crime and extremism, there is a new global network of like-minded local officials pushing the state of the art.

This new localism needs to continue and expand. But there is a key role for federal authorities too. Washington has responded reasonably well since 9/11 in improving federal attention to counterterrorism, including with FBI-led Joint Terrorism Task Forces and other means. However, we have let key elements of federal support to state and local authorities atrophy. The Community Oriented Policing Services (COPS) has declined dramatically, for example, and now provides only a couple hundred million dollars a year to help local police forces grow their ranks when needed. Other federal initiatives are typically also measured in modest sums, such as the $500 million Office on Violence against Women. The Department of Justice’s capacities are impressive, but only a bit more than fifty thousand personnel between the FBI, Marshall Service, Drug Enforcement Administration and Bureau of Alcohol, Tobacco, Firearms and Explosives. They provide crucial but niche capabilities in the national fight against crime.

State and local police are, naturally, funded primarily at the state and local level—the nation spends more than $100 billion a year collectively on such efforts. But in regions hit hard by adverse economic trends or otherwise struggling, there could be a need for more federal help. And of course, it’s not just about the money. Washington can provide better mechanisms for sharing best practices from city to city; as noted, these communications happen now already, but they are largely dependent on specific personalities in the offices of mayors and police chiefs around the land. National doctrine and training on what works best, with cities taking the lead but the national capital providing a central focal point for discussion and cooperation, should be created and shared. Washington’s approach should not be to dictate outcomes, but to encourage those who really know what works on the ground to drive the debates and share what they have learned.

There is another aspect to the challenge as well. While the United States has, due to the hard work of many state and local officials, cut violent crime rates by two-thirds over a generation, there has been a disturbing partial reversal of this trend since roughly 2014. We need to nip this bad trend in the bud—and we need to end the acrimony that has characterized debate around this issue in recent times. A central tenet of providing urban security is this: the endeavor can only work if there is a spirit of teamwork among all key actors, including mayors, police and the communities most at risk from crime.

Since the criminal networks and other nefarious actors who prey on one city might use it to create a base from which to spread out to others, and since a sufficiently serious catastrophe in one place can affect us all, we need to view this as a matter of national priority—and national security.

Fortunately, at a time of big deficits, no huge influx of federal funds is needed. But we need a zero-based review of the country’s domestic urban security just as much as another Pentagon review of overseas threats. In fact, the whole domestic-overseas distinction is losing much of its traditional meaning in today’s world. No priority should be higher than this one for the Trump administration and the 115th Congress.

General Raymond Odierno, retired, was commander of coalition forces in Iraq from 2008–10 and chief of staff of the U.S. Army from 2011–15. He is a Senior Advisor at JPMorgan Chase. Michael O'Hanlon is a senior fellow at the Brookings Institution. Their paper “Securing Global Cities” will be released March 16.