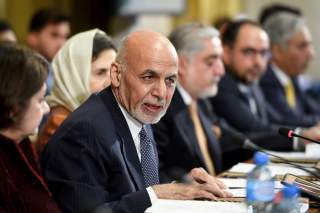 If one year ago I returned from a trip to Afghanistan more hopeful than previously, my return this time highlighted the immensity of the challenges, the dangers to our nation of retreat, and yet a few bright spots difficult to properly assess. Elections, security and peace negotiations are the themes that dominate Kabul discussions. Each is messy, with head snapping contradictions that make most simple bottom line assessments at least partially wrong.

For background on what follows: My last yearly trip was July 2017. This November I spent a week in Kabul. The impressions that follow do not represent scientific sampling but, rather, nearly forty meetings with Afghan government officials, opposition figures, businessmen, women and men active in civil society, foreign diplomats and observers as well as American civilian and military officials. Many of these are people I have known for over a decade. What follows, then, is an impressionistic synthesis of what I heard.

The parliamentary elections are past but complicated vote tallying methods mean that it will be weeks before the results will be known. Before the election the hope of most Afghans I knew was simply that they would be better than in the past. In some ways the elections were better and in others not. This was the first election that Afghan forces had to secure without foreign troop support. There was a good deal of violence, some locations were deemed too violent to try to have voting. Some polling places did not open because of threats. The Taliban made a significant effort to stop the voting through threats, bombs and mortar fire at polling stations. Yet the election went forward.

The total incidents of violence seem to have been roughly similar to the last election when over 100,000 foreign troops were helping with security. And the Afghan people voted. The turnout was in the neighborhood of 40 percent. All figures in Afghanistan are subject to dispute but if the number of votes is inflated one must also consider that many who turned out to vote went home without casting ballots due to the mismanagement of polling places. In short, the turnout was about the same as the last parliamentary election eight years ago. What is noteworthy is that this was far larger than expected. Afghan journalists, a cynical crowd, were uniform in telling me that the turnout was far larger than they expected. Several people also felt there was less fraud than previously although this impression may change as the votes are counted.

If the Afghan security services performed credibly with significant casualties to demonstrate their efforts and the people performed well and bravely, the Afghan government largely failed them. Despite four years to prepare and promises from President Ashraf Ghani and Chief Executive Officer (CEO) Dr. Abdullah Abdullah, the administration of the elections was a disaster. The administration of the Independent Election Commission was a shamble. Voting lists were missing or delivered late with citizens scrambling to find the correct polling place. No one was immune from the chaos. In Kabul, the one place where decent organization should have been possible, even CEO Dr. Abdullah had to wait half an hour for election officials to find his name on the voting list. A former governor of Kabul told me of having to go to four different locations to find his name on the voting rolls.

Despite months of controversy and discussion, the decision to deploy biometric voting devices was made late, training on them was massively inadequate, many ran out of power and some locations never received the devices. The Independent Election Commission (IEC) performed poorly, but the government, the political opposition (which demanded technical changes when they could not be properly implemented) and even the international community (which was slow to help with the biometric decision) all share in responsibility. This has now left the government and politicians grappling with a perplexing problem. If those ballots taken with the biometric devices are counted the results will be more honest, but many genuine voters will be disenfranchised. If ballots taken without the machines are counted, the right of citizens to vote will be better respected but the opportunities for fraud will greatly expand as will disputes over the results.

The two principles espoused by democracy advocates—the right of people to have their vote counted and the importance of a transparent result—are now in conflict. Yet even in this chaos there are some, small positive notes; several younger candidates, despite knowing that they may well be disadvantaged, told one UN official that only the biometrically taken ballots should be counted. The others should be “martyred” for the sake of a clean election. It is an anecdote that, along with the turnout, exemplifies how much Afghans as a people have accepted elections and want them to be clear even if many of the old, corrupt practices still predominate at more senior levels.

Even as everyone waits for the results of the parliamentary elections, all attention is swinging to the presidential election. President Ashraf Ghani Ahmadzai is badly weakened. Governance in the countryside is generally esteemed to be poor. His government appears to be melting down as senior figures abandon ship; his finance minister resigned, his former national security advisor and deputy foreign minister are both opposition candidates. There is no ambassador in Washington because Ghani’s capable ambassador had to be moved to Kabul to take over the national security portfolio.

The most repeated comment I heard from a variety of opposition leaders was that the one thing they all agreed on was that President Ghani should not have a second term. Ethnic divisions have seriously deepened during Ghani’s tenure with many seeing him as an eastern Pashtun nationalist who is freezing out other ethnic groups. This perception may be exaggerated, as Ghani and his supporters maintain, but it exists. One young Hazara, a group long on the bottom of the social pecking order and many of whom voted for Ghani, told me he felt betrayed. He had seen Ghani’s call to bring in more Afghan youth as a step into the future and now believes it was a trick simply to clear the way for the appointment to Pashtun youth. Other young supporters of the president dispute this.

Despite all this, it would be a mistake to count Ghani out. We have no real idea of his national popularity among people, rather than leaders. Our perceptions are far too dependent on contacts in Kabul since fears of risk (largely driven from Washington) have bottled up Embassy personnel even where they could circulate with deployed U.S. military. One former Ghani supporter who has turned against him noted how his guards and their families in the provinces all support Ghani because they think he is trying to help them. Many of those who may run against Ghani have dubious reputations. None of the electoral blocks that are trying to form are yet solid. Actual candidates and their tickets will only be known in December when candidates register formally for the election. Many of those who now appear to be running will settle for positions on someone else’s ticket if they can get it. Former national security advisor Hanif Atmar is widely reckoned as a leading contender, but there is enormous jockeying for position among various leaders. The promises of today are weak guarantees for the performance of tomorrow.

There is great discussion of forming a broad coalition of political and ethnic groups to oppose Ghani. If this really comes about and holds together it could defeat him, at least in an honest election. But such ideas have failed many times in the past and the coalition has not yet happened. The apparent decision of the largely Tajik party Jamiat to run a candidate may further diminish the chances to form a big party consensus and will make the election more ethnically divisive. If there are multiple candidates, then none are likely to exceed the 50 percent required for victory and there will be a second round. There would be a lot of bargaining in that case and many opportunities for Ghani to pick up support from disaffected “also rans.” The scenarios discussed by Afghan leaders multiply geometrically. In short, no one should count Ghani out and other governments would be well advised not to treat him prematurely as a lame duck.

An election that ends like that of 2014—in massive fraud and dispute—is a broadly shared fear. Afghan politicians have gotten used to America saving their country from disaster, even if they later criticize the solution. The danger is that they will think that they retain the freedom to push their own positions to the limits and then find that there is no American appetite for saving them. Worse, if President Donald Trump wants to exit Afghanistan and is mainly restrained by the desire to avoid being responsible for a disaster, then a prolonged crisis after the election could provide the political top cover for Trump to leave on the basis that Afghans simply cannot be saved.