U.S. Arctic Policy: The Video and the Audio Are Out of Synch 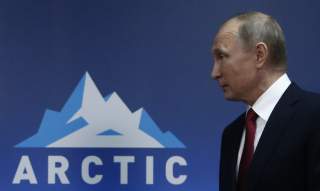 On December 8, 2017, Russian president Vladimir Putin gave the order to begin loading LNG on the world’s first commercial ice-breaking LNG carrier, the Christopher de Margerie. That ship will make unescorted trips from Yamal to mostly Korea via the Northern Sea Route (NSR) in the Russian Arctic from July through December every year.

These impressive vessels were built in Korea for Russia to transport LNG from Russia’s new Yamal LNG megaproject. The Yamal LNG project is lead by the Russian firm Novatek. The ships are owned by the Russian firm Sovcomflot (SCF Group) but flagged in Cyprus. A fleet of up to sixteen ships is envisioned for SCF. According to press reports, the same Korean firm constructing the Margerie has orders for twelve additional ships for two joint ventures involving investors from China and Japan. The massive Yamal LNG project is expected to produce 16.5 million metric tons of LNG a year. The project aims to tap natural gas reserves totaling more than four billion barrels of oil equivalent. To do so, more than two hundred wells have been drilled and three liquefaction trains built, each with a capacity of 5.5 million metric tons. It is estimated that nearly 16.5 million metric tons of LNG will transit through the new port of Sabetta, with all LNG production sold to customers in Europe and Asia under fifteen- to twenty-year contracts.

Novatek owns 51 percent of the project, the French oil company Total owns 20 percent, and China’s China National Petroleum Company and its Silk Road Fund own the remaining 29–30 percent, which means that portion is mostly paid for with People’s Republic of China (PRC)  government money. The massive $27–$60 billion project (some estimates) includes an international airport and the deepwater port Sabetta, which has the capacity to accommodate four LNG carriers simultaneously.

By all appearances Yamal LNG looks to be a highly modern operation if—for no other reason—Total’s French shareholders will not want the company affected by substandard environmental practices that could cost their reputation or pocketbook.

Yamal LNG is just one of five major projects in and around the Yamal Peninsula; more or less the midway point between its vast eastern and western Arctic coastline. The five major areas of exploitation in the Yamal peninsula include Yamal LNG. Major investors include, as mentioned, China, France and India. No U.S. companies are participating. The U.S. government has had no input into the standards that these projects would follow even though most are on or near the coast and an industrial accident would potentially affect the coastlines of other Arctic countries, including the United States.

The Yamal Peninsula is not the only venue for development. There are significant Chinese financed mining projects under development and talk of Chinese investment in Canada to develop its Northwest Passage (instrumentation, ports, terminals) plus possibly more pipelines and rail lines. Some Canadian scholars and officials have even suggested that Canada should embrace China’s Polar Silk Road because, in many respects, China offers Canada more tangible economic and political rewards than the United States. Brisk economic and political activity is taking place in Greenland, Iceland, Norway, Russia and Canada because those nations—in contrast to the United States—have figured out that their security and economic well-being is heavily linked to the Arctic because of its resource and transit benefits.

The U.S. policy community and press is more inwardly focused on the climate change in or near the Alaskan Arctic; even though most of those efforts cannot prevent other countries from exercising their sovereign right to host foreign investment and resource-extraction projects. Indeed, Greenland and to a lesser extent Iceland and Russia, both view Chinese FDI as an important ticket to economic independence. As detailed in a new CNA Report Unconstrained Foreign Direct Investment: An Emerging Challenge to Arctic Security, all FDI is not equal and that past instances of Chinese FDI has resulted in trade-offs in terms of sovereignty, labor standards and environmental protection that need to assessed alongside the economic benefits of outside cash.

The Arctic economy is comparatively small. Yet, there has been significant foreign direct investment (FDI) North of 60 degrees latitude and China appears to be leading investor (nearly $90 billion 2005–2017) in a range of projects. The projects include mining, energy, infrastructure and financial products. Hard numbers are difficult to come by but the CNA study suggests that Chinese FDI appears to dwarf that of other countries. Some of this is due to the fact that investors in the United States and other western countries perceive the Arctic as “hostile environment for industry and development” because of negative political perceptions of engaging in economic activity in the environmentally fragile Arctic region. Sanctions against Russia—a leading venue for FDI—has created considerable uncertainty among United States and some Western Investors who lack assurances that a direct investment in the Russian Arctic, or entering into a joint venture with a Russian company, will have to be abandoned if additional sanctions are imposed.

China obviously takes a different view of the Arctic both in terms of its investment patterns and its policies towards development. China’s State Council Information Office issued a new Arctic Policy on January 26, 2018. It asserts that China is an “important stakeholder in Arctic Affairs” and a “Near-Arctic State.” They also assert that as a permanent member of the UN Security Council, China “shoulders” the important mission of jointly promoting peace and security in the Arctic.” China honestly asserts that the “utilization of sea routes and the exploration and development of the resources in the Arctic . . . have a huge impact on the energy strategy and economic development of China.” Lastly, sharing “interests with Arctic States,” China hopes to work with all parties to “jointly build a ‘Polar Silk Road,’ and facilitate connectivity and sustainable economic and social development of the Arctic.”

China has moved past the words in its Policy document in a number of concrete respects. For starts, the CNA reports estimates nearly $90 Billion of Chinese investment (probably larger now) north of sixty deg. North and $1.4 Trillion in overall investment in the countries bordering the Arctic Ocean. These investments are well diversified. Second is the fact that even though China has no Arctic coastline, it commissioned its first icebreaker, the Xuelong 1, in 2010. China’s second Icebreaker, the Snow Dragon 2, is now under construction in China and will be completed in 2019. China has also been a major player in Arctic research under the auspices of the Polar Research Institute of China. It has a sizeable facility known as the Yellow River Station on Svalbard Island and a joint China/Iceland observation facility in Karholl. China also has research facilities in Iceland and Canada. Most recently, there was the announcement in January of 2018 of the creation of a “data silk road” that is being built by Chinese and Finnish state owned firms to lay undersea cables which traverse the Arctic. Lastly, China has moved past the concept phase in terms of shipping: its state owned COSCO shipping line has both sent cargo container vessels through the Arctic waters via the Northern Sea Route (NSR) and has plans to increase the number of transits of both cargo and heavy lift vessels because a transit via the NSR can save twelve to fifteen days in transit time and consume much less fuel. This evidence of concrete PRC activities in the Arctic means that its Arctic Policy has concretely moved beyond the stage of glossy publications. The UK based Cryopolitics examined what is meant by the term “Polar Silk Road” and concluded that:

If you thought the Silk Road was all about caravans of camels and spices trudging across the steppes of Central Asia, then I’m afraid you are wrong. Replace those two-humped ungulates with icebreaking tankers ferry gas between Europe and Asia via Russia’s forbidding north shore and that’s more like it.”

Some have said that U.S. analysts and government officials should be cheering China’s expeditionary spirit and its contributions to Arctic research and Arctic Development. But, the statements in China’s Arctic Policy that it regards its right to have a terrestrial presence of Svalbard Island as a legal entitlement to regulate the region and its desires to actively participate regionally at a bilateral and multilateral level to promote “cooperation” in all fields especially regarding climate change, environmental protection, ecosystems, shipping routes, resource development . . . and capacity building” raises serious doubts that China does, in fact, respect the sovereign rights of the coastal nations. Under general international law and the 1982 UN Law of the Sea Convention, coastal countries own all rights to develop, manage, and exploit the land based and sea-based resources out to two hundred nautical miles from each country’s coastline. Given that China does not own coastline and no rights under UNCLOS or general international law to determine how the region is supposed to be developed (and protect the interests of those who live there), it is important that the regional states decide among themselves how this essentially closed-sea, and the coastal resources will be developed.