The U.S.-Canadian Relationship Must Remain Strong 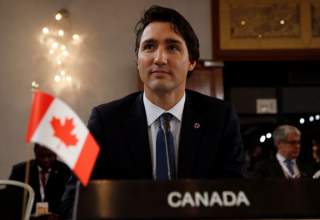 Personal fondness for a foreign country plays such a large role for many participants in debate about U.S. foreign policy (including policy toward the Middle East) that I should begin this piece with a disclosure: I like Canada. I grew up in the Detroit area, where heavily populated parts of the United States and Canada are separated only by a river. Canadian coins got freely mixed with U.S. ones in the change in our pockets. As a kid I watched Hockey Night in Canada on the Windsor television station. When I was going to college in New England, my usual travel route between home and school went through southern Ontario. As both a youngster and an adult, I have enjoyed many vacations in Canada. I have always found appealing the Canadian national temperament, with its politeness and openness.

The Trump administration’s treatment of Canada is deeply disturbing for reasons that go far beyond personal fondness. Americans owe Canadians an apology—if not for voting for Donald Trump, then for somehow making his abusive treatment of our northern neighbor possible.

If one were to name any one foreign country that should warrant U.S. friendship on the basis of cultural affinity and common experiences, Canada would be that country. The commonality includes one of Canada’s two languages, a shared relationship to a richly endowed land, and so much else, even sports—in a year in which a team in the U.S. national capital won the pro championship in Canada’s national sport of ice hockey.

More important are the common political and security interests that the United States has with the country having the second largest land area in the world. The two nations share both a continent and the longest international boundary in the world. The commonality of security interests was illustrated during the Cold War by construction in the Canadian arctic of early warning radars that were the first line of defense of the United States against attack from the Soviet Union. Today, any concern about terrorists coming from abroad is met far more effectively by looking at Canada and the United States as a unit rather than trying to make that long shared border a barrier. Immediately after the 9/11 attacks, Canada opened its airports as alternative landing sites for U.S.-bound flights to get any potentially threatening aircraft out of U.S. airspace.

Overseas, Canadians have shed their blood on the beaches of Normandy and many other battlefields they have shared with the United States. As forensic experts sift through those boxes of remains from North Korea, it should be noted that in the Korean War, 26,000 Canadian soldiers served, and 516 of them died.

There are ample reasons for U.S. leaders to go out of their way to maintain a good relationship with Canada. Trump instead has gone out of his way to insult and hurt Canada.

The insulting treatment was on full display after this year’s G-7 summit hosted by Canada. Flying home from the meeting, Trump not only retracted his concurrence in a joint statement but derided Canadian Prime Minister Justin Trudeau as “very dishonest and weak,” supposedly because of comments by the prime minister at a closing press conference. All Trudeau had said was that if Trump was determined to impose steel and aluminum tariffs on Canada, then Canada would have to respond in kind.

Trump’s trade war figures highly in the relationship today, given the volume and importance of U.S.-Canadian trade. Canada is the largest market for exported U.S. goods, and the third largest supplier of goods that the United States imports. Trade at a single border crossing in my old metropolis—the Ambassador Bridge across the Detroit River—is equal to all trade between the United States and Japan. The extensively interwoven nature of the two economies means that trade with Canada is where the United States, since the trade war began, is inflicting many of its self-inflicted wounds—such as by imposing tariffs on metal or parts from Canada that go into finished goods manufactured in the United States. As the smaller of the two economies, Canada suffers, of course, proportionately more from any impediments to the cross-border trade.

Insult has added to the injury with the way Trump has conducted this part of his trade war. This includes his repeatedly uttered falsehood that the United States has a trade deficit with Canada when it actually is a surplus. More galling to Canadians—against the backdrop of the shared security interests and all that spilled blood on foreign battlefields—was the Trump administration’s invocation of national security as its rationale for circumventing World Trade Organization rules when it imposed the tariffs on steel and aluminum.

Now comes the administration’s incomprehensible posture toward an eruption by Saudi Arabia against Canada over a human rights issue. The case involves a Saudi writer and activist named Raif Badawi, who received a sentence of ten years imprisonment, 1000 lashes, and a fine for “insulting Islam through electronic channels”. His wife, who fled to Canada after her own life was threatened in Saudi Arabia, says that her husband, whose health is failing, may not survive the flogging part of the sentence, most of which has yet to be carried out.

The arrest this year of Badawi’s sister Samar—herself an activist who has worked on behalf of women’s rights—led Canadian Minister of External Affairs Chrystia Freeland to tweet, “Canada stands together with the Badawi family in this difficult time, and we continue to strongly call for the release of both Raif and Samar Badawi.” This was typical international human rights criticism, no stronger or more intrusive than countless such statements that the U.S. government, under any administration, routinely makes about other countries. But the Saudi regime delivered an over-the-top response that included expulsion of the Canadian ambassador, cessation of commercial flights to Canada, withdrawal of Saudi students from Canada, and suspension of purchases of Canadian grain.

Evidently the regime led by Saudi Crown Prince Mohammed bin Salman chose to make Canada an example in an effort to discourage any foreign criticism, from any quarter, of his regime’s harsh rule. Certainly there was no justification for a response that would have been more appropriate if Canada had just invaded some other country’s territory or tried to instigate a coup d’etat. The response only underscores how abusive have been the Saudi practices in question and thus how justly vulnerable the regime is to international criticism.

Tweeter-in-chief Trump, who has used the same medium for scores of outbursts far more insulting than Freeland’s statement (not to mention many of them being false), surely understands how inappropriate the Saudi response was. But his administration did not call out abuses where abuses exist. It did not make common cause with the neighboring democracy with which the United States shares many interests, over the Middle Eastern autocracy with which it shares far fewer interests.

Instead, it just said that, well, there’s a dispute between Canada and Saudi Arabia and we hope the two of them can work it out. Even when incredulous reporters sought more of an explanation at the State Department press briefing and asked whether the administration believes a Saudi general when he accuses Canada of support for international terrorism, spokeswoman Heather Nauert stuck to the pusillanimous neutrality.

Trudeau, in maintaining his government’s position about the Badawi case, stated, “Canadians have always expected our government to speak strongly and firmly, clearly and politely, about the need to respect human rights around the world. We will continue to do that.” It probably is only that characteristic Canadian politeness that keeps his government from loudly expressing what would be well-justified anger at the Trump administration for its handling of the matter.

Trump’s fondness for autocrats over democrats is a well-known background to this episode. As for regimes in the Middle East that are objects of his fondness, Susan Rice summarized the situation bluntly and accurately: “It’s no wonder these countries love President Trump, because unlike under his predecessors, the United States has rolled over and played dead while they do whatever they please.”

Once again to our Canadian friends: many Americans are really sorry about this. Please try not to blame all of us south of the border for what you are experiencing.