The U.S.-China Relationship Is At a Crossroads 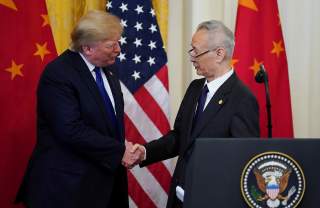 President Trump has declared a temporary truce in his trade war with China. Economists point out that both countries gain from trade, but strategists complain that in terms of relative power, China gained more. Vice President Mike Pence recently pointed out that over the past 17 years, China’s GDP has grown more than nine-fold, and we should regard China as a strategic rival. Gone are earlier administrations’ rhetoric about engagement, and while Pence disavowed it, many observers believe that decoupling has already begun.

Former Australian Prime Minister Kevin Rudd recently summarized the many strands of U.S.-China economic interdependence. In trade, the U.S. accepts 19% of China’s exports while China takes only 8% of U.S. total exports, but despite this two to one asymmetry, America does not have all the cards in this game and China knows it. On foreign direct investment, the total stock of US FDI in China is $269 billion while Chinese FDI in the U.S. reached $145 billion, but annual flow rates have been decreasing as both sides tighten policy constraints. In capital markets, the overall financial relationship totals over $5 trillion including nearly two trillion in Chinese listings on US stock exchanges and $l.3 trillion in Chinese official holdings of U.S. government bonds. Rudd argues that despite strategic difficulties the two governments will not decouple these arrangements.

Technology is the most fraught area because of China’s neo-mercantilist policies. China’s “Made in China 2025” program and its goal to be first in Artificial Intelligence by 2030 have led the American government and companies to be more wary about a high degree of technology interdependence. In the area of education and talent, over three million Chinese students have been educated in American universities over the past 20 years, and over 350,000 Chinese students study in the U.S. each year, although there has been a decline in new enrollments.

In addition, military and environmental interdependence cannot be decoupled. In military terms, both countries hold each other hostage in nuclear deterrence, and despite aspirations for strategic missile defense, there are many ways to deliver weapons of mass destruction. Moreover, both countries are positively interdependent in slowing the spread of such weapons. After being a one -time proliferator, China has become a supporter of the international non-proliferation regime.

Climate change can do great environmental damage to both countries. Melting glaciers in the Himalayas and in Greenland will inflict serious costs. China has now surpassed the U.S. as the largest producer of greenhouse gases, and together China and the U.S. produce 40 percent of the global total. Neither country can solve this problem alone, nor can either decouple from it. Climate change obeys the laws of physics, not politics. While some types of interdependence produce asymmetrical vulnerabilities that can be used as strategic weapons, other types produce a mutual vulnerability that is difficult to escape without cooperative measures. If power is the ability to affect others to get the outcomes one wants, it is important to distinguish power over others from power with others. In some instances, such as climate change, power over interdependence can only be obtained with others.

Some decoupling of interdependence is likely, particularly in areas related to technology that directly affect national security. Both sides will wish to limit vulnerabilities that endanger critical infrastructure or have important implications for military postures or political stability. It would be a mistake, for example, to allow Huawei to construct our telecommunications networks, and China has long restricted companies like Google and Facebook for security reasons. Reducing strategic risk without imposing undue costs is difficult because intricate supply chains are not easily undone. But bilateral and multilateral negotiations can help to prevent partial technological decoupling from degenerating into a stampede toward full protectionism.

Rapid Asian economic growth has shifted power to the region, but Asia has its own internal balance. Chinese power is balanced by Japan, India, and Australia among others. None want to be dominated by China, though none wants to see a Cold War containment strategy that would try to force them into an economic divorce from China. If the United States maintains our alliances, the prospects are slight that China can drive the United States from the Western Pacific, much less dominate the world. We have high cards for managing our traditional competitive strategic rivalry with China.

The more difficult question for an effective strategy will be whether the United States and China will develop attitudes that allow us to cooperate in producing global public goods and managing interdependence while competing in other areas. Exaggerated fears and worst-case analyses make such a balanced policy difficult, and hasty efforts to decouple lead to a failed strategy that reduces our power.

Joseph Nye is a professor at Harvard’s Kennedy School of Government. This draws from his book Do Morals Matter? Presidents and Foreign Policy from FDR to Trump. New York, Oxford University Press.