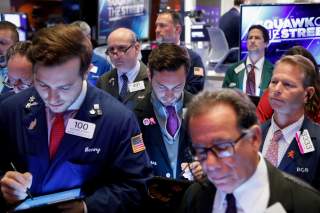 Once again, President Donald Trump has bent over backward to give China the chance to the do the right thing on trade.  And once again, China is likely to spurn the opportunity.

In exchange, the Trump administration put off a planned increase in existing tariffs on Chinese imports.  A big increase in tariffs is still scheduled for December 15, especially if the Chinese don’t follow through as details are put on paper.

Trump deserves enormous credit for forcing China to make concessions while still preserving tariffs on about half of what we import from China, which are part of a new reality that is driving business and investment away from our chief adversary in the world. Gone are the days when Wall Street could ship American manufacturing jobs to China without a care in the world. Trump has also proved again how tariffs are an effective tool of U.S. statecraft.

But it is important to keep in mind that the Chinese government will probably mess this up. The reason: some governments just cannot be trusted to keep their word.

Indeed, China’s historical conduct brings to mind a passage about the former German government from Albert Speer’s book, Inside the Third Reich. Referencing Adolf Hitler’s foreign minister, Speer wrote: “For Ribbentrop’s fiftieth birthday in 1943 several of his close associates presented him with a handsome casket, ornamented with semi-precious stones, which they intended to fill with photocopies of all the treaties and agreements concluded by the Foreign Minister. ‘We were thrown into great embarrassment,’ Ambassador Hewel, Ribbentrop’s liaison man, remarked to Hitler at supper, ‘when we were about to fill the casket. There were only a few treaties that we hadn’t broken in the meantime.’  Hitler’s eyes filled with tears of laughter.”

Examples of communist China’s similar flexibility with adhering to its agreements are easy to find. For example, the Chinese government broke virtually all of the major pledges it made when it was accepted into the World Trade Organization in 2001, including agreements to respect intellectual property, not discriminate against non-Chinese companies, and reform its legal system.

The Chinese government broke a pledge to Great Britain and the people of Hong Kong to respect the former colony’s relative autonomy after its handover, and progress toward democracy with universal suffrage by 2012. We’re seeing the result of those broken promises on the streets of Hong Kong today as citizens from all walks of life protest.

In 2016, Chinese president Xi Jinping promised former President Barack Obama that Beijing would not militarize the South China Sea. Shortly thereafter, China did just that, installing missile systems and other material on islands it constructed in the economically important waterway.

Xi also promised Obama that the Chinese government would cease cyber attacks to steal U.S. government and corporate information. It made for a nice photo op, but Beijing never stopped this misconduct and it continues to this day.

Numerous other examples abound. In fact, it’s hard to find a trade a security-related promise that Beijing has kept. When America and other countries with the rule of law sign agreements, they become solemn promises and have the force of law. For China and other authoritarian governments, they are mere gestures—often insincere ones.

What does this behavior tell us about the “Phase 1” trade deal that Chinese negotiators agreed in Washington? We can safely predict that Beijing will backpedal or cheat.

As for the key immediate concession that Trump extracted from China, which was a promise to increase purchases of U.S. agricultural goods to $50 billion, Beijing isn’t even waiting for negotiators to complete a written agreement to renege.  \Already, sources in Beijing are signaling that such purchases are contingent on the U.S. dropping all new tariffs on China.  That wasn’t part of the deal.

The stock market is nonetheless cheering the deal and Trump has remained optimistic, again trying hard to make diplomacy work. He has been tougher on China than any president but is not yet prepared to slam the door on Beijing and signal the full “decoupling” of the U.S. and Chinese economies. But Chinese government duplicity and ill will may stymie his best efforts—and the prospects of comprehensive trade deal. Don’t expect the trade war to end.