U.S.-India Ties: Long-Term Courtship, but No Marriage in Sight 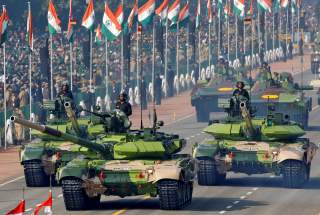 On June 1, 2019, the Department of Defense released its Indo-Pacific Strategy Report, which reinforced and expanded upon President Donald Trump’s signature “Free and Open Indo-Pacific Strategy,” first articulated in 2017. The 2019 strategy report highlighted, among other things, the importance of U.S.-India relations and described them as being “underpinned by shared interests, democratic values, and strong people-to-people ties.”

This continues a post–Cold War trend in which the United States and India have sought to improve relations for a variety of reasons. The two countries signed their first formal defense accord in 1995, followed by additional defense framework agreements in 2005 and 2015. During the second Bush administration, the two countries deepened their relationship by focusing on issues of mutual concern such as counter-terrorism, nuclear cooperation and China’s rising influence. Additionally, in 2016, the Obama administration designated India as “major defense partner,” giving India a status commensurate with America’s closest allies.

More recently, the Trump administration orchestrated the two countries’ inaugural 2+2 Ministerial Dialogue in 2018, which saw New Delhi and Washington sign the Communications Compatibility and Security Agreement (COMCASA), the second of three logistics agreements that will advance U.S.-India interoperability and exchange of information.

Given these positive trends, it appears that the U.S.-India relationship is beginning to resemble a de facto alliance, cementing a democratic bulwark in the Indian Ocean that can oppose China’s increasing inroads via the latter’s Belt and Road Initiative (BRI) and associated activities. However, as tempting as this narrative may be, it must be taken with a generous grain of salt.

India, like any sovereign country, pursues its own national interests, which may or may not align with those of the United States. In particular, New Delhi pursues strategic hedging as a key tenet of its foreign policy, to both enhance its security and ensure its sustained freedom of action. This should not come as a surprise to U.S. policymakers.

The danger is that the U.S. side may become too confident regarding the state of U.S.-India relations. To use a relationship metaphor, while some Americans may perceive U.S.-India ties to be comparable to engagement just prior to a marriage, many India strategists may see it in terms of a long-term courtship without the full legal commitments that a marriage would entail.

Moreover, as with any relationship, each party must come to terms with the preexisting friends and future in-laws of his or her partner. For the United States, this means coming to terms with India’s preexisting relationship with countries such as Iran and Russia, with which New Delhi has long shared mutual interests.

In the case of Iran, the United States is pressuring India to stop its oil imports from that country. However, this approach ignores the fact that India and Iran have trade, cultural, and linguistic ties that go back centuries. For instance, the Persian language has served as a mother language to some Indian languages and dialects. Moreover, Persian literature, poetry, art, and architecture all intertwine with India’s.

Similarly, India has ties with Russia that trace back to the Cold War era when both countries were in general alignment on many issues (but not formal allies). In the contemporary context, both New Delhi and Moscow see the other as serving as a hedge against Chinese power. These dynamics are not likely to dissipate as a result of U.S. pressure.

However, in the longer term, Washington is wary of New Delhi’s continued reliance on Russia for key weapons systems, such as the S-400 anti-aircraft missile system. U.S. officials fear that a residual arms trade between India and Russia might impede growing U.S.-India military ties. Furthermore, such arms transfers directly contravene the goals of the U.S. sanctions law known as CAATSA (Countering America’s Adversaries through Sanctions Act), one of the most ambitious laws of its type in recent history.

To be sure, U.S.-India relations today are much closer than they have been in the past and this momentum is likely to continue. Yet one should not forget that at the end of the day, most Indians still abide by the principles of non-alignment, multi-alignment or simple neutrality. The United States must deal with that reality as it pursues its Free and Open Indo-Pacific strategy.

Professors Hayat Alvi and Paul J. Smith work in the National Security Affairs (NSA) Department at the Naval War College in Newport Rhode Island. The views expressed in this essay are solely their own.