U.S. Military Domination Has Been Disastrous for the Middle East—And America 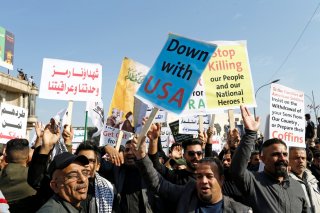 Editor’s note: In early August, The National Interest organized a symposium on American foreign policy in the Middle East under the Biden administration. A variety of scholars were asked the following question: “Given Joe Biden's recent decisions in Afghanistan and Iraq, is the president right to be reducing the U.S. military presence in the Middle East?” The following article is one of their responses

The track record of Pax Americana in the Middle East is crystal clear: The region suffered from five armed conflicts in 1998. By 2019, that number had grown to twenty-two. Obviously, these conflicts are not necessarily the fault of the United States, but as the de facto regional hegemon, Washington has designated itself responsible for the region’s stability. By its own misguided preference, the buck stops with the United States. (And not to be discounted, many of these conflicts are spillovers from the Iraq war, which certainly was the fault of the United States.)

But the problem goes deeper than just an erroneous strategy. Washington has long been confused about what its actual interests in the Middle East are. The average Washington foreign policy hand will give a long list of interests—from protecting Israel to safeguarding the region’s energy resources to “standing with our allies”—without the ability to distinguish between the ones justifying the use of military force and the ones that do not. Moreover, the all-encompassing interest of “standing by our allies” renders any discussion about U.S. security interests meaningless, as the United States effectively subordinates its own vaguely defined interests to those of its many (often reckless) security partners.

Hence, the rivals of our partners become our enemies, regardless of whether they actually pose a threat to America’s real interests. As our enemies-by-association accrue, the United States ends up in more wars and conflicts, few of which are necessary to enhance American security though taxing to the American people and the troops nevertheless. Along the way, the United States sets up more military bases in the region, sells more weapons to the region’s authoritarian states, and commits itself to provide security for more countries, all the while making U.S. troops in the Middle East sitting ducks for the growing list of regional entities with grievances against us—most of which are rooted in the United States’ unwanted military presence in the region in the first place.

America’s core interests in the region—the ones that could warrant the use of military force—are limited. Protect the United States from attack and facilitate the free flow of global commerce. By implication, this means that the United States needs to ensure that the region does not fall under the hegemony of a hostile power and that the Strait of Hormuz is kept open. As Eugene Gholz demonstrated in a recent Quincy Paper, neither of these strategic objectives necessitate permanent military bases in the region, let alone U.S. hegemony over the Middle East.

But it gets worse: The presence of U.S. forces in the region and our willingness to get entangled in our partners’ regional disputes with almost no questions asked have disincentivized countries benefiting from the American security umbrella to resolve their conflicts diplomatically. Relying on the United States to resolve their problems more or less cost-free was rationally deemed a better choice than engaging in tricky give-and-take diplomacy that invariably would entail costly compromises. The latter will only be deemed the optimal option once these partners can no longer hide behind U.S. military might.

In this sense, the U.S. military presence has stood in the way of indigenous efforts to resolve regional conflicts, much to the detriment of regional stability. If Afghanistan proves the first step in a broader U.S. withdrawal, the impetus will fall on regional states to shoulder the burden of regional stability themselves. The United States can—and should—support diplomatic efforts to that end. But that is the job of diplomats, not soldiers.

Trita Parsi is an award-winning author and the 2010 recipient of the Grawemeyer Award for Ideas Improving World Order. He is the Executive Vice President of the Quincy Institute for Responsible Statecraft and an expert on U.S.-Iranian relations, Iranian foreign policy, and the geopolitics of the Middle East.