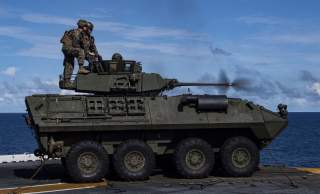 World War I revealed the cost when military doctrine and organization fail to meet changing conditions. As is true now, war was thought unlikely in 1914. Globalized international trade was so successful that war was deemed unprofitable, and therefore unlikely. But a single assassination in Sarajevo triggered a massive and unexpected war.

Total surprise—strategic, operational and tactical—and early disaster gripped the combatants. Early twentieth century industrial capabilities brought great change to armed conflict. The changes quickly became obvious but only in brutal hindsight. Standardized mass production created mass quantities of weapons and ammunition with common characteristics and standardized gauges. Massive troop deployments and massive logistics flowed over newly capable railroad networks to the front. Machine guns, barbed-wire barriers, massive artillery barrages and even poisonous gas made battlefields lethal to maneuvering forces. The doctrines and organizations brought to the conflict by the warring nations and their forces—notably relentless attack—were bloodily rubbished. The result was the stalemate of grinding trench warfare, the destruction of four empires, and massive casualties over years of conflict.

We face the same hazard of outdated doctrine and organization in a changing world. Today’s challenges have greater speed and variety than those of the last century. Today’s technology exerts an ever-accelerating rate of change within and among all domains of conflict. The traditional domains of air, land and sea, and the new domains of cyber, space and the electromagnetic spectrum, increasingly affect one another. Armed conflict, also known as combat or war, will always be the realm of danger, exertion, uncertainty, and chance. But the ways of armed conflict transform, often suddenly and brutally. It’s impossible to get everything right in an environment of accelerating change and nearly infinite variables, but we need to be mostly right in our doctrine and organization, or risk prompt and enduring defeat. Failure to recognize that the problem is changing while our doctrine and organization remain in place will be deadly.

Northeast Asia is the most urgent challenge. Our regional force posture, doctrine and organization bear strong resemblance to what we created in the Cold War’s early days. In those days, less than five years after the conclusion of a global conflagration, U.S. forces returned to Asia in response to an unexpected war in Korea and threats emerging from the USSR and Communist China. As the U.S. piled forces into Korea, we worked to prevent conflict across the Taiwan Strait and reversed course on Japan’s disarmament. The war in Korea remained in Korea, even with the addition of Chinese forces. North Korea, and the People’s Republic of China, were not capable of projecting any significant force seaward from the Asian mainland. Korea was the battlefield, and Japan became the sanctuary.

Today we have U.S. forces in Korea and Japan, just as we did in 1953 when the fighting stopped. Our forces are modernized but organized today much as we were when North Korea and China had no means to project force against our maritime allies. Forces in Korea are well known for readiness to “fight tonight,” but Japan is no longer much of a sanctuary. North Korea’s capabilities, as well as those of China and Russia, now reach far beyond the Asian mainland. North Korea’s missiles and China’s “gray zone” maritime and aerial violations of Japanese territory give them a “standing start” capability for violent aggression.

In the face of Chinese and North Korean capabilities, potential conflict is as much a clear and present danger to Japan as it is to the Republic of Korea. Readiness to “fight tonight” is increasingly needed beyond the Korean Peninsula. China and North Korea now routinely project force beyond the Asian mainland as instruments of coercion and intimidation. Russia is a consistent, if less frequent, provocateur. Perhaps to remove any doubt about the Kim family’s intent, will and skill, North Korea recently deployed and employed a weapon of mass destruction—VX nerve gas—in Malaysia. Kim regularly launches missiles toward and over Japan, while his nuclear program continues. China exerts continuing and increasingly provocative air and sea incursions into Japanese territory with military aircraft and paramilitary maritime forces in a coercive, relentless “gray zone” campaign. The region’s issues and the range of deployed weapons systems in China and North Korea will ensure that Taiwan and Japan are drawn into any conflict that comes to Korea. U.S. and Japanese forces in Japan need to be ready to “fight tonight” as a combined force to deter and counter these compelling threats.

Japan’s adaptation to the growing threat includes the creation of a National Security Council staff, the creation of the Acquisition, Technology and Logistics Agency within the Ministry of Defense, and the creation of a new Joint Dynamic Defense doctrine. Japan developed command structures within the Ground Self Defense Force to allow for more rapid response and shifted forces from Northern Japan to the Southwest Islands. Their newly-activated Amphibious Rapid Deployment Brigade is essential to the defense of an archipelago of 6,852 islands. Our collocated air and missile defense headquarters are a vital component of defense. More work is needed to achieve the needed high degree of mutual support among Japan’s air, land and sea forces, and within the U.S.-Japan alliance.

U.S. forces in Japan are organized today, as was true at the Korean armistice, along service component lines, with Army, Navy, Air Force and Marine Corps commands all reporting to the Commander Indo-Pacific Command (USINDOPACOM). Japanese can truthfully say that they are as joint within Japan as the United States is.

We need an operationally capable joint U.S. command element in Japan that is charged with working daily with Japanese counterparts to develop the plans, organizations, doctrine and skills needed to ensure alliance forces are indeed ready to “fight tonight” as one force—joint and combined.

A joint command element has been suggested before, specifically making U.S. Forces Japan an operational command element. The response has been that it’s too expensive in terms of personnel and resources. Moreover, the idea of another sub-unified command in INDOPACOM (the other is Korea) commanded by (yet another) four-star general or admiral brings strong bureaucratic inter-service rivalry and political resistance. With these strong objections, it’s not at all likely that anything useful could be realized in any meaningful time frame by pursuit of a new four-star command element and its associated infrastructure, staffing and logistics.

Fortunately, there is another way to our goal that makes expanded use of forces and personnel already in Japan. Certain commands in the Western Pacific today, headed by lieutenant generals or vice sdmirals, are charged with maintaining the ability to act as a Joint Task Force Nucleus in time of need. Periodic exercises are done under INDOPACOM scrutiny to ensure readiness for this role. INDOPACOM maintains organized groups of personnel across its vast command with certain skill sets ready to immediately deploy as an augmentation cell when needed. The “nucleus” command element becomes officially and practically “joint” when the augmentation cell is joined. If conditions preclude deployment forward, the augmentation cell could be joined electronically.

III Marine Expeditionary Force is one of the service commands in Japan that is routinely tested by INDOPACOM for readiness to act as a Joint Task Force nucleus. The Seventh Fleet is another. When augmented by INDOPACOM’s Deployable Joint Task Force Augmentation Cell (DJTFAC, pronounced as “Digit FAC”) the needed nonresident skill sets are added to be a fully capable joint task force command element. Other senior service command elements in Japan should be full participants also, with the goal of enhancing capabilities to fight outnumbered and to assume a widely distributed nodal command structure to ensure resilience and redundancy.

The III Marine Expeditionary Force is located in the contested Nansei Shoto—Okinawa Prefecture—spanning over one hundred islands over six hundred nautical miles forming the eastern boundary of the East China Sea. Expanding on its charged duty as an INDOPACOM Joint Task Force Nucleus, III MEF should be tasked to work with Japanese counterparts to develop the means for mutual support among the JSDF air, land and sea components. Development of this joint capability must be matched with combined capability development across all alliance forces. This will produce solid operational and tactical integration of maneuver and fires across all alliance forces and all warfighting domains. It will bring the capabilities of mutual support and cooperative engagement across all domains and forces. On this foundation we must develop contingency plans for the defense of the Nansei Shoto, and a better understanding within the alliance on capabilities, intentions, and expectations. Quarterly exercises, done in a cost-effective live-virtual-constructive training system, should be planned over a regular cycle to build readiness of both Japanese and U.S. commanders and their staffs, and to build a high level of mutual support and confidence among all forces across the alliance.

U.S. and Japanese forces should create a Standing Combined Maritime Joint Task Force (SCMJTF) as a platform and laboratory for rapid development of capabilities and capacity. Other nations, including but not limited to Australia, India, Singapore and Taiwan, should also join this force for various exercises and contingencies, including those of disaster response and humanitarian assistance.