The U.S. Mission in Afghanistan Is Not Making Us Safer—It’s Time to Bring It to an End 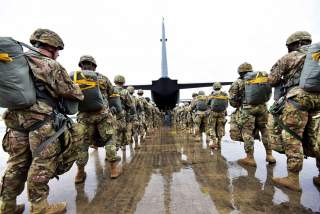 At his confirmation hearing to be the 17th U.S. Commander in Afghanistan, Lt. Gen. Austin Miller told senators he could not say when the war would end, but claimed the mission “is about protecting U.S. citizens,” by preventing Afghanistan from being used as a platform to attack America. The obvious reality, however, is that the mission has nothing to do with that goal.

As someone who served two combat tours in Afghanistan, it is especially difficult to watch as Lt. Gen. Miller follows the seemingly identical script used by the parade of generals who have preceded him. All claim we have to “win” in Afghanistan, because if we don’t, they imply, we’ll suffer another orchestrated attack on the homeland. These claims rest on two assumptions, both of which are demonstrably false.

First, is the claim that 9/11 “came” from Afghanistan. It didn’t. As was chronicled in amazing detail, the official 9/11 Commission Report showed how Khalid Sheikh Muhammed (KSM), the “principle architect” of the September 11 attacks, conceived, developed and then put his villainous plan into effect. The physical territory of Afghanistan played almost no part in the plot to attack America.

KSM grew up in Kuwait, earned a degree in mechanical engineering from an American university in 1986, travelled after graduation to Pakistan (where he met anti-Soviet mujahedeen fighters), fought with mujahedeen in Bosnia, then moved his family to Qatar. He stayed there until 1996, when he fled back to Pakistan to avoid capture by United States for terrorism-related charges.

While in Qatar, he traveled extensively on jihad-related missions to Sudan, Yemen, Malaysia, India, Indonesia, Iran and Brazil. KSM actually rebuffed a request by Bin Laden to move to Afghanistan, preferring instead to remain based out of Karachi, Pakistan. The plot to attack the United States on 9/11 was hatched in the mind of KSM based on his twisted ideology, formed by a lifetime of worldwide travels.

The only time Afghanistan came into the equation was when KSM went there to brief Bin Laden on the plan. This is crucial to understand, because the plot didn’t rely on Afghanistan in the least; the meeting could literally have taken place anywhere on the planet.

Second, there is the implication that our presence in Afghanistan has prevented any further attacks against our country, and that if we were to withdraw military forces, more attacks would likely follow. Yet I observed with my own eyes how utterly false this narrative is.

In the summer of 2011, at the height of the Obama surge, there were 140,000 U.S. and NATO troops in Afghanistan. As a team chief for a U.S. logistics unit, I had the mission of traveling throughout the country to assess the battle needs of tactical units. Despite such a high density of U.S. troops, I observed that there were vast portions of the country off-limits to U.S. and Afghan troops. The significance of this fact cannot be overstated in terms of the implications for American objectives: U.S. soldiers should eliminate direct threats to America and defend our way of life, and they should not be asked to permanently occupy and police Afghanistan.

KSM met Bin Laden in a cave in Tora Bora to brief him on the plot to attack America and then went back to his home in Karachi. That meeting could have taken place just as easily even during the pinnacle of the NATO mission in 2011.

We are therefore left with this stark reality: the U.S. military, however amazing and powerful an instrument, can never accomplish the stated objectives. The attack our country suffered on 9/11 would not have been prevented had U.S. troops occupied Afghanistan in 2001 and we will be no more or less secure from future terror attacks if U.S. troops withdraw tomorrow.

As with KSM, those who legitimately do pose a threat to us move frequently, visit countries all over the globe, often fill mundane government jobs in friendly nations, and especially today, conduct much of their nefarious activities with like-minded people all over the world via social media.

The stark bottom line: U.S. troops on the ground in Afghanistan, regardless of their many tactical wins, do not reduce the domestic terror threat. Instead of staying in Afghanistan and fighting that country’s political battles, we should refocus our limited resources on targeting transnational terrorists and deterring great power conflict.

Evidence overwhelmingly confirms President Donald Trump is right in wanting to bring the troops home from Afghanistan. Now is the time—there is no value in keeping them there and great cost and strategic risk in delaying a withdrawal.