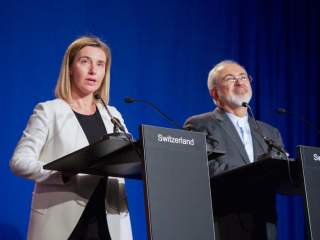 We have reached the one-year mark since Iran and the P5+1 agreed on a set of a parameters that became the basis for the Joint Comprehensive Plan of Action (JCPOA). While the history books will likely point to July 14, 2015 as the date both parties signed on the dotted line, those who look closer will point to April 2, 2015—the day the Lausanne framework [1] enshrined the key elements of the deal—as the watershed moment when a nuclear deal went from mere possibility to near-foregone conclusion.

So as Lausanne turns one, where are we? The last year has seen numerous successes. After Lausanne, the parties were able to finalize a historic agreement that survived a U.S. Congressional review with surprising levels of support. Iran has implemented key elements of the agreement with unexpected speed, and in February the more pragmatic political elements in Iran, buttressed by the promised sanctions relief of the nuclear deal, made inroads in the country’s parliamentary and Assembly of Experts elections.

On the other side of the ledger, the last year has also been rife with accusations that the United States was prepared to allow Iran a free pass on its aggressive non-nuclear-related behaviors in exchange for preserving the nuclear deal. Pundits speculated—and partners feared—that U.S. determination to have the JCPOA succeed would result in concessions that would encourage Iran’s most threatening regional behaviors to advance unchecked, now underwritten by new sanctions relief.

It is worth looking at whether and what the United States has really conceded in the last year, and whether the U.S. response has actually been appropriate and responsible. More importantly, at this one-year mark, it is worth reviewing what opportunities are on the horizon for the United States to demonstrate that it is not turning a blind eye to Iran’s provocations, and that its response will be strong, appropriate, and consistent with its interests in the region. America has a balance to strike—maintaining a firm posture where necessary, but also keeping the positive momentum of the nuclear deal intact.

The Reality of Iranian Actions

Iran’s continued ballistic-missile testing, its actions at sea and its behavior in the neighborhood have continued to be provocative and reckless. But in the aftermath of the JCPOA, and in the run up to the recent Iranian parliamentary elections, these actions were intended as much for Iranian domestic consumption as they were to test U.S. determination. Iran’s hard-line circles saw these as low-cost opportunities to assert their role, and calculated that domestic audiences would applaud strong Iranian actions while the United States was unlikely to respond aggressively. The good news is that these tactics failed to stall the political momentum of more pragmatic forces in Iran who have sought to implement the deal. But the reality is that this type of behavior is likely to continue and even escalate.

Whatever the Iranian motives in these incidents, it would be wrong to characterize the reaction—or non-reaction—of the United States in these events as timid. The U.S. Ambassador to the UN has stated that Washington will raise the latest missile tests in the UN Security Council, and Washington also imposed new national sanctions on Iran for its tests late last year. The U.S. Congress has seized on the ballistic missile tests as platform to introduce new sanctions legislation.

With respect to Iranian provocations at sea, the U.S. naval and military presence in the Gulf has remained formidable in terms of number of troops and assets in the region—a reality not lost on the Iranians, even the Islamic Revolutionary Guard Corps (IRGC). Context matters here: U.S. forces in the Gulf easily can flex their might through routine exercises and other activities at sea. The mere presence of tens of thousands U.S. forces in the region in itself speaks volumes. These forces have to be, and are, responsible and professional enough to know the difference between petulant acts or miscalculations, and real threats or acts of aggression. And the truth is they acted as they should have.

The United States has to be equally mindful, however, that Iran’s actions also demonstrate a well-worn penchant for violating international norms. These acts are of an Iran that is not looking to reel in its aggressive behaviors, but rather to flaunt its ability to push the limits. The United States must consider Iran’s behavior a test of the broader international order that Washington seeks to support, and thus its implications for U.S. strategic interests lie beyond just the Middle East.

Although Iran’s actions may not have warranted an extreme U.S. response, the narrative of U.S. concession toward Iran is difficult to combat. It complements the oft-repeated refrain that the United States is withdrawing from the region. The perception among partners as well as other observers is that America is less willing to address Iranian aggression for fear it might derail the nuclear deal. One can argue the merits of this perception, but from a policy perspective, it is almost beside the point. Perception creates its own reality, and in the case of the Middle East, perception is fueling tense dynamics. Iranian willingness to test U.S. commitment to respond to Iran’s behaviors during JCPOA implementation will aggravate these tensions.

It is possible to construct measured yet relevant responses to Iran’s continued provocations without undermining the JCPOA. A responsible approach should focus on a handful of short-term proportional steps, building on existing activities that demonstrate the United States is committed to fulfilling its pledge of combatting aggressive Iranian behaviors. It also is worth remembering that Iran has as much, if not more, to lose should its actions hinder JCPOA implementation. We should assume Iranian calculations will take into account this significant risk. America retains more ability to execute its policies against Iranian aggression—not less.

Focusing on international norms and multilateral responses: UN Security Council Resolution (UNSCR) 2231 affirms that Iran's ballistic missile activities constitute violations, at least for the next eight years. In response to the latest ballistic missile tests, the United States should consider whether such violations are worthy of a serious discussion in New York. Recognizing the challenges of UN action, especially for activities that are not a direct Iranian violation of the core elements of the nuclear deal, America should at minimum seek to expand upon the U.S. sanctions listings announced on January 17 beyond just named individuals to more significant entities involved with the ballistic missile program, and press European partners to take commensurate actions under their national authorities. In the context of the upcoming U.S.-Gulf Cooperation Council Summit in Riyadh later this month, it is also important to make good on the promise to increase partners’ ballistic missile defenses. While multilateralizing such a defense architecture is fraught with challenges, equal attention and action should be focused on bilateral defenses that are complementary to and can build toward a multilateral architecture in the short term.

In the case of the U.S. sailors’ arrest and detention, the United States should use the results of the pending investigation—which presumably will show the U.S. sailors should have been granted the right of innocent passage as they acted in error—to combat the narrative that Washington was too quick to thank Iran for releasing the crew despite Iran’s aggressive action taking the sailors into custody in the first place. Conceding the legality of Iran’s actions, once the investigation is complete, may establish a problematic precedent. And Iran shouldn’t be allowed the argument that possible spying is justification for its arrest at the same time it is flying unmanned UAVs over U.S. naval vessels. Beyond the issue of innocent passage, Iran’s use of the detention for propaganda purposes flies in the face of how responsible international actors conduct themselves. There is little risk to America saying so publicly and definitively.

Responding to provocative regional behavior: UNSCR 2231 also maintains a ban on Iran’s export of conventional arms for five years after implementation. There arguably is no greater display of Iran’s aggressive behavior than its continued provision of illegal arms to its proxies in the region. One of the most relevant U.S. tools is its ability to track and interdict such shipments. Such ongoing U.S. activities should be strengthened. Given the sensitive nature of unilateral U.S. interdiction, priority should be placed on working in conjunction with key regional partners to execute such operations. Often a show of force is enough to make the point, as in the example last year when America deployed warships off the coast of Yemen, forcing Iran to very publicly stand down and turn back its arms shipments. Public exposure, whenever possible, is key.