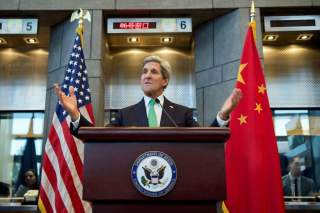 Discussing U.S.-China relations is almost a recipe for misunderstanding, even among people who ostensibly speak the same language. Some misunderstandings are deliberate to discredit the advocate; some are simply inadvertent because of the emotional charge of the issue. The United States and China once cooperated and saw each other as useful strategic partners, but much of that changed after end of the Soviet threat and Beijing’s violent crackdown on demonstrators in 1989. The desire to return to that kind of camaraderie, to prevent the emergence of another Cold War, and to find some way to avoid history’s repeated and tragic tale of great and rising powers coming to conflict necessarily makes the public discussion heated. The potential consequences are catastrophic.

The idea of imposing costs or forcing China to face consequences for its actions is easily misunderstood as abandoning the carrot for the stick as a matter of U.S. policy toward China. On some issues and for some analysts, moving from a cordial to an adversarial approach may well be the case in areas such as South China Sea or cyber. Even these, however, are selective, based on Chinese actions in particular areas, and focused on continuing the basic U.S. policy of shaping the choices Beijing can make while encouraging a positive course. Shaping Chinese choices necessarily requires a mix of incentives and disincentives, but the latter can only be as strong as the will to act upon them.

It is worth noting that even Michael Pillsbury in his harshly critical book on U.S.-China relations, The Hundred-Year Marathon: China's Secret Strategy to Replace America as the Global Superpower, does not advocate replacing the carrot with the stick. His policy proposals deal most strongly with better assessing China, dealing with Beijing as it is run under the Chinese Communist Party (CCP), and avoiding being duped. They boil down to how President Barack Obama characterized the way to run foreign policy: “Don’t do stupid stuff.”

The idea that imposing costs and consequences on China for actions inimical to U.S. interests means abandoning incentives to browbeat Beijing seems premised on the assumption that such consequences mean the beginning of a containment strategy and the end of engagement.

Engagement is not going away. Suggestions of its demise are premature. If you want to persuade or dissuade someone, the only way to ensure your signal was sent, received, and understood is to meet face-to-face, keep dialogue open, and ensure senior officials understand how the other side interprets actions. Apart from that supercilious point, the U.S.-China relationship, regardless of ostensibly shared interests, is not a fragile flower that will wilt at the first frost.

On January 17, 1980, Michel Oksenberg wrote a memo recapping the trip of then-Secretary of Defense Harold Brown to China, observing “Our China relationship is now fully mature, comprehensive, and complex… Our relationship is mature in that each side making requests of the other in a frank and straightforward manner, confident that raising tough issues and underscoring their importance will not disrupt the relationship. The relationship is losing some of its fragility and acquiring some resilience.” The U.S.-China relationship survived Tiananmen. It survived the comparatively minor scandals of the Clinton era, like the Yinhe incident, campaign finance, and the almost certain theft of U.S. nuclear secrets. It survived the EP-3 incident in 2001 in which, from a U.S. perspective arguably backed by international law with which Beijing is signatory, the Chinese held U.S. servicemen hostage. The basic truth of Oksenberg’s observation still stands and probably is truer today than when he typed the memo.

Despite its ups-and-downs, the U.S.-China relationship is not only resilient but unavoidable if for no other reason than the world’s two largest economies are vastly different, creating trade and investment opportunities for both sides. Billions of dollars change hands. Millions of people cross the Pacific each year for education, business, official exchanges, and personal travel. China and the United States find each other in the UN Security Council as permanent members, and nothing can be resolved there without some consultation. Short of the outbreak of a full-scale war, these things will not stop overnight. The working-level discussions may be vulnerable to the political climate; however, each side finds ways to come back to the table.

Moreover, U.S. policy toward China since the Clinton Administration has not been focused solely on engagement. The common name for it is hedging. The doors are open to China, but, should it choose a different path, Beijing might find some alternative paths blocked. Put another way, Washington is trying to deter China from making a play for regional hegemony, confronting the United States, and otherwise taking actions that undermine the U.S.-led security and economic order. As the godfather of deterrence Thomas Schelling noted, deterrence is improved by “the threat that leaves something to chance.” That chance, however, is not about whether a response or consequence will emerge, but rather its magnitude. To make hedging work, Washington has to respond when China drifts or drives toward those behaviors that the United States is trying to prevent.

So what are consequences if not coercion?

One way for consequences to emerge is to refuse to engage in behaviors that Beijing has exploited, like assisting in the commercial transfer of technologies that China wants for its own industry. For example, despite the widespread knowledge of state-protected and -sponsored intellectual property theft in sectors that Beijing identifies as strategic, Washington is considering supporting another civilian nuclear cooperation agreement (a so-called 1-2-3 agreement), which establishes the framework for commercial nuclear deals with China, including Westinghouse’s sale of the AP1000 nuclear plant to China. The $24 billion deal is only the beginning. Westinghouse believes it can get a 25–30 percent share of China’s planned 200 nuclear plants in the coming years. The deal, however, includes complete technology transfer to their Chinese partners, and, as recently noted in Washington, “Westinghouse’s AP1000 technology is a crucial component to China's planned nuclear export program, though China only holds a license to use that technology domestically.” Unless Beijing decides nuclear is no longer a key industry to support, China basically has made a commitment to ripping off Westinghouse after throwing them a small bone. And this would not be the first time foreign companies have gambled that Chinese engineers could not duplicate their work. Because it involves nuclear technology, Washington shapes the framework through which Westinghouse and similar companies can do business with China.

The stalled Trans-Pacific Partnership (TPP) trade agreement certainly can be held out as a carrot for China. Chinese promises of economic reform and intellectual property rights protection must take place before gaining entry. That is a consequence of previous Chinese actions. It is not wielding a stick to browbeat Beijing into submission or abandoning President Richard Nixon’s goal of including China in a family of nations rather than leaving it outside to nurse its grievances. To the extent that TPP can be viewed as exclusionary and coercive, such a view rests on wholesale acceptance of two ideas. The first is Beijing’s definition of the China model, which privileges the state’s role in the economy through state-owned enterprises and the party’s role in guiding the rest of the national economy. The second is that the United States should not have a say about foreign countries’ access to U.S. markets.

The China policy of the United States aims to shape Beijing’s choices through persuasion and, if that fails, by deterring Chinese leaders from choosing a path that undermines the international order. That means at some point Washington will need to back up its talk about Chinese choices, and that means facing the reality of what Beijing is doing or has done—especially if those choices are difficult to roll back. Sometimes an elbow needs to be thrown to keep the game fair; sometimes the proper response is silence, a refusal to engage in old mistakes.