Is a U.S. Recession Simply Inevitable? 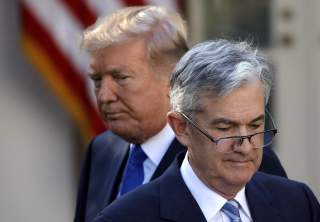 With the leadership of the U.S. central bank, the Federal Reserve, about to change, it is worth thinking about how the economy is likely to perform and when the next downturn in growth and employment is likely to occur. Talking to institutional investors, optimism is as widespread as it was in the early part of 1929. One might think that the U.S. economy is on a perfect trajectory for sustained growth and low inflation forever, even as the Fed raises the cost of credit.

It has been three decades since the October 1987 financial crisis, when the trading strategies of some of the largest financial institutions caused the markets to collapse. Black Monday was primarily a Wall Street event, however, and had little impact on the U.S. economy. It was thus quickly forgotten. Indeed, at the time of the crisis, federal funds were at 7 percent and short-term U.S. interest rates actually rose for two years until peaking near 10 percent in 1989.

Two decades later, Washington and Wall Street came together in another wonderful collaboration, mixing low interest rates, bad policy regarding housing and basic greed from some of the nation’s biggest banks. Then Fed Chairman Alan Greenspan took rates down to near zero in the early 2000s. The result in 2008 was a liquidity crisis that caused the annihilation of nearly half of the country’s largest financial institutions.

The key driver behind the financial crises in 1987 and 2008 was the Federal Open Market Committee (FOMC), which has used progressively lower interest rates in a largely failed effort to boost job creation and income growth for U.S. households. Instead, this has created a series of price bubbles in asset classes, ranging from energy to residential and commercial real estate and even stocks.

For an America caught up in the housing mania of the 2000s, 2008 was a financial crisis that was felt on Main Street as well as in the financial markets.

Following the 2008 debacle, the FOMC led by Chairman Bernanke and later Chair Janet Yellen applied more of the same medicine in terms of low interest rates, although on a far larger scale. But the big change was the open-market purchases of securities by the Fed and other central banks—a practice euphemistically called “quantitative easing,” or QE.

Not content with merely pushing down interest rates to virtually zero, the Fed adopted the radical view that zero or even negative interest rates represented a form of economic stimulus. As such, the Fed then went on a buying spree and used excess reserves from banks to purchase some $4 trillion in bonds—all in an effort to manipulate the risk preferences of investors and, so the story goes, boost growth.

The Fed certainly succeeded in manipulating the credit markets, helped by other central banks in Europe and Asia. In total, central banks globally purchased public and private assets to the tune of $20 trillion in open market purchases of bonds and even equities. In addition, U.S. companies have repurchased some $3 trillion in stock via transactions that were funded largely with cheap debt thanks to the FOMC. U.S. debt markets have seen record issuance in the past five years.

In the United States, the net effect of the Fed’s social engineering have been soaring prices for all manner of real estate properties in affluent coastal markets. Credit metrics for banks look too good to be true, buoyed by the Fed’s market machinations. But, as I discussed recently with Max Keiser, what happens when the Fed and other central banks stop actively manipulating financial markets?

Among the financial analyst community, ever more clever justifications for current stock market prices are seen every day. Few ever venture to comment on the apparent connection between central bank asset purchases, stock repurchases funded with debt, and soaring asset prices. The Fed has succeeded in engineering a fabulous boom for financial engineers, but with little “trickle down” for American households.

One can argue that the recovery in employment and overall business activity has come about because of the intrinsic strength of the U.S. economy despite the Fed’s radical experiments in the bond market. The movement of GDP and short-term interest rates though do not suggest any connection between the Fed’s “stimulus” efforts and those same short-term interest rates. This fact has not gone unnoticed by investors, who are openly questioning how the U.S. economy will manage the unwind of the central bank’s portfolio.

Can Main Street maintain current levels of employment and growth if Wall Street goes through a period of low volumes and flat stock prices? Applying the rules of basic physics to the financial markets suggests that after a period of supra-normal returns and low volatility, the markets will experience the reverse once the Fed stops its supposed “stimulus.”

A number of economists and investment pros have openly begun to question the sharp appreciation in stock prices seen over the past year. But by and large the markets have managed to rationalize the Fed’s massive market intervention. It is worth recalling the words of Greenspan in his famous 1996 speech wherein he asked if "irrational exuberance" had begun to play a role in the increase of certain asset prices. He said:

We as central bankers need not be concerned if a collapsing financial asset bubble does not threaten to impair the real economy, its production, jobs, and price stability. Indeed, the sharp stock market break of 1987 had few negative consequences for the economy. But we should not underestimate or become complacent about the complexity of the interactions of asset markets and the economy. Thus, evaluating shifts in balance sheets generally, and in asset prices particularly, must be an integral part of the development of monetary policy.

Somehow, Chair Yellen and the other members of the FOMC can look at real estate and stock prices galloping along at double-digit rates of growth and conclude that inflation is low. It may be that inflation measured by consumer prices is moderate, but asset prices suggest that the FOMC has once again instigated a financial boom in major markets that could threaten a still uneven economic recovery.

While the recession in 2008 and beyond was driven by a sharp reaction to the financial market crisis, the recession of 2020 may be driven by the necessary adjustment following a period of radical central bank action. The real question though is whether the FOMC will allow the U.S. economy to slip into recession without more radical measures.

With Chair Yellen not reappointed, the Fed’s willingness to engage in radical policies like zero interest rates and QE is likely to be reduced. While Chairman designate Jerome Powell is a centrist who has supported the policies of Yellen, there is little support for the Fed’s large balance sheet or the use of bank reserves to fund these operations on Capitol Hill. This limits the policy options of the Fed in the event of a recession.

Since 1987, the U.S. government (i.e. the Federal Reserve) has turned market stability into an entitlement, particularly for the stock market. The degree of government intervention in the markets has grown enormously since Black Monday 1987, with no authority or even acknowledgement from Congress. This begs the question as to whether the Fed—or the White House and Congress—are actually in charge of economic policy. But you can be sure that the current occupant of the White House does not want to see any policies coming from the Fed that will detract from U.S. economic performance between now and November 2020. Yet in the end, President Donald Trump is held hostage to the policies followed by the Fed over the past decade and more.