U.S. Russia Relations: How Did We Get Here? 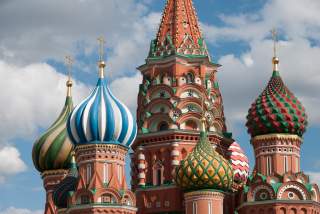 Ronald Reagan was my role model and my inspiration as I proudly served in the US Congress during the last two years of his tenure. I took Reagan’s words, and admonitions, seriously. In my opinion, no one had established more credibility in dealing with the collapse of the Soviet Union than Ronald Reagan.

It was Reagan who inspired me to author my first legislation in the US Congress which passed unanimously as an amendment to the National Defense Authorization Act formally acknowledging that the USSR was in violation of the ABM Treaty – the strategic Holy Grail of the liberal left. The ABM Treaty had been based upon the MAD (Mutually Assured Destruction/Deterrence) Theory that we embraced for 30 years.

I also remember a group of three US House Members who were escorted to the site of the Krasnoyarsk Radar ABM violation and who naively labelled the violation a minor oversight - despite Soviet General Nikolai Ogarkov’s later public admission that the Krasnoyarsk deployment had been ordered by the Politburo in ‘direct’ violation of the ABM Treaty.

If only we had followed Ronald Reagan’s common sense approach to US-Russia relations just imagine how different the world would be today. Dealing with Russia required the same diplomatic policy as in dealing with China, Iran, or any other international challenge – strength, consistency and candor.

Yet somehow, for some reason, we just haven’t gotten it. And so, as we approach a new Administration controlled by the political inheritors of the Reagan legacy, It serves us well to look back over the last 30 years of missed opportunities. The late 1980s and 1990s were filled with aggressive efforts in the Congress to demonstrate a strong, consistent and candid message to the failing Soviet state and the emerging proud Russian nation. We supported a strong deterrence through a robust military, a consistent standard of exposing Soviet/Russian actions and a candid acknowledgement of realities that would prevent our two nations from ever enjoying long-term peaceful collaboration.

In my view, successive administrations (Republican and Democratic) just never got it. In the Congress, we saw new opportunities for strategic collaboration when the Soviet Union collapsed, but White Houses remained stuck in the old US/Soviet mindset using the right words but not embracing the right strategies and actions. All of us were excited as Boris Yeltsin took office as the newly elected leader of a free Russia – I remember well his historic speech in the House of Representatives. But, in our rush to embrace Yeltsin we lost sight of Reagan’s admonition for consistency and candor.

In the Congress, we held hearings regarding the continued proliferation by Russia of weapons in violation of arms control agreements; hearings to document the fact that the Soviets had  preplaced military equipment and hardware strategically throughout the US and Europe as documented by Dr. Christopher Andrews and Chief Archivist for the KGB and in testimony by former KGB operatives Oleg Gordievsky and Stanislev Lunev; hearings to understand continued human rights abuses as documented by leaders like Galina Starovoitova, Lev Rokhlin and Alexander Lebed. Time and again in the 1990s the administration simply denied reality and showed the Russian people that we didn’t embrace the Reagan agenda of consistency and candor. When Starovoitova was murdered in her St. Petersburg apartment building, our State Department barely uttered a word.

When my friend General Lev Rokhlin was gunned down in in his own Moscow home, our administration quietly accepted the ridiculous story from the Yeltsin Kremlin that his wife was deranged and shot him - tens of thousands of ordinary Russian people marching through the streets of Moscow weren’t afraid to be “candid” and publicly acknowledged what they knew to be factual by proclaiming that Duma Veterans Affairs Committee Chairman Rokhlin had been assassinated in his own home because he dared to “embarrass” his Party leader/President Boris Yeltsin by demanding proper benefits for Russia’s Veterans.

And when General Lebed, who had visited the US numerous times and had testified before my Sub-Committee that “loose nukes” could not be accounted for just as renowned Russian Academician Dr. Alexei Yablokov had said in a previous Hearing – Congress took note and expressed outrage – while the White House tried to change the story. Lebed died in a mysterious helicopter crash as his momentum was building to become President of Russia.

The internal financial scandals in Moscow under Yeltsin were largely ignored in the White House for fear of embarrassing Yeltsin, even though the State Duma came within a handful of votes necessary to impeach Yeltsin. International Headlines screamed about the allegations of US and European Banks misappropriating funds earmarked for new infrastructure improvements throughout Russia as investigations emerged in the US and abroad.

As Congress attempted to examine these very allegations, American embassy officials in Moscow lied to a Congressional Delegation in an attempt to prevent a face-to-face meeting with top Russian Prosecutor Yuri Skuratov – who anxiously met with Members when contacted directly through Russian Duma Leadership. Ultimately, US Banking Officials were indicted by our Justice Department for massive diversions of Russian financial assets.

As Reagan had suggested, Congress had serious and candid discussions with Duma counterparts regarding the ABM Treaty and Ballistic Missile Defense. When my legislation was scheduled for a floor vote that mandated a National Missile Defense for America, colleagues from both parties and I travelled to Moscow days in advance (with Rumsfeld, Woolsey and Schneider as our guests) to candidly explain to our Moscow associates the reasons for our actions being to protect our citizens just as the Missile Defense System around Moscow deployed years earlier by the Soviet regime protected their citizens.

Even though our mandate for National Missile Defense called for bilateral cooperation with the Russians, the White House tried to cancel funding for the only cooperative missile defense program between our two nations (RAMOS). Duma Chairman Vladimir Lukin pleaded with me to restore funding for the program – with the unwavering support of my Senate Colleague Carl Levin we succeeded.

While we in the Congress held Russia accountable for stupid, and sometimes dangerous actions, we aggressively pursued bilateral programs to solidify friendships between the Russian and American people and build an institutional foundation for Russia’s stability.

Having represented the US in legislative exchanges focusing on the environment, energy and oceans with Russian Duma counter-parts, I was eager to convince new House Speaker Newt Gingrich and new Duma Speaker Ivan Rybkin to formally empower a bi-lateral Duma/Congress relationship. On the very day that Speaker Rybkin took his oath of Office, a group of House Members joined me in cementing that bilateral relationship with my good friend Steny Hoyer as co-chair. Dozens of Duma Deputies regularly travelled to the US (Graham Allison and the Harvard JFK School conducted an annual workshop for new Duma Deputies) and dozens and dozens of House and Senate Members travelled to Moscow and throughout Russia and the FSU nations.

Enabling Russian families to purchase a home we believed would help develop a middle class in Russia for long-term stability. Unfortunately, no underlying mortgage system existed in Russia because Communism denied private property ownership. Banker/Congressman Charles Taylor and Philadelphia Attorney John Gallagher boldly developed a strategy with Duma Leader Valentin Tsoi to implement a western style mortgage program entitled “Our House is Russia”. Communist Duma Speaker Gennady Seleznyov publicly endorsed the plan and signatures were obtained from every Regional Leader in Russia pledging support. Charles arranged a one-time appropriation to initiate the Plan only to have the White House re-allocate the funding for another purpose. Disgusted by White House actions, Charles self-funded a new program at Brevard College to train young Russians with the skills necessary for community banking and mortgage lending with the requirement that every student had to return to Russia after being trained.

Time and again in the 90’s we sent mixed signals, denied reality and pretended that things weren’t really what they were. I remember well the CIA Report that outlined illegal activities by Viktor Chernomyrdin – partner in the Gore/Chernomyrdin Commission. When Gore read the report about his colleague and partner, undenied press reports indicated Gore’s actions when he scribbled the word “bulls---“ across the cover.

And amazingly, in Yeltin’s 1996 re-election to a second term, when polls showed his popularity was amazingly low and that he was headed for a loss, American political operatives with the highest level US political connections, took up shop in the Moscow Presidential Hotel to guide Yeltsin’s re-election victory.

Russian people are not stupid – and they recognized that while they had concerns with Yeltsin’s instability and drinking problems, the US wanted “our” President re-elected to lead “their” country – and so it was!

The denials of reality in the 90’s by the Administration were historic – DOE Russian Fission Program Manager Jay Stewart fired for telling the truth about Russia’s nuclear build-up, Navy Intel Officer Jack Daly’s career ruined simply because he had demanded health treatment after he had been lasered in the eyes originating from a Russian trawler in the Port of Seattle, gravely ill Penn State Professor Ed Pope illegally detained in a Moscow prison while our embassy did little to release him for fear of embarrassing the Yeltsin Administration, removal of senior intelligence analysts like Fred Fleitz and Gordon Oehlers who simply told the truth to Congress about administration efforts to distort and deny reality to suit pro-Yeltsin political strategies.