U.S. Spaceflight Turns 60: Why The Stakes Are Higher Than Ever 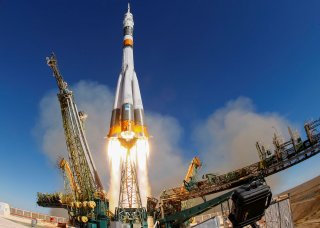 For the past year, the world has been gripped in the throes of tragedy, loss, and despair, with the scourge of coronavirus ongoing. The start to 2021 has ostensibly been more of the same, with most Americans still stuck inside. Although there have been glimmers of hope, with progress on the vaccination front, there still is a long journey ahead. With conditions on Earth continuing to feel seemingly hopeless, Americans have more reason than ever to find something to celebrate, and May 5 offers such an opportunity. Sixty years ago on May 5, 1961, American astronaut Alan Shepard rode the Freedom 7 on a sub-orbital flight at an altitude of 116 miles, marking the first time that an American reached outer space.

For centuries, humanity had gazed up to the stars for answers to earthly problems, yet space remained out of reach. To many Americans, reaching space represented the apex of human accomplishment: the intersection of the achievements of high technology with an ethos of human exploration. Put differently, there was something uniquely American about the achievement—the identification of a new frontier to seek to explore, and the unbridled ambition to actually explore it.

As we recall with pride Shepard’s—and the nation’s—achievement, however, it remains important to situate it within a broader geopolitical context. Going into space was not solely for the benefit of humanity but took place against the backdrop of a space race between the United States and the Soviet Union. Beginning in the 1950s, both countries were eager to develop long-range ballistic missiles for the purposes of nuclear deterrence, which required the capability to get a projectile to reach an apogee in outer space. Being able to launch a satellite into orbit would also mean developing a capability to get a ballistic missile into space.

The stakes were higher than just ballistic missiles, however. Accomplishments in space were a salient part of the broader race between the United States and Soviet Union, with both powers attempting to establish the viability of their models of government. Accomplishments in space, after all, are “an enormously challenging yet rewarding task, reflect[ing] a country’s scientific, technological, and industrial strength.”

While the first American in space was an accomplishment, discussed less frequently is that the United States was beaten to the punch by the Soviet Union. The first human to orbit the Earth was Soviet cosmonaut Yuri Gargarin; when it came to launching a projectile into space, the Soviet Union was once again first, with Sputnik 1 launching successfully in 1957, kickstarting the space race. Just one month ago, a similar milestone was celebrated in Moscow, with the April 12anniversary of Gargarin’s trip to space marked by euphoric celebrations across Russia.

The United States ultimately won the space race, landing the first man on the Moon with the Apollo 11 mission and, as a result, claiming the mantle as the leading spacefaring nation. However, this victory came despite a slow start, with the slowing Soviet economy affording the United States the chance to outspend, out-launch, and outcompete their socialist counterparts.

On May 5, the sixtieth anniversary of an American accomplishment, we cannot merely look backward at the triumph of a historic achievement but must reach forward to a period of competition, defined by a mad dash for commercialization of space: a space rush. In this space rush, the stakes are higher, and finishing second is not an option—we may not get a chance to overcome a slow start.

That new space rush surrounds the commercialization of orbit. As the two of us noted in a recent Atlantic Council space strategy paper, humanity’s relationship to space is undergoing a shift from exploration and discovery to one of commerce and security, where routinized space activities can enhance prosperity back on Earth. No domain of space offers more promise than cislunar space, the sphere created by the Earth-Moon radius. While most space activity today is located in Earth’s orbit, cislunar space offers “energy, materials, and integrated intelligence,” with the Moon’s shallow gravity well allowing easy stationing of vehicles in orbit. The commercial and military advantages to cislunar space are obvious, ranging from resource extraction and on-orbit manufacturing to the permanent stationing of military satellites with low-latency periods.

However, the United States is not the only country that recognizes these benefits. Chinese president Xi Jinping has made clear his belief that prosperity on Earth will follow achievement in space, and key Chinese agencies such as the China Aerospace Science and Technology Corp and the China National Space Administration have set a series of ambitious goals in space: exploration of the far side of the Moon, crewed labs on the Moon, asteroid mining by 2040, and more.

As with the last space race, achievements are zero-sum—finishing in second means losing out. Space may be a multi-trillion-dollar market with a first-mover advantage, where the winner sets the rules of the road. While a U.S.-led model for space would mirror the liberal international order on Earth, a Chinese-led model very likely would include anti-competitive economic practices, a disregard for democracy, and contribute to making the world safe for authoritarianism of various types.

Beyond the commercial and military benefits of space, losing this rush for space also means conferring upon China the prestige that accompanies great achievement in space. 2011 and 2016 Chinese white papers have made clear this rationale: success in space positions China as a technological powerhouse, with space accomplishments bolstering China’s overall national influence. A more reputable and legitimate China will likely seek new, ambitious space projects, pulling U.S. partners in Europe into its orbit. As China works toward building its own space station to rival the U.S.-led International Space Station (ISS), a concomitant risk emerges of China being the partner of choice for twenty-first-century space activities. Having recently launched the Tianhe-1 launch module of their space station, China plans to have the station be operational by 2022. As the ISS begins to phase out, this could position China as the only nation leading a space station.

Policymakers cannot lose sight of the fact that the rush has already begun—and the United States is badly losing. In 2019, China was the first nation to send a Lunar probe to the far side of the Moon with the Chang’e 4 mission, while also being the first nation to launch a quantum satellite into orbit, among other accomplishments. As China was making history on the Moon, the budget for the National Aeronautics and Space Administration (NASA) was flatlining in the United States, with NASA lacking even a rocket capable of getting back to the Moon.

However, hope is not lost. Sixty years ago, when the first American made it into orbit, the United States may have finished in second place. Yet, despite losing the human spaceflight battle, the United States still won the broader space race war and, with it, emerged victorious in the broader geopolitical contest with the Soviet Union. Indeed, the United States can tap into many of the competitive advantages that won the first space race. Despite impressive accomplishments in space, China does suffer from a series of structural and economic limitations. While state-run economies can fund ventures and direct activity by fiat, they struggle with generating innovative, out-of-the-box thinking, dissuaded by an authoritarian government. China has no analogue to the vibrant private sector of the United States, where economic incentives drive transformations of the space economy. Examples in recent years abound, such as the reduction of launch costs by SpaceX, the planned commercialization of spaceflight, the revolution in constellations of small satellites, and many more.

Time is ticking to lean into the comparative advantages of the United States, however. The sixtieth anniversary of Alan Shepard’s famous flight should be a moment of pride in all that the country has accomplished, as well as a reminder: if America doesn’t act, then its rivals will act, forcing America to move rapidly to make up ground. In this new space rush, the United States cannot afford to finish in second. If the past year has taught us anything, it’s that the American spirit is indomitable and can persevere in the face of challenges. Let’s work to have something to celebrate in space, as we return to the Moon—and beyond.

Raphael J. Piliero is a member of the Young Global Professionals Program for Forward Defense at the Atlantic Council’s Scowcroft Center for Strategy and Security. He graduated with Georgetown University with a Bachelor of Arts in Government.

Opinions, conclusions, and recommendations expressed or implied within are solely those of the authors and do not necessarily represent the views of the Air University, the United States Air Force, the Department of Defense, or any other US government agency.