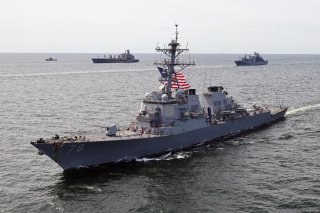 On Sept. 3, China’s vice foreign minister launched another round of criticism against the United States government for talking about the United Nations Convention on the Law of the Sea (UNCLOS), the body of international laws governing maritime issues and disputes. Chinese officials are still angry that in January 2022 the U.S. Department of State published a thorough critique of China’s maritime territorial claims in the South China Sea. The intensity of the Chinese reaction indicates this is not merely a legal squabble. U.S. support for UNCLOS may be crucial to preventing China from achieving one of its major geopolitical goals: establishing a sphere of influence over Southeast Asia.

Senior People’s Republic of China (PRC) officials repeatedly insist the Chinese government will never seek a sphere of influence in Southeast Asia. Southeast Asians are rightly skeptical. As they pursue their prosperity through trade with and investment from China, most Southeast Asian countries fear domination by China and the loss of their sovereignty. Even in Cambodia and Laos, the Southeast Asian states most penetrated by PRC influence, the accommodation of China by corrupted political elites does not necessarily reflect the wishes of the broader society.

The PRC, which ratified UNCLOS in 1996, claims it has “sovereignty” over the roughly 90 percent of the South China Sea enclosed by the infamous nine-dash line. While Beijing has not specified precisely what that means, we know the Chinese government claims the right to unilaterally close parts of the South China Sea outside of China’s lawful exclusive economic zones (EEZs) to activities by foreigners including fishing, surveying, and drilling for hydrocarbons. Beijing periodically declares sections of the high seas off-limits to all foreign ships and aircraft because of PRC military exercises. The Chinese government also tries to restrict the presence of foreign military units in areas where UNCLOS rules allow peaceful transit.

Should Beijing attain international acquiescence to these acts of encroachment, China will have taken a large step toward sub-regional hegemony. And bolder Chinese assertions of ownership would likely follow, possibly including selective restrictions on the commercial shipping of countries out of favor with Beijing that rely on the sea lanes passing through the South China Sea.

The provisions laid out in UNCLOS are a bulwark against that outcome. Even with U.S. support for UNCLOS, the treaty’s ability to restrain PRC ambitions has been limited. Without U.S. support, however, UNCLOS would be no more than a collection of rules and principles from which Beijing would selectively quote bits that happen to align with the PRC’s agenda, while disregarding the rest.

The United States has an unmatched capability to counter Chinese encroachment in the South China Sea by organizing security cooperation in the sub-region, conducting military exercises, and carrying out “freedom of navigation” operations that demonstrate rejection of unlawful PRC claims through transits by U.S. Navy vessels. Unusually forceful U.S. signaling might have dissuaded Beijing from building a military base on disputed Scarborough Shoal, for example.

The most persuasive evidence that Beijing sees U.S. support for UNCLOS as a substantial impediment to PRC plans for a Southeast Asian sphere of influence is Beijing’s reaction to that support.

PRC officials and government-controlled media have consistently asserted that the United States has no standing to invoke UNCLOS because Washington has not ratified the treaty. Some non-PRC observers, as well, have unfortunately repeated the argument that Washington is “hypocritical” or “lacks credibility” when it calls for adhering to UNCLOS.

This argument would be valid only if the United States did not itself follow UNCLOS rules. But although the U.S. Congress has not ratified the treaty, the U.S. government recognizes UNCLOS as part of customary international law and obeys it accordingly. As Gregory B. Poling points out, “for every American involved in maritime affairs, whether naval, commercial, or scientific, UNCLOS is effectively the law of the land.”

Moreover, it is highly doubtful that, as some claim, the United States ratifying UNCLOS would to any significant degree smooth over Sino-U.S. tensions in the region. Washington would still be, from China’s point of view, an adversary opposing Beijing’s preferences. Even without the non-ratification argument, Beijing would continue to assert that the United States lacks standing in the South China Sea dispute because Washington is not a claimant.

PRC commentators characterize U.S. involvement in the South China Sea disputes as “stirring up trouble.” More accurately, the United States provides backing for smaller claimants in the territorial disputes that have the Law of the Sea on their side, giving them an alternative to submitting to PRC intimidation.

In his remarks on Sept. 3, Chinese vice foreign minister Xie Feng gave three reasons why the United States “is in no position whatsoever to cite UNCLOS to accuse others.” First, Xie said, the United States has refused to ratify UNCLOS because of its unwillingness to accept certain of the treaty’s obligations, such as sharing resources from the seabed with developing countries. That is partly true, but irrelevant because, again, the United States follows the UNCLOS guidelines that apply to the South China Sea territorial disputes and on which Washington has called China out.

Second, Xie said Washington upholds UNCLOS “out of ulterior motives,” namely to use it “as a tool to smear, contain and suppress other countries.” Chinese diplomats routinely characterize U.S. policy toward China as “containment”—ignoring the massive flow of U.S. wealth and technology into China—and reflexively dismiss any criticism of PRC behavior as a “smear,” a manifestation of the victim mentality cultivated by the Chinese Communist Party.

Finally, Xie asserted that America is itself in violation of international law “by flexing its military muscle to challenge other countries’ claims.” This argument turns reality on its head. U.S. freedom of navigation transits are legal under UNCLOS guidelines and pointedly challenge Chinese claims that would unlawfully restrict what UNCLOS permits.

The United States similarly pushes back against PRC encroachment in the Taiwan Strait in contravention of UNCLOS guidelines. Beijing claims that the entire Taiwan Strait is covered by territorial seas (out to a limit of twelve nautical miles from the coast) and an EEZ. UNCLOS allows an EEZ of up to 200 miles, but also stipulates that all states enjoy freedom of navigation and overflight (including by military ships and aircraft) within a coastal state’s EEZ provided there is no poaching of resources. Beijing not only objects to UNCLOS-approved passages by U.S. ships and aircraft through and over the Taiwan Strait outside of territorial waters, but furthermore, the PRC itself sends uninvited military vessels into the EEZs of other countries such as the United States, Japan, and Australia.

A body of international law that has widespread acceptance—164 countries have ratified UNCLOS—can have a constraining effect on PRC behavior. Beijing often ignores the Law of the Sea, most egregiously the landmark 2016 Permanent Court of Arbitration decision that went against China. But Beijing also wants to be known as a law-abiding government. Hence China claims it “earnestly observes the Convention in a rigid and responsible manner.” With this potential leverage, UNCLOS is a natural rallying point for the United States, which wants to maintain a liberal regional order, and Southeast Asian countries trying to preserve their autonomy.