Use the America-Russia Summit to Bring Back Arms Control 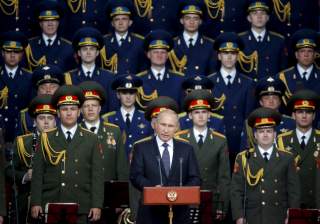 No sooner had the Trump-Putin summit been announced, than the predictable carping of neoconservatives and “Never Trumpers” began. But while a summit certainly carries some risks that a wily and well prepared Putin will run circles around Trump, the real risk to American national interests lies in failing to seek to try and improve Russian-American relations. The Bulletin of Atomic Scientists' recently moved its “Doomsday Clock” to two minutes to midnight—meaning the threat of nuclear war is now the highest its ever been—and many believe that there's a real risk of the two sides stumbling into war.

However, rather than addressing the risk of a catastrophic nuclear exchange, the United States and Russia are embarking on a full-scale nuclear arms race. During Putin's annual speech to Russia's Federal Assembly, he announced the development of several new nuclear missiles while also playing a video simulating a nuclear attack on Florida. For his part, President Trump has called for nuclear supremacy and suggested he might restart nuclear testing. Moreover, Trump has also rolled out a new nuclear strategy that makes it easier for him to start a nuclear war—a prospect that should petrify us all.

It’s not just about Putin and Trump, though. Hardliners in Moscow’s security establishment would likely push back against any effort to limit the development and deployment of the new weaponry Putin boasted about in his speech. And in Washington, meanwhile, the ongoing investigation into the Kremlin’s involvement in the election makes it politically difficult for Trump to pursue better relations with Moscow, even if he wants to. But for the sake of all mankind, nuclear arms control must assume a higher role in both leaders' list of priorities, and the upcoming summit presents an excellent opportunity to do so.

To begin with, the two leaders could begin discussions on extending the New Strategic Arms Reduction Treaty (New START) Treaty—a step that many high-level American, European, and Russian nuclear experts have called for. New START would limit the total number of deployed strategic warheads each side can deploy to 1,550—still more than enough to destroy each other and the planet many times over—and contains a number of valuable verification and confidence-building measures. In fact, Putin has already expressed an interest in extending New START rather than allowing it to expire in 2021—an offer Trump should take him up on. New START serves the national security interests of all sides and extending it should be a no-brainer.

Trump and Putin should also discuss the fate of the 1987 Intermediate-Range Nuclear Forces (INF) Treaty, which bans the two countries from developing or using nuclear and ground-launched ballistic or cruise missiles that can travel between 310 and 3,400 miles. American officials have accused the Russians of treaty violations on several occasions, provoking angry denials from Moscow. Maintaining the INF agreement in place is certainly in American interests, but Trump also needs to understand Putin's views on the Treaty, so that American officials can understand whether or not it is salvageable.

Finally, Trump and Putin should discuss restarting joint programs designed to improve nuclear security—including preventing nuclear terrorism—that were largely frozen since the beginning of the Ukraine crisis. For instance, as a 2016 report by Harvard’s Project on Managing the Atom explains, the threat of nuclear terrorism is more real than many realize—a danger that neither side can ignore. Luckily a clear roadmap for cooperation on nuclear safety and non-proliferation exists. It is the 2017 report, developed jointly by the American-based Nuclear Threat Initiative (NTI) and the Russia-based Center for Energy and Security Studies (CENESS), outlining a series of projects the two sides could undertake to improve nuclear security and safety.

To be clear, so long as the American-Russian relationship remains in such a poor state, it is unlikely anything concrete will be agreed on during the summit. However, as suggested by the heads of the Russian International Affairs Institute and Kennan Institute, the two presidents could, at a minimum, reiterate the joint conclusion from the 1986 Reagan-Gorbachev Reykjavik summit, that “a nuclear war cannot be won, and so should never be fought.”

The United States and Russia should also commit themselves to a policy of no-first-use of nuclear weapons. Additionally, they could agree to a multilateral treaty on ballistic missile defense systems that involves other states, not just the United States and Russia as the old Anti-Ballistic Missile (ABM) Treaty did. This would limit the capability of these geopolitically destabilizing systems, and prohibit their deployment beyond national borders.

It should also be possible for Putin and Trump to agree on establishing joint-working groups tasked with addressing the issues raised above at the technical level. After all, even during the darkest days of the Cold War both Washington and Moscow remained committed to nuclear arms control. As a result, a broader arms control culture developed over time, with specialist arms control communities on both sides keeping the channels of communication open. Even when concrete agreements did not result from these endless discussions, the time spent trying to understand each other’s priorities, interests, and fears helped reduce the possibility of a nuclear exchange. It’s critical that Putin and Trump agree to reactivate this arms control infrastructure now.

To be clear, many issues still divide the United States and Russia, most notably allegations of government interference in America’s elections. Trump will feel obliged to emphasize to Putin that Washington considers attacks on its democratic processes an existential issue. Putin will no doubt respond in kind. In addition, Trump cannot be seen as trading America's support for Ukraine for Russian nuclear cooperation.

Ultimately though, both Washington and Moscow must find a way to isolate nuclear cooperation from the broader issues of the American-Russian relationship. The risk of not doing so is simply too great.

Image: Russian President Vladimir Putin delivers a speech at the opening of the Army-2015 international military forum in Kubinka, outside Moscow, Russia, June 16, 2015. Putin said on Tuesday Russia would add more than 40 new intercontinental ballistic missiles to its nuclear arsenal this year and a defense official accused NATO of provoking a new arms race. REUTERS/Maxim Shemetov TPX IMAGES OF THE DAY​