Use the Iran Deal to Pursue Netanyahu’s Bombshell 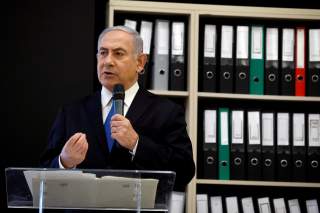 Last week, Israeli prime minister Benjamin Netanyahu dropped a bombshell: in January, Mossad agents stole some fifty-five thousand printed pages and 183 compact discs detailing Iran’s past convert nuclear weapons activities, by breaking into a warehouse and flying them out of the country. The significance of his disclosure was immediately controversial.

Opponents of the Iran deal, or Joint Comprehensive Plan of Action (JCPOA), immediately said this is further reason to tear it up. Defenders responded that there is nothing new here. Both are wrong. One of us (Samore) was a deal supporter, the other (Tobey) a skeptic. We both now believe that the disclosures offer the means that President Donald Trump seeks to improve and enforce the deal.

We do not know the full contents of the document cache, and therefore cannot yet judge its ultimate significance. The size of the trove suggests that it contains more details than had been previously known about Iran’s nuclear weapons effort. Moreover, even the sliver released so far, hints at undeclared materials, equipment, and facilities—such as information on an underground facility to produce nuclear weapons components. If the information is verified, it would prove yet again that Tehran failed to provide complete and correct answers to International Atomic Energy Agency (IAEA) inquiries into the so-called “possible military dimensions” of Iran’s nuclear program, as provided by the JCPOA. Finally, there are hints about relatively recent activities by Iran’s Organization for Defensive Innovation and Research, which the Obama administration sanctioned in 2014 as a “Tehran-based entity that is primarily responsible for research in the field of nuclear weapons development.”

The disclosure, however, does not justify tearing up the Iran deal. To the contrary, the JCPOA should be used in three specific ways to respond to Iran’s deceit. First, the agreement establishes a Joint Commission to resolve compliance issues, with a fifteen-day deadline. The United States and other concerned parties should take the matter to the commission, seeking a strengthened mandate for the IAEA to investigate this new information.

Second, the deal anticipates “an exclusively peaceful, indigenous nuclear program, in line with scientific and economic considerations,” evolving gradually “at a reasonable pace” after the restrictions on Iran’s enrichment program begin to expire in eight years. Iran has said that it will eventually increase its enrichment capacity twenty-fold. The United States should seek a declaration by the non-Iranian Commission members now that any such expansion would violate the JCPOA—unless the IAEA can verify that any and all illicit activities substantiated by the agency have ceased.

Third, Annex T of the JCPOA contains specific prohibitions on nuclear weapons-related activities by Iran. The IAEA should investigate whether or not any of the work detailed in Israel’s revelations involve such activities. If the agency finds that they took place, the associated equipment and facilities should be identified and removed or rendered unusable.

These three actions would substantially strengthen the JCPOA. They would correct a serious flaw, that Iran was never required to account completely and correctly for its past weaponization work, leaving open the possibility that Tehran would return to it. If successful, these three actions would also make less dire the problem of the deal’s relatively brief duration.

Iran will likely resist. Yet, success will require cooperation by Iran, even if it is under duress. The IAEA will need access to people, documents, equipment and facilities. If Iran balks, the JCPOA’s enforcement mechanisms, including a return to sanctions, must be enforced. The United States and its allies control five of eight votes on the commission, and the deal’s provisions make reimposition of sanctions for good cause relatively simple.

Will the allies go along? They should for two reasons. First, they too have a stake in Iranian compliance. Second, this path offers the best hope of preserving the JCPOA. Will President Trump pursue this course? He should too. It would vindicate his position that the deal was flawed, and offer the means to fix it. Better still, it would keep the United States and its allies united. If, on the contrary, President Trump withdraws from the deal as he has threatened, the United States would lose the standing to use the JCPOA to investigate the new information produced by Israel’s coup. At the very least, President Trump should delay withdrawal from the deal until the IAEA can investigate this new information and report to the Commission.

Amazingly, the intrepid Mossad and Prime Minister Netanyahu may have breathed new life into the JCPOA. This is the sort of creative chaos President Trump claims to relish. He should put it to good use.

William Tobey is a Senior Fellow at the Belfer Center and former Deputy Administrator for Defense Nuclear Nonproliferation at the National Nuclear Security Administration.