The Value of Violence on Hong Kong's Streets 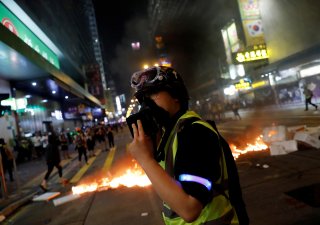 In 2019, the Chief Executive, Carrie Lam Cheng Yuet-ngor, intended passing an extradition bill amidst fierce objections from various sectors of Hong Kong society. Large-scale peaceful demonstrations in June of that year were unable to force Carrie Lam to withdraw the bill, however, it is believed that she was simply acting on orders from the Liaison Office of the Central People’s Government in the Hong Kong Special Administrative Region (HKSAR). Faced with a strong common political opponent, the various opposition factions felt that it was not worth their time dwelling on petty differences. Instead, they put these aside in a show of solidarity, emphasizing that they were “contributing in their own way” for the good of the protest movement—the first time Hong Kong civil society has accommodated a hybrid form of protest. That said, the debate over whether violent protest or nonviolent resistance is preferable, which often implies that they are mutually exclusive, is still prevalent in the public sphere.

Some, if not all, adherents to nonviolent protesting feel that escalating the violence undermines the purity of the movement and gives the Chinese Communist Party (CCP) and the HKSAR government the excuse to crack down on the protests. While violence is limited to throwing petrol bombs, smashing traffic lights, blocking roads and railways, and vandalizing “blue” shops and other institutional office buildings seen as betraying the people of Hong Kong’s interests, the Hong Kong Police has been able to repress these acts relatively easily by firing tear gas, rubber bullets, water cannons, and even live rounds. Given the vast inequality in firepower between the protesters and the Hong Kong Police, the long-term effects of violent protests in achieving the intended goals have been called into question.

Furthermore, it is contentious whether certain violent acts committed by the Hong Kong protesters, such as vandalizing shops and damaging the property of owners who openly declared their pro-government stance, count as terrorism—if terrorism is defined as a deliberately attacking noncombatants or/and their property in an attempt to coerce the political authorities to make important political concessions. It is noteworthy that France’s militant vegan activists, who did something similar in an attempt to obstruct the normal operation of the meat industry, are regarded as terrorists by butchers and some who enjoy eating meat. The Hong Kong Police claim that while they respect citizens’ right to peaceful protest, they will not tolerate roadblocks, vandalism, or vigilantism. The Hong Kong and Macao Affairs Office of the State Council regards these types of violent acts as a sign of the rise of terrorism in the city.

However, supporters of nonviolent protests have failed to persuade the public that there is reasonable hope to achieve the goals through nonviolent means; despite showing that, statistically, nonviolent resistance around the world has a higher chance of success. Of course, nonviolent protests have no means of responding to the Hong Kong Police’s arbitrary termination and dispersion of peaceful protests, as was shown on Jan. 1, 2020, and Jan. 19, 2020.

By contrast, violent protests are not always counterproductive. For instance, Mohammaad Ali Kadivar, an associate professor of sociology and international studies at Boston College, and Neil Ketchley, an associate professor in the Department of Political Science at the University of Oslo, used the case of the January 25 Egyptian Revolution to illustrate that “unarmed collective violence” is sometimes capable of “diverting repressive forces away from frontline protest policing duties” and offering protection to peaceful protesters.

Even if some of the violent protests that took place in Hong Kong were morally controversial, it is questionable whether the Hong Kong Police have enough moral legitimacy of their own to condemn the protesters. After all, they are perceived by many as being the largest terrorist organization in Hong Kong. They have been repeatedly blamed for having a double standard in law enforcement, most notably refusing to show their warrant cards and arbitrarily using tear gas and rubber bullets to suppress protesters while turning a blind eye to their supporters’ violence. Prof. Ping-cheung Lo, director of the Centre for Applied Ethics at Hong Kong Baptist University and a scholar of just war theory, explained that the Hong Kong Police Force has been operating as a paramilitary force aimed at assaulting, punishing, and avenging themselves against the protesters, rather than merely arresting them and sending them to trial. Due to the emergence of numerous examples of police brutality, Prof. Lo argues that Hong Kong has entered into a status of quasi-civil war. Kai M. Thaler, an assistant professor of global studies at the University of California, Santa Barbara, argues that requiring the protesters to maintain their nonviolent discipline would, under these circumstances, place an excessively heavy moral burden on them.

While it is certainly true that the Hong Kong Police’s draconian response to peaceful protests gave rise to increasingly radical protests, it should be noted that violent protesters were also not without fault. First, it should be noted that using violence in self-defense against police brutality is morally justified only if the actions fulfill the principle of proportionality and the principle of discrimination. Neither indiscriminate attacks nor assaults on civilians who hold different political views publicly and/or damaging their property can easily be justified.

Also, despite contributing to forcing the HKSAR government to withdraw the extradition bill, it would be hard to argue that violent protests would be as effective at achieving the demands for an independent investigation into the conduct of the Hong Kong Police, the resignation of Chief Executive Carrie Lam, and true universal suffrage, not to mention overthrowing the HKSAR government and establishing a new regime.

In reality, there are limited options for protesters to further escalate the violence. Even if the violence was escalated, such as using real bombs and guns, the protesters would still be, if not more so, vulnerable to repression, since the inequalities of firepower between them and the Hong Kong Police would still exist. It is likely that the CCP and the HKSAR government are waiting for just such an escalation in violence to justify their repression.

Some may argue that violent protests could avenge the harm caused by the Hong Kong Police, but evidence suggests that they actually exacerbate the harm towards the violent protesters, especially in light of the fact that an increasing number of them have been severely beaten before being arrested. It is argued that if other factors remain constant, this trend will undermine the morale of the protest movement.

Furthermore, as Erica Chenoweth and Maria J. Stephan—the authors of Why Civil Resistance Works—have pointed out, violent protests, which are physically and mentally demanding, are adversarial to maintain broad-based participation. While the protesters are not well-trained to face state violence, most are unlikely to be prepared to take part in violent protests either. If violent protests rule out the possibility of peaceful resistance, then the scale of participation tends to diminish in the long run. Public sympathy towards violent protesters, if any, seldom contributes directly to street fighting. What they are more willing and capable of doing, however, is to convert their sympathy into forms of nonviolent resistance, such as consumer boycotts and voting.

It is safe to say that almost every person in Hong Kong now knows that the protests in Hong Kong were founded on but are no longer about demanding the withdrawal of the extradition bill. Infuriated by arrogant and unaccountable political leaders and the Hong Kong Police, the protesters emphasized that they will not stop until their demands for an independent investigation into the conduct of Hong Kong Police, the resignation of Chief Executive Carrie Lam, and true universal suffrage are met. Many of them believe that removing Carrie Lam would be largely meaningless since her successor would be just another pro-Beijing politician working against the interests of the Hong Kong people under the same political system. However, some moderates feel that a change of Chief Executive could be an opportunity to negotiate with Beijing and the HKSAR government.

Ultimately, at this point in time, it is difficult to conclusively say whether nonviolent resistance or violent protest is more effective in achieving the desired political goals of Hong Kong. Massive protests of both types have still failed to achieve any of the demands listing above—except of course the withdrawal of the extradition bill. Unless there is new evidence to show that one of them would be more successful, Hong Kong’s civil society has little choice but to show tolerance towards a hybrid form of protest, albeit with potential contradictions.

This article was originally published in Hong Kong Free Press on Feb. 16, 2020.

T-Fai Yeung is a research associate of the Department of Public Policy at City University of Hong Kong. He is also a blogger of Stand News, and has written for the Hong Kong Economic Journal and Ming Pao Daily News.